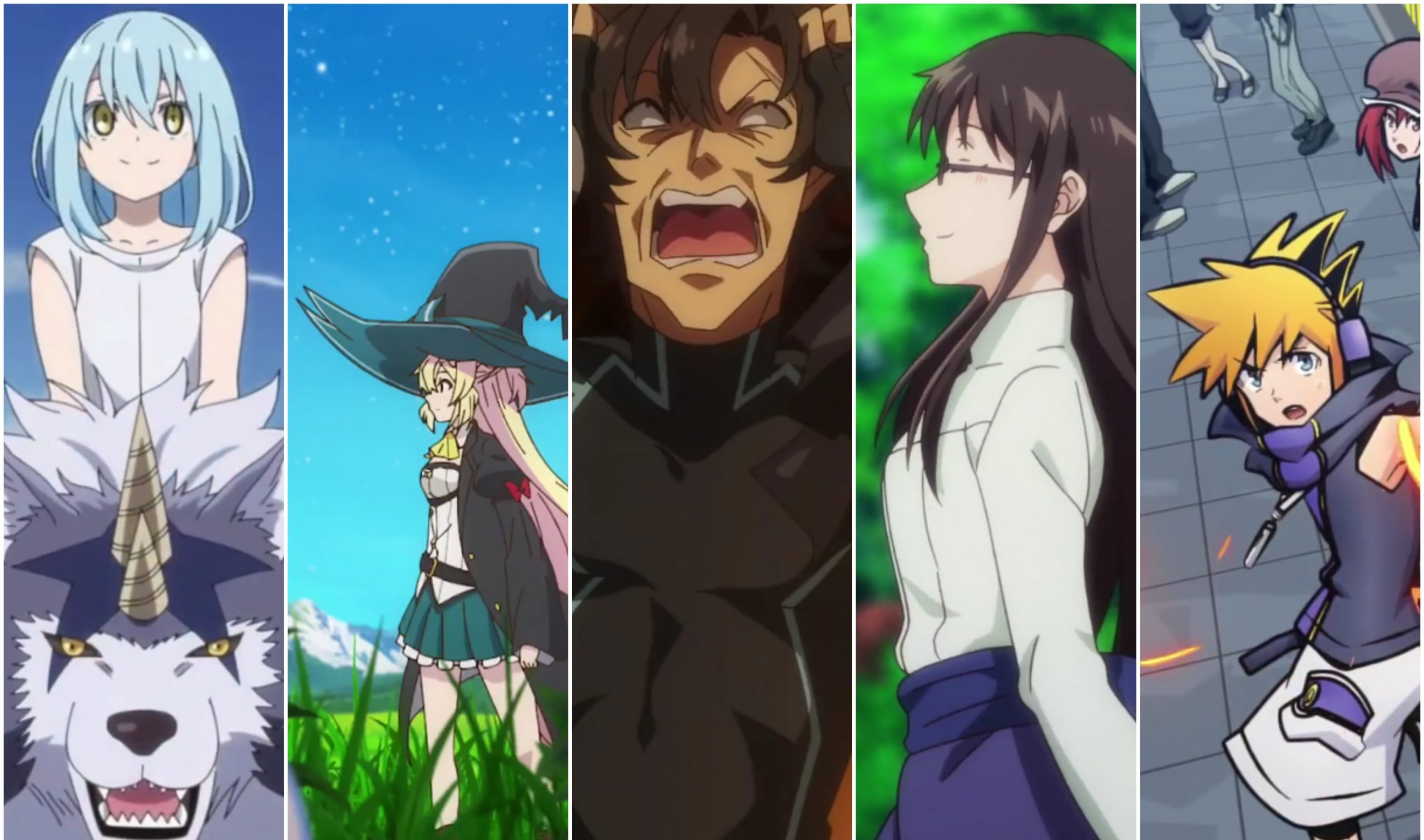 Isekai anime are a blessing to the entire anime fandom, undoubtedly. ‘Isekai’ literally means a different world or the otherworld. In anime, the isekai genre compromises series or movies centered around a character who gets transported, summoned, or reincarnated in a different world. Clichè isekai plots had a similar skeleton: an average human dies and gets reincarnated in a world of magic to defeat a demon lord. However, even if the plots are similar at times, isekai anime is loved for these demon lords and average humans to overpowered hero transformation.

However, in recent years, isekai anime has evolved, attracting more fans than ever. Anime of this genre like Re: Zero Starting Life In Another World, Tensura, Isekai Shokudo, and In Another World With My Smartphone have set a new level of auspiciousness. Isekai genres have a strong fanbase for the wide array of imagination that it has and provides to the viewers. Moreover, it’s always fun to imagine traveling to another world.

Winter of 2021 brought us some really great isekai anime like Tensura (season 2), Mushoku Tensei, Kumo Desu ga, Nani ka?, and Wonder Egg Priority. But don’t we still want more of isekai? Well, fret not. Spring 2021 has more isekai anime coming that will excite you to your bones! Here is a list of the upcoming isekai anime in spring 2021 that you should not miss!

1. The Slime Diaries: That Time I Got Reincarnated as a Slime

The first cour of the anime That Time I Got Reincarnated As A Slime Season 2 ended on March 30, 2021. A second cour is coming up in July. But not all of us have the patience to wait so long, especially when we are absolutely in love with the series. Perhaps this is why 8Bit decided to air a spin-off of the anime adapted from the manga called The Slime Diaries by Fuse and Mitz Vah. This is not a continuation of the original series but a fun journal of Rimuru Tempest’s protagonist.

The anime will feature the various hilarious encounters of Rimuru and all the other characters of the series. Catching up with the day-to-day life of the monsters is the main focus of the series. An altogether interesting concept, The Slime Diaries, is definitely something fans are anticipating, although it’s not related to the main story. After all, we always need more and more Rimuru-content for a serotonin boost!

2. I’ve Been Killing Slimes for 300 Years and Maxed Out My Level

For this one, I barely feel the need to explain since the title itself is so exciting. The anime is an adaptation of Kisetsu Morita’s light novel series. It is still ongoing and has a total of 15 volumes. Revoroot recognized its utmost uniqueness and thus chose it as its next project! Of course, Revoroot is not as established a studio as MAPPA or Kyoto Animation. But the trailer looks promising. I’ve Been Killing Slimes For 300 Years And Maxed Out My Level (or Slime300) might be its big break.

The anime will air on April 10. Its number of episodes is not announced, so it’s difficult to predict how long it will run for. You can watch the anime of Crunchyroll or Muse Asia.

Saturdays with yet another isekai anime are yet another thing to look forward to. The story revolves around Azusa Aizawa, who dies from overworking. She gets a chance to reincarnate as an immortal witch. She kills slimes for money in the new world, trying to lay low and enjoy her life. However, after years and years of killing slimes, she realizes that she has reached her limit. Not wanting to let go of her life as it is, she hides her strength.

Word gets out, and Raika, a dragon, challenges her. Azusa defeats her, and they become friends. Things start getting chaotic for Azusa when more and more people start learning about her, thus distorting her way of life. Unlike most mainstream anime, Slime300 has a female lead which makes it more interesting.

3. Combatants will be dispatched

Unlike the usual isekai anime, the character here is not reincarnated or summoned, but he moves to a new planet. Although this is not exactly the proper isekai anime you wished to find here, I still think it’s quite similar. The animation is an adaptation of the light novel series by the same name. It is written by Natsume Akatsuki, who also wrote the famous isekai series KonoSuba, and illustrated by Kakao Lanthanum. So far, the light novel has six volumes.

The anime will have a total of 12 episodes. It starts airing on April 4. JC Staff has given it the anime adaptation, and you can stream it on Funimation.

This action-comedy anime has got be on everyone’s watch list, and here’s why. The anime is about a clash between villains. The protagonist of Combatants will be Dispatched Combat Agent six, a member of underground cooperation. He is sent to another planet where he works hard to destroy their evil groups. The antagonists are less antagonistic than the protagonists. Meaning, you’ll be feeling bad for the villains as Combat Agent Six is quite the scumbag. Without spoiling anything, I would like to recommend this genius plot of a comedy anime to anyone who is into comedy, isekai, action, and big oppais.

Also Read: Combatants Will Be Dispatched Episode 2 Preview and Recap

Yet another light novel gets animated! This light novel by Yuka Tachibana is, however, quite different. It is slow but in a good way. It was relaxing to read, and I’m rather curious about how it will turn out in the anime adaptation. While most isekai anime are massively Shonen, Seijo no Mayoji wa Bannou Desu is a Shoujo and has a calm aura. It has good plot twists and will be a great watch for this spring.

The anime will start airing from April 6 on Funimation and Muse Asia at 23:30 hours (JST). The total number of episodes is not yet revealed.

The plot of the story is quite unlike your generic isekai anime. It revolves majorly around Sei, who is an office worker. She is summoned to a world that we’re looking for a saint. However, another person is summoned in the ritual, too, along with her. When the second girl is chosen to be a saint over her, Sei settles in the new world without regrets. She starts selling potions and cosmetics until her past starts catching up to her.

Amidst all the anime series coming up, here’s a return of an isekai anime this spring. The second season was announced back in April 2020. Well, congratulations to all those who were waiting on this anime because it’s finally here. Takuma’s journey as the demon lord is about to continue through more hilarious paths. The anime has changed their studio for this season to Okuruto Noburo and Tezuka Production. There is little information regarding why this change was made. However, let’s hope it only leads to good rather than a disaster.

The anime will air on Funimation, Crunchyroll, and Hulu. Its first episode will be released officially on April 9 at 1:28 hours (JST). There has been no announcement that revealed the number of episodes that the second season will have.

The plot of the anime has not been updated yet. But if you watched and liked the first season, you can check out the second season, too, once released. Diablo/Takuma’s story ahead is going to be another roller coaster ride, after all.

The anime also goes by the English name ‘The world ends with you. The source of the upcoming anime is an action role-playing game that was launched in 2007. Shin-Ei Animation and domerica have taken over the job of animating this series in their studio. The trailer looks promising and does not seem to have disappointing art and animation. Since the anime is based on the game, it’s hard to predict how the story will lead. But, the basic plotline is interesting enough to attract enough isekai lovers.

The main characters of the series are Beat, Joshua, Neku, Rhyme, and Shiki. As per the synopsis, Neku Sakuraba is a 15-year-old boy who has been teleported into a game called ‘The Reapers’ Game.’ He gains the power to read minds. Using his wits and skills, Neku must survive this game or face erasure.

The Winter season had some great anime series that came to an end, leaving behind an empty void in our hearts. However, spring is here, and so are some great new isekai anime that you should definitely not miss!

Sophia Hutchins and Caitlyn Jenner Seeing Each Other – True or Not?

Spoilers & Preview: To Your Eternity Episode 1