A cop tries to track down a Jigsaw copycat who is using the classic tricks to bring down every cop in the department. 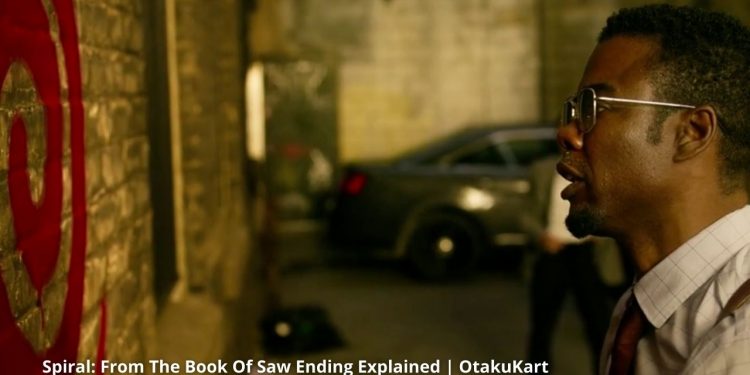 From Spiral: From The Book Of Saw

Spiral: From The Book Of Saw came off as quite an odd addition to the franchise. Especially with Chris Rock starring in it and people wondered if we are in for some goofiness. But instead, we got the comedian playing quite a serious role that adds a flavor to the movie. Although the movie more or less looks like a regular crime procedural, it still serves as a strong addition to the franchise. So here we are taking a look at how  Spiral: From The Book Of Saw directed by Darren Lynn Bousman adds up to this story of Jigsaw and its ending.

Spiral: From The Book Of Saw sees a killer taking inspiration from the original Jigsaw killer and murdering cops by locking them into most of the brutal traps. Targeting only cops was the main takeaway of this killer that clearly states that this isn’t Jigsaw. This is someone who is trying to take revenge on the cops. One of the Detectives becomes a key point in the case as he is specifically the one with whom the killer is communicating with gifts. Here is what went down in Spiral: From The Book Of Saw before we move to the ending.

Spiral: From The Book Of Saw Plot Summary

Spiral: From The Book Of Saw follows Detective Ezekiel “Zeke” Banks. One of the top detectives in his department. He has a bad history of working with local cops and opts to work alone. Still, his Captain Angie Garze forcefully teams him up with one of the rookies William Schenk. More or less, William is a fan of Zeke’s father Marcus Banks, and is honored to work with such a cop’s son. The first case they work together turns out quite a brutal one. A body is found cut in such a way that identifying the individual is nearly impossible.

Things started to turn around when Zeke started receiving parcels from the killer who is telling his motives. The video sees a Spiral and a message that the killer is targeting cops who did something wrong in the past. He is here to punish them. The first thing to catch Detective William’s eye is the fact that this could be Jigsaw. Zeke denies it and locates the place where this video could have been shot. Here he finds another parcel. This time containing the dead body’s tongue and the identity of the detective it belonged to.

The department starts taking this case seriously with Captain Angie involving herself. Zeke continues to lead the case with his father trying to interfere as well. At this point, Zeke is considering one of his former partners Peter Dunleavy whom he exposed to be one of the suspects. Especially with the fact that he is the one receiving parcels.

As this goes on, another cop who is also jealous of Zeke, with the help of CCTV footage tries to chase this killer only to find himself trapped too. This follows in with the death of William as well. Zeke receives both of their body parts in the parcel. On top of that, now his father is missing as well. As the city starts crumbling about Jigsaw’s return, Zeke continues to stay on the theory that this is an enemy of cops, not Jigsaw.

Spiral: From The Book Of Saw Ending Explained

The death toll continues with Captain Angie meeting her end with another trap. During every death, the killer gave everyone two choices to save themselves. In the end, no one survived. Believing this killer is a cop, Zeke takes a look at all the active accounts of the cops. Turns out one of them is his former partner Peter Dunleavy, but a cop at work also points out that his father’s account is active as well.

Chasing both of them leads Zeke to find out that both his father and his former partner are missing. Moments later he is kidnapped as well. He finds himself handcuffed in some dark place. Once he frees himself, he comes across Peter laid under another brutal trap. By the time, he unlocks him, Peter had already met his end.

Who Was The Killer?

From there on, William Schenk reveals himself to be the killer. He faked his death in order to get out of the suspicion. He has been planning this ever since he became Zeke’s partner. The reason, well Zeke’s former partner whom he exposed had killed his father who was innocent. With the fact that Zeke was right there, he never indulged until now. William offers him a partnership since they both want justice but have their own ways. Zeke wanted his father safe and sound and therefore he agrees.

So, William calls for the cops to report a shooting. He takes Zeke to his father but unfortunately, he is trapped too. William offers Zeke a gun with one bullet. He can either kill him or save his father. If he saves him, William will kill him anyway, and if he kills William, Zeke’s father still dies through the trap. The reason for trapping his father is because he was the one who passed on the article 8 that resulted in his father’s death.

With that, William also connected all the dots on why he killed the other cops. It takes Zeke to get hold of his situation but he chooses to save his father. In no time, he manages to grab hands on William as well. The cops were on their way too and to get in they had to get to the other side of the heavy door. The same door was connected to the wire of Zeke’s father’s trap. Breaking it only results in his father going back into the same trap again.

The wire makes Zeke’s father hold a gun in his hands and stand up against the entering cops. Believing he is about to shoot them, the cops kill him. While Zeke freaks out, William sneakily manages to escape leaving no clues behind. So one way or another, he was going to kill all his targets, and the cops never really stood a chance against him.

Also Read: We Need To Do Something Ending Explained