Soo-ho's real identity and intentions have been kept secret so far. Is he really the North Korean spy that ANSP claims him to be? 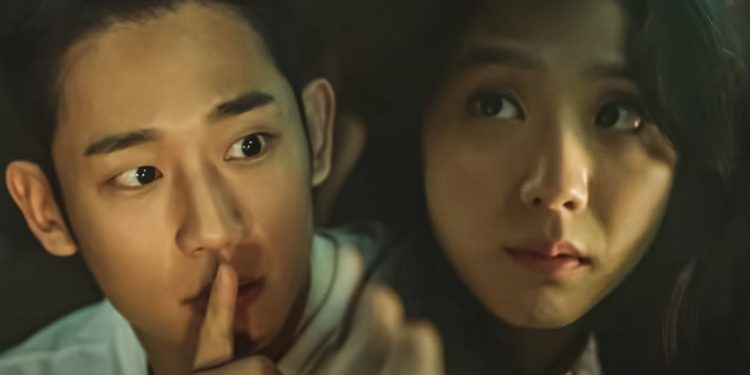 Is Soo-ho a North Korean spy?

Snowdrop revolves around Soo-ho, a mysterious young man whom Young-ro comes across on a blind date. Little did she know that her life would turn upside down after that fateful meeting. Call it coincidence or destiny, Soo-ho broke into Young-ro’s room after being severely injured in a pursuit. Soon, the cops raided the Hosu Women’s University accusing it of hiding a spy from North Korea.

However, Young-ro had complete faith in Soo-ho, and she ignored all the ANSP’s warnings like we ignore the terms and conditions page before installing an application. She thought Soo-ho to be another student protestor with no place to hide and convinced her friends the same thing. Well, Young-ro’s blind faith shattered when Soo-ho took the dorm hostage with his gang of anti-national armed men. Does that mean Soo-ho is really the infamous North Korean criminal? Here’s everything about Soo-ho’s true identity.

Is Soo-Ho a Student Protestor?

No, Soo-Ho isn’t an ordinary student protestor, but far more dangerous than that. In the period the series was set, South Korea was going through multiple protests from the students, and the protestors were often attacked or chased by the cops. Young-ro and others saved him from the cops because they thought him to be a helpless student protestor. Moreover, Young-ro’s brother was a protestor too who got caught and was forcibly sent to the army. She could resist comparing his brother with Soo-hoo; thus, she jumped into helping him without knowing anything about his identity.

Is Soo-ho a North Korean Spy?

Yes, Soo-ho is an infamous North Korean spy who goes by the alias name Taedong River 1. Lee Gang-mu, the legendary Black Tiger, has been pursuing him for quite some time, and every time Soo-ho managed to escape with a final trick up his sleeves. Berlin, Munich, Frankfurt, and Warsaw, he followed Soo-ho to everywhere only to catch him red-handed in Seoul. In their years of chasing, both of them had gone through numerous near-death situations.

Not to mention, Soo-ho isn’t just another spy. He is also the son of Lim Ji Rok, Deputy Director of the United Front Department, so North Korea risked everything just to bring him back to his country. He was sent to South Korea with the top-secret mission of bringing Professor Han to the North. However, not all the North Korean higher-ups had complete faith in him, so they hired a man just to dispose of Soo-ho if needed.

At the time of writing, only five episodes of Snowdrop are released, and not much is known about Soo-ho’s past. He was sent to Germany probably with another one of his missions serving North Korea’s political interest. Apart from that, we have seen his sister in a brief flashback scene. She gave him the pigeon necklace she treasured the most and asked him to come back to the North. Such a tragic backstory cannot be of someone who is related to the higher-ups of the North Korean military. Thus, I believe that there’s a lot more to Soo-ho’s identity that’s yet to be revealed. So, keep watching the upcoming episodes and stay tuned in Otakukart for all the latest theories and explanations.

Is Snowdrop based on True Story?

From the amount of detailing done in the storyline, anyone unaware of history may consider it as a true story. But no, it isn’t. JTBC admits that the story holds no historical significance and is far away from reality. According to the Seoul Court’s statement, the historical distortions made in the story have a very low probability of people accepting it blindly. It’s no secret that the two nations have a long history, but let’s just keep Snowdrop away from it and enjoy it as a show.