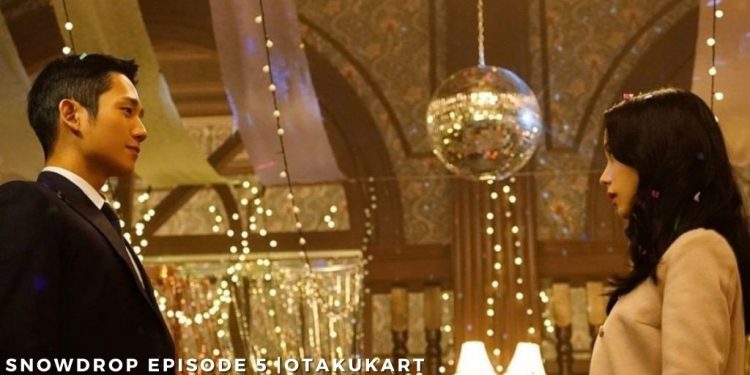 Snowdrop Episode 5 is just a few days away, and fans can’t hold their excitement! Plus, it might come sooner than you think. The audience has been more than impressed with the premiere of Snowdrop.  From the acting to the sets and music, everything was amazingly perfect. The kdrama had been gaining a lot of attention since last year, undoubtedly due to its star-studded cast. It has skilled and veteran actors and actresses like Jung Hae In, Kim Hye Yoon, Yoon Se Ah, Yoo In Na, Jung Seung Jo, and Jung Yoo Jin. Plus, the icing on the cake is that this is the first kdrama where Blackpink’s Jisoo has the main role. However, the story of the kdrama has proved that the series isn’t just famous because of its cast. Surprisingly, the story of Snowdrop took 12 years into making.

Yoo Hyun Min had talked about how she kept perfecting and perfecting the kdrama, which is the reason for the taking this long to write the story, Talking about Yoo Hyun Mi, the writer is famously known for writing the script of the OG kdrama Sky Castle. Not only she but Jo Hyun Taek, the director too, is known for working in SKY Castle. Undoubtedly, these two would have made sure to come up with a fool-proof k-series. Don’t miss out on the magnificent kdrama and check out the release date, streaming details, and predictions for Snowdrop Episode 5.

Snowdrop Episode 5 will be released on 26 December, this Sunday. Furthermore, this episode of Snowdrop is released earlier than scheduled. Due to the mountain of controversies that Snowdrop got surrounded by, the creative team and the broadcasting network decided to air three episodes of  Snowdrop in advance. Fans are beyond grateful for this early access. Controversies aside, no one can deny that Snowdrop has kept the mystery and thrill alive every single second. Be it the politicians of South Korea and North Korea discussing a dangerous deal or Eun Young Ro sneaking Im Soo Ho from one room to another, your heart will never stop racing. Moreover, with the national security agents keeping an eye on every corner of the dorm house, Im Soo Ho’s escape is next to impossible. Will he be able to get out unharmed? Find out in Snowdrop Episode 5!

Where to Watch Snowdrop Episode 5?

This Jisoo and Jung Hae In starrer kdrama is Disney+’s first exclusive kdrama release. Furthermore, the original broadcasting network for this drama is JTBC.  The channel is known for its high-class production of kdramas with outstanding storylines such as SKY Castle, The World Of The Married, Just Between Lovers, Something In The Rain, Strong Woman Do Bong Soon, and so many more. Snowdrop has taken up the 11:30 pm according to Korean Standard Time on JTBC. The timings for International viewers are, 8:30 am in the United States, 8:30 am in Canada, 12:30 am in Australia, 7:00 pm in India, and 1:00 pm in the United Kingdom.

For viewers who reside outside of South Korea, this kdrama is available on Disney+ with subtitles in various languages. However, only Disney+ users in countries like Malaysia, Indonesia, Thailand, Hong Kong, Singapore, Australia, New Zealand, and of course, South Korea have access to the drama. Snowdrop Episode 5 is revealed to have a plot twist that will change the course of the storyline. So do not miss out on this amazing episode.

The upcoming episodes of Snowdrop will consist of Eun Young Ro’s and Im Soo Ho’s blooming romance, the chase for Taedong River, and rising political tensions. Each character of Snowdrop has so many layers that you will never be able to predict what they are about to do next. Let’s take Pi Seung Hee as an example. She is cold-hearted and makes sure that everyone abides by the rules. Even if that means having a gun pointed at her head, we got to see a flashback where she was left tied at a bridge, just about to fall to her death.

Fans are dying to know what happened and how she ended up here. The same goes for Im Soo Ho, who talks about his sister and her little child with the biggest smile on his face. What are their intentions? What is their past? Find out your answer in Snowdrop Episode 5.