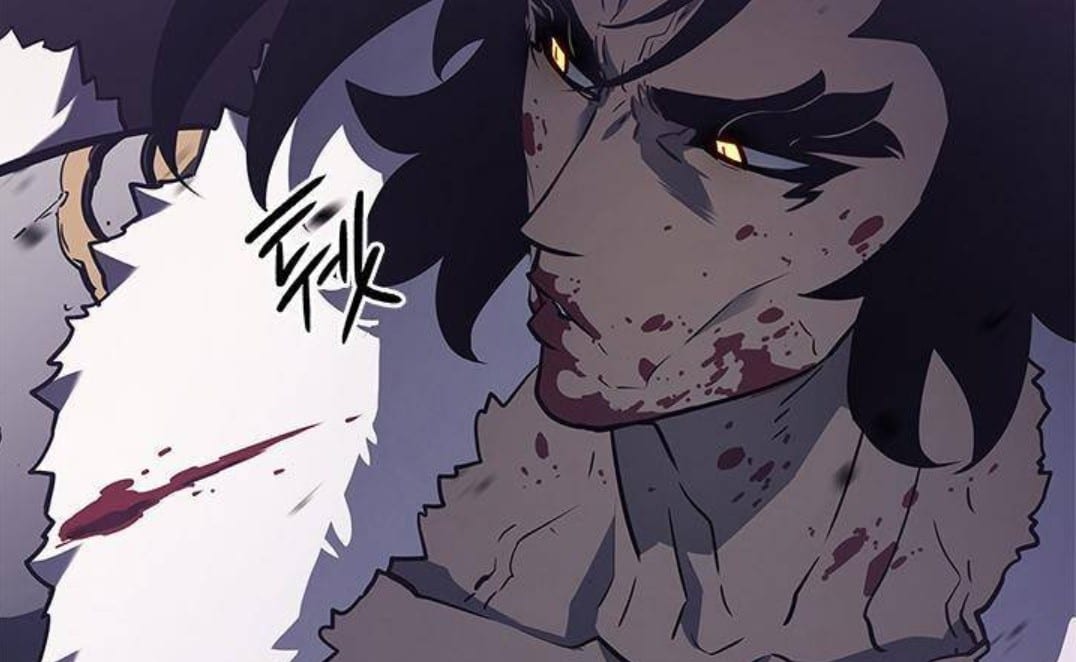 Solo Leveling Season 2 has returned after two weeks; the manga will continue to release new chapters as usual. Let’s find more about the Hunters and Sung Jinwoo’s plans since the Gate is about to open. The chapter starts with the appearance of the ”Gate” in Korea above the skies. Meanwhile, in Korea Hunter Association, a strange B-Rank Hunter is wondering about a Monster Gate that will open at any moment. The guy realizes that he can’t let his guard down as a B-Rank Hunter.

On his way, the B-Rank Hunter felt the presence of a dangerous Hunter and ask who is near him. Other Hunters wonder if there is a brawl and notice that the Hunter is too big for Ma Dong-Uk. They realize that ”Ma Dong-Uk is a reference to Korean actor Ma Dong-Soek, known as a big guy.” The Hunters talked about the Hunters remaining in Seoul and wonders if that guy is crazy to challenge a dangerous Hunter bigger than him. One of the Hunters wonders if they should call an ambulance for that guy since he is inviting death to himself.

Ma Dong-Uk started to kill the Hunters around the building and wonders if this guy is insane. He began to destroy everything and the cars outside the building and the parking lot. The building gets smashed as he pulverizes the weakling Hunters around his area, showing his overwhelming powers. Ma Dong-Uk yells at the humans, calling them mere humans, and that he is her to Hunt them instead of monsters. The beast comments that he will use his teeth and Nils to cut the humans’ soft skin and flesh.

Ma Dong-Uk reveals that he is the King of Beast, aka The Beast Monarch, and if they dare, they can try to stop him. He begins to burn everything around him using the powers of flame. Meanwhile, another Hunter who refused to fight with Sung Jinwoo during the meeting of Monarchs is wondering about something. Sung Jinwoo and Hae-in are near the river, and she is shy while drinking water as he approaches here. He told Hae that he know a restaurant that serves a good breakfast and they can go there.

Sung Jinwoo also told her that they would enjoy a good meal and take a good bath. She looks back after finishing drinking water and replies yes. The ”ride” Beru appears again to give them a ride heading to the hotel Sung Jinwoo told Hae and said they can now go. Hae wonders why Sung Jinwoo has to summon Beru since he says the hotel is around here. Sung Jinwoo replies that he can reach the place in five minutes if he dashes at full speed. Hae-in is impressed, wondering how many kilometers can Sung Jinwoo run in five minutes.

Meanwhile, Chief finds that there is someone who infiltrated Hunters Association, causing chaos. Chief Woo Jin-Chul has recently become the Chairman after Chairman  Gun Go-Hee died during the battle with the Monarch of the Frost. Woo Jin-Chul asks the Hunters if there any corpses, and the Hunter replies that they have not confirmed everything for now. Woo Jin-Chul realizes that only a few hours left for the Dungeon Break to begin. Chairman is worried about the Gate and Monsters that will show up.

The chairman wonders about Hunter Sung Jinwoo, and the guy replies that they can’t connect with Sung Jinwoo. Woo Jin-Chul decided that if the situation gets worse, he will step up and fight. Fortunately, one of the Hunters arrives and reveals that a Hunter who can stand a chance against the Monster has appeared. Woo Ji-Chul ask if Sung Jinwoo has arisen, and that guy said the Hunter that has appeared said he happened to be around the area. The battle between the mysterious Hunter and the Monster arrived and told the Monster that he is fated to take him down.

Thomas arrived and said that the beast is his meal and pushed his assistant away. The braw between Thomas and the beast begins as Sung Jinwoo and Hae had a nice dinner at a five-star hotel. Sung Jinwoo realizes a monster is rampaging around Seol and wonders who is fighting with that Monster during the date. Woo Jin-Chul reports everything to Sung Jinwoo. The citizens said that Thomas, aka the Goliath, has arrived. Thomas told the lower Hunters to rescues the citizens as he begins to exchange blows with the Monster.

What To Expect From Voice 4 Episode 5?

Filhaal 2 – Mohabbat: What To Expect From The Music Video?