After a lot of thinking So Ri's grandparents agrees to let her get married to Ha Ru but now that Ok Hee knows about Gwang Nam's affair she is not sure if So Ri and Ha Ru's relationship could continue. 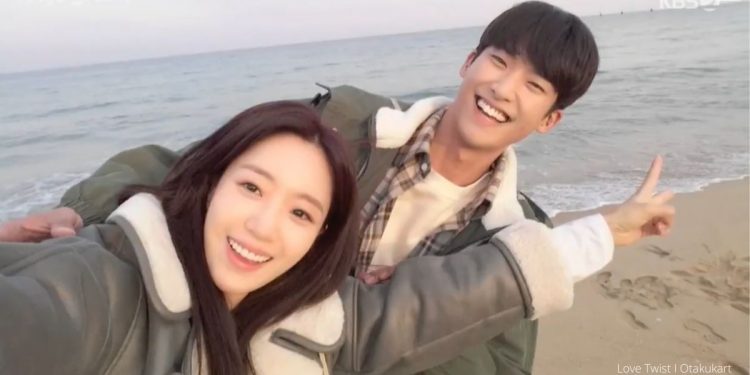 Finally, after finding out about Gwang Nam’s affair, Ok Hee confronts both Gwang Nam and Hee Ok. Even then, both of them shamelessly say that they will keep seeing each other. This also raises a big question about So Ri and Ha Ru’s future. As their parents are having an affair, So Ri and Ha Ru being in a relationship seems like a big controversy. In ‘Love Twist’ episode 16, Ok Hee has given Gwang Nam an ultimatum to end things with Hee Ok.

Now that Ok Hee is not in favor of So Ri and Ha Ru’s relationship, her in-laws have agreed to let them get married. Gwang Nam tells So Ri to stop seeing Ha Ru, and this makes her really angry. She even considers fighting with her father over this topic. What will happen when she finds out that her father is having an affair with Ha Ru’s mom.

Till now, we have seen that Ok Hee finds out about Gwang Nam and Hee Ok’s affair, so to ease her pain, she drinks all night. Also, Kyung Joon wants to split So Ri and Ha Ru, but he won’t be able to execute this on his. He convinces his parents that So Ri and Ha Ru should not be dating each other, and they help him by splitting them. The next day, So Ri’s grandmother thinks that Ok Hee and Gwang Nam are fighting because of which she did not come back home last night. They don’t know about the affair and think the fight is about So Ri’s marriage.

The next day when Ok Hee comes home, she finds out that Gwang Nam stayed with Hee Ok last night. She tries to sleep it off, but Mi Ja wakes her up. Ok Hee has always been kind and giving towards her, but now that she knows that Mi Ja has been keeping her husband’s affair a secret, she has become intolerant to her. Later, Ok Hee goes to Hee Ok’s house and gives her a diary. In the diary, Ok Hee has written all of her emotions and finds a list of everything she has ever received from Hee Ok. After paying her for everything, she ends her relationship with Hee Ok.

Seeing how Ok Hee is acting, Hee Ok figures out that she knows about the affair. She has no regret on her face but still apologizes shamelessly. However, Hee Ok defends her actions, saying it is fate that Gwang Nam chose her over his own wife. Ok Hee offers her money to leave her husband, but she refuses to take anything from her. While So Ri and Ha Ru are enjoying their vacation, Ok Hee is preparing to confront Gwang Nam.

Ok Hee makes Gwang Nam drink a lot because he is honest only when he is drunk. Then she asks him why did he marry her? She asks this question because Hee Ok tells her that Gwang Nam confessed that he married Ok Hee just because he felt sorry for her. Also, as they keep talking, Gwang Nam realizes that Ok Hee has seen him with Hee Ok outside the apartment. She tells him to stop playing a deity and end it with her.

The ‘Love Twist’ Episode 16 will be released on 3rd January 2021. When Gwaang Nam hears that Hee Ok wants to share him with Ok Hee, he takes this suggestion in a positive manner and agrees to it. This makes Ok Hee even madder, and she pours the bowl of sauce on his head and directs him to end everything with Hee Ok. Will this finally bring an end to Gwang Nam’s affair?

Where To Watch ‘Love Twist’ Episode 16?

The South Korean drama ‘Love Twist’ is a television series broadcast by the official network KBS2. People living in South Korea can watch the upcoming episodes from Monday To Friday on the given network. As for international fans, they can watch the ‘Love Twist’ episode 16 on the subscription-based website Rakuten Viki.