So Ri Is Attacked By Her Childhood Nemesis Mr. Kim In ‘Love Twist’ Episode 9 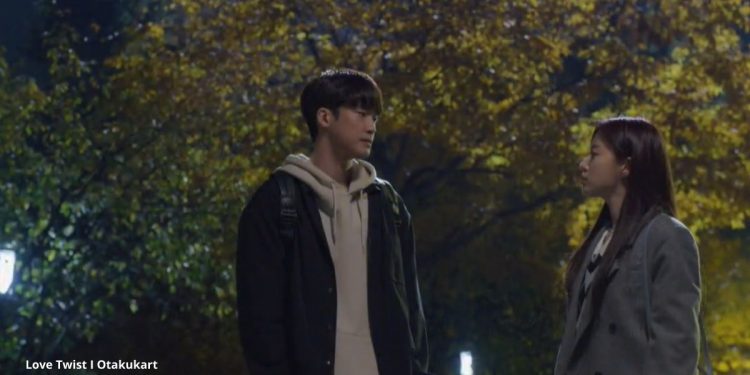 After the welcome party for Hee Ok, everyone feels a little odd as Ma Ji is acting strange. When she returned home, she tells her husband all about Hee Ok and Gwang Nam having an affair. When Ma Ji tries to confront Hee Ok she throws a glass of coffee at her, and they have a physical fight in the middle of the cafe. In ‘Love Twist’ episode 9, Gwang Nam will be in big trouble as Ok Hee reads his messages.

There is a long-term enemy of So Ri’s family who keeps a snake wine on their doorstep once every year. The name of the man is Mr. Kim, who killed So Ri’s cat when she was a child. At that time, So Ri fearlessly threatens him and vows to take her revenge. Remembering this, everyone in her family other than her mother thinks that she is the one who damaged his face. Let’s find out the full story.

Till now, we have seen that Ha Ru gets a job offer from Goodle in Silicon Valley and decides to shut down ‘Twist’. His decision is the result of So Ri’s father saying that she will work in his company. Also, he mentions that soon she will be married to someone. Yoon Ah being a well-wisher of Ha Ru calls his mother and asks her to convince him to be firm on his decision.

When Ha Ru finds out Yoon Ah called his mother, he becomes angry at her. He doesn’t want her to get involved with his matters. While talking to Yoon Ah he gets a call from So Ri and leaves to meet her. So Ri realizes that she is holding Ha Ru back and have forced him to walk with her. When he arrives at the cafe, she agrees to shut down ‘Twist’. Later, Hee Ok could not let go of the matter and called Ok Hee to meet. She tells her that So Ri and Ha Ru have started a business together. As So Ri will start her training to take over her father’s company soon, Hee Ok believes that Ha Ru should think of his future.

Little So Ri Hurt Mr. Kim In The Past

Everyone in So Ri’s family is suspicious of what happened to Mr. Kim. In the past, So Ri has a cat named Blackie. One day the cat disappears, and she is not able to find it anywhere. Later, she is seen accusing Mr. Kim of killing her Blackie. The conversation escalates, and So Ri threatens to kill Mr. Kim. Then her father interferes, but he witnesses the look in his daughter’s eyes as she says that she will take her revenge. That day Gwang Nam realises So Ri’s potential and acknowledges her as a successor.

Mr. Kim tracks down So Ri and confronts her for damaging his face. Even though she keeps saying that she is not the one who did this, he won’t let go of her. As the situation starts to get out of hands, Ha Ru intervenes. As they are leaving the scene, Mr. Kim destroys the cats’ house that So Ri built. Seeing this, she is aggravated and knocks him to the ground. In a flashback, we find out that it was a snake in the wine bottle that scratched Mr. Kim’s face. Will the fire in So Ri help her become a great successor?

The Korean drama ‘Love Twist’ release date is 23rd December 2021. In the upcoming episode, Ok Hee reads Hee Ok’s message on Gwang Nam’s phone. The message says, ‘I’m all fired up, when are you coming. The next day, Ok Hee visits Hee Ok at her hotel, but she acts very suspiciously. Will Gwang Nam finally get caught?

Where To Watch ‘Love Twist’ Episode 9?

‘Love Twist’ is a television series broadcast by the KBS2 network. It is a daily show, so people living in South Korea can watch new episodes from Monday to Friday. As for international fans, ‘Love Twist’ episode 9 is available on the subscription website Rakuten Viki.