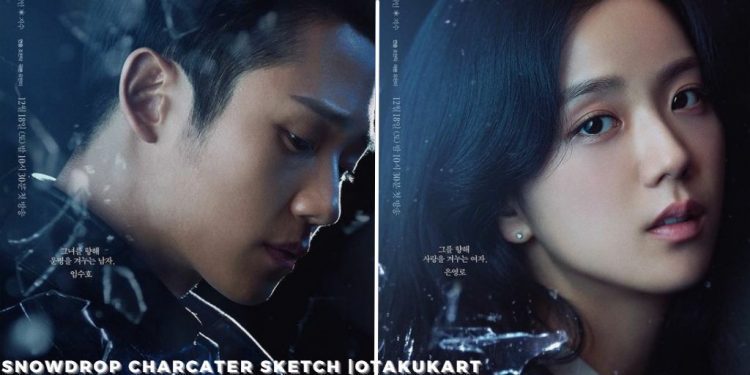 Fans have finally gotten to know more about the characters of Snowdrop. Recently, JTBC had given fans a sneak peek into the first script reading of the kdrama. You’ll be surprised by the number of talented people that have worked in this k-series. Not only does the kdrama have one of the members of Blackpink, but also has many critically acclaimed actors and actresses. The upcoming k-series stars Jisoo, Jung Hae In, Kim Hye Yoon, Yoo In Na, Yoon Seh Ah, Jang Seung Jo, and Jang Han Na. These people have bagged countless awards and amazing roles under their wing. To make things more exciting, a part of the cast had also previously worked in SKY Castle. For those who don’t know, SKY Castle is one of the nest kdramas out there. It is the perfect cup of tea for those who love watching mystery kdramas.

Yoon Se Ah, Kim Hye Yoon, the director Jo Hyun Taek and the screenwriter Yoo Hyun Mi had showcased their talents in SKY Castle. Furthermore, fans have been bedazzled by Jung Hae In and Jisoo’s on-screen and off-screen chemistry. Even through clips and posters from the kdrama, the viewers got butterflies with each little interaction of Jung Hae In and Jisoo’s character. Furthermore, as the kdrama has such a beloved cast, people wanted to know more about the characters they would be playing in the kdrama. And finally, the cast of Snowdrop had introduced their characters to the audience. Come and check out the interesting characters of Snowdrop!

The Cast Of Snowdrop Talks About Their Characters

The first-ever script reading had started with some words from the director and screenwriter of the kdrama. Jo Hyun Taek, the director, first spoke about how he will do his best with the k-series. He also hoped that the cast members would be able to rely on him whenever they are troubled by something. Next up, the screenwriter, Yoo Hyun Mi, talked about how she started working on the story of Snowdrop 12 years ago. It seems that know she has perfected everything is confident about the story. One more point to keep in mind is that as Yoo In Na was cast a bit later than the other cast members, she wasn’t present in the first script reading.

Jung Hae In gave the audience a little but not too much information about Im Soo Ho. Im Soo Ho is a Korean German who is a graduate student of an elite university in Korea. While reading through the script, Jung Hae In revealed that his character will be having a younger sister. Through the lines, fans git the idea that his sister thinks a lot about him and knows that Im Soo Ho will be up to something.

But what is he up to? Fans have been curious about what Im Soo Ho is hiding and want to find the answer to why he looks so miserable in the trailers. Jung Hae In has been a part of many outstanding kdrama such as Something In The Rain and One Spring Night. Fans are sure that he’ll be able to nail the role of Im Soo Ho.

Next up, Jisoo gives her fans further insight into her character Young Ro. Young Ro is nicknamed the Ice Breaker of Hosu Women’s University for her fun and cheerful personality. Young Ro is a freshman who is majoring in English Literature. Jisoo revealed that Young Ro would be caught up with a series of events when she meets Jung Hae In. Fans want to know why Young Ro was pointing a gun at Im Soo Ho and what happens to her at the ending of the kdrama. Fans don’t know how to wait anymore!

As this is Jisoo’s first-ever main role, fans have been showing her immense support. They are proud that she will be fulfilling her dream of becoming an actress. Blinks are also happy that she feels relaxed and comfortable with the other cast members. Jisoo had made guest appearances in kdramas like Arthdal Chronicles Part 2: The Sky Turning Inside Out, Rising Land, where she played the role of Song Joong’ki’s girlfriend. Although she has done only guest roles in kdramas and music videos, she has proven her acting through Snowdrop’s trailer. Everything from the emotions to the dialogues was perfect. So fans think that Jisoo will do an outstanding job in the kdrama.

Introducing The Stern Monitors Of The Dorm

Yoon Se Ah will remind you of those strict teachers as Pi Seung Hee. By reading just a few lines from the script, Yo Se Ah showed that Pi Seung Hee is a person who rules with an iron fist. If you do anything out of line, the housemistress of Hosu’s women’s university will give you a grave punishment. If we weren’t already terrified by Pi Seung Hee, Yoon Se Ah even told the audience that her character goes by the name ‘Blood ocean’. Now there is no wonder why she was a great threat to Young Ro and Im Soo Hoo when Young Ro was nursing Soo Hoo.

Kim Hye Yoon will be playing the role of the mean telephone operator of Hosu Woman’s University Dorm Gye Bun-ok. It seems as if Kim Hye Yoon’s character, along with being mean she will also be full of sass. Gye Bun-ok had to stop her education due to her family’s financial crisis, but she still has a yearning to continue her education. Also, just like many of the characters present here, Gye Bun-ok also gets caught up in some events. Whenever the cast members say that the characters talk about ‘the event,’ fans get even more curious about what had happened to all of them.

Meet The Members Of The Korean CIA Investigation

Jung Seung Jo will be playing the role of the stubborn, single-minded leader Kang Moo. Kang moo had been kicked out of his organization just as he is going to complete a tough mission. He even amazed the audience with his acting skills when he acted out some of the lines from the script. They even unveiled that Kang moo was the leader of the Korean CIA and had been working on an Anti-communist investigation.

Jung Yoo Jin showed the viewers her charismatic side as Jang Han Na. Jang Han Na is also a part of Department 1 of the Korean CIA on Antti-Communist Investigation. Jung Yoo Jin revealed that her character is very hot-headed and even rehearsed some lines. She is a person of action and always makes decisions based on her emotions. Fans can’t wait to see Jung Han Nah in action!

Other Fun Characters Of The Kdrama Snowdrop

Snowdrop has a full range of characters that will make sure that you get hooked to the story. It has the Secretary-General of the Aemin Party Nam Taeil, Cho Sung-shim, the fashionable wife of Nam Taeil, and Eun Chang-Soo’s ( Young Ro’s father) wife, Hong Ae-ra. The cast members had cracked up when they heard a conversation between Cho Sung-shim and Hong Ae-ra. The clip had also introduced the audience to Young Ro and Im Soo Hoo’s friends and relatives. Go Hye-ryeong ( Jung Shin-Hye), Yeon Seol-hee ( Choi Hee-jin), and Yeo Jung-min (Kim Misu) are the trustworthy friends of Young Ro.

Further, Oh Gwang-tae ( Heo Nam-jun), a friend of Soo Hoo, and Ju Gyuk-Chan (Kim Min-Gyu) Soo Hoo’s relative are really dependable. They are characters that are there for him whenever he needs their help throughout the story of Snowdrop. The audience couldn’t stop smiling when the talented cast interacted with each other. It was simply plain that the cast was very comfortable and relaxed around each other. And now that the audience has found out more about the characters, their curiosity has grown. What will be the outcome of this incredible team working together? Don’t forget to find your answer and watch Snowdrop. Snowdrop will premiere its first episode on December 18 at 11:30 PM KST on JTBC. To make things better, Snowdrop will be exclusively airing its episodes on Disney Hotstar+.