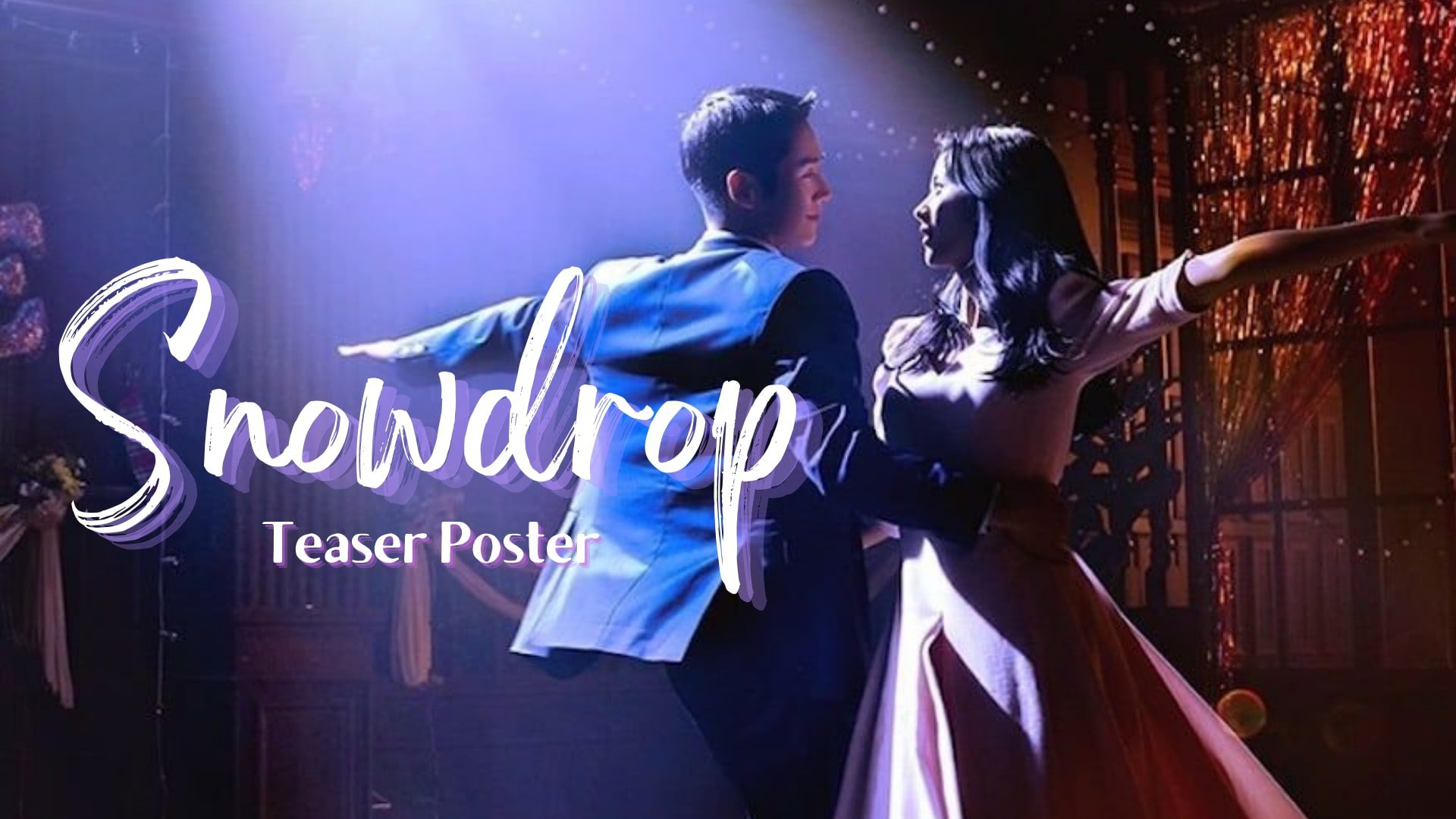 Finally, JTBC has dropped a romantic teaser poster of upcoming kdrama ‘Snowdrop’ starring Jung Hae In and BLACKPINK’s Jisoo. Many fans waiting for this kdrama since the first new dropped. It will be a huge acting debut for BLACKPINK’s Kim Jisoo. Snowdrop is a tragic love tale based on the true story of a man who escaped the political prison camp in North Korea. Due to the plotline, the drama was the center of numerous rumors. However, it is going to be worth seeing Jung Hae In and Jisoo in one frame. Whether it will be a happy ending or a heart-wrenching sad ending, only time will tell.

The kdrama Snowdrop is the second collaboration workpiece between writer Yoo Hyun Mi and director Jo Hyun Tak. Previously, the two worked on super-hit kdrama SKY Castle, leading fans to have high expectations from Snowdrop. Besides the main leads, the supporting cast members are also finalized, includes veteran stars such as Yoo In Na, Yoon Se Ah, Jung Yoo Jin, etc. Kim Hye Yoon and Jang Seung Jo will also join Snowdrop cast. Overall, with such an excellent cast and most awaited love story against political backdrop making fans thriller in anticipation. With the release of Snowdrop kdrama poster, we are coming closer to D-day, when it will finally be released on the scene!

Finally, the waiting period has come near its end! JTBS has dropped a new teaser poster of the upcoming Snowdrop kdrama. It is the first teaser poster starring Jung Hae In and BLACKPINK’s Jisoo. Many fans are waiting for this heartbreaking love story to be broadcasted on the screen. Even though it will be a tragic love tale, it seems worth watching just by looking at Snowdrop kdrama poster! Take a look at this dazzling couple of Snowdrop dancing under shining light, turning the whole ambiance into a beautiful purple melody. 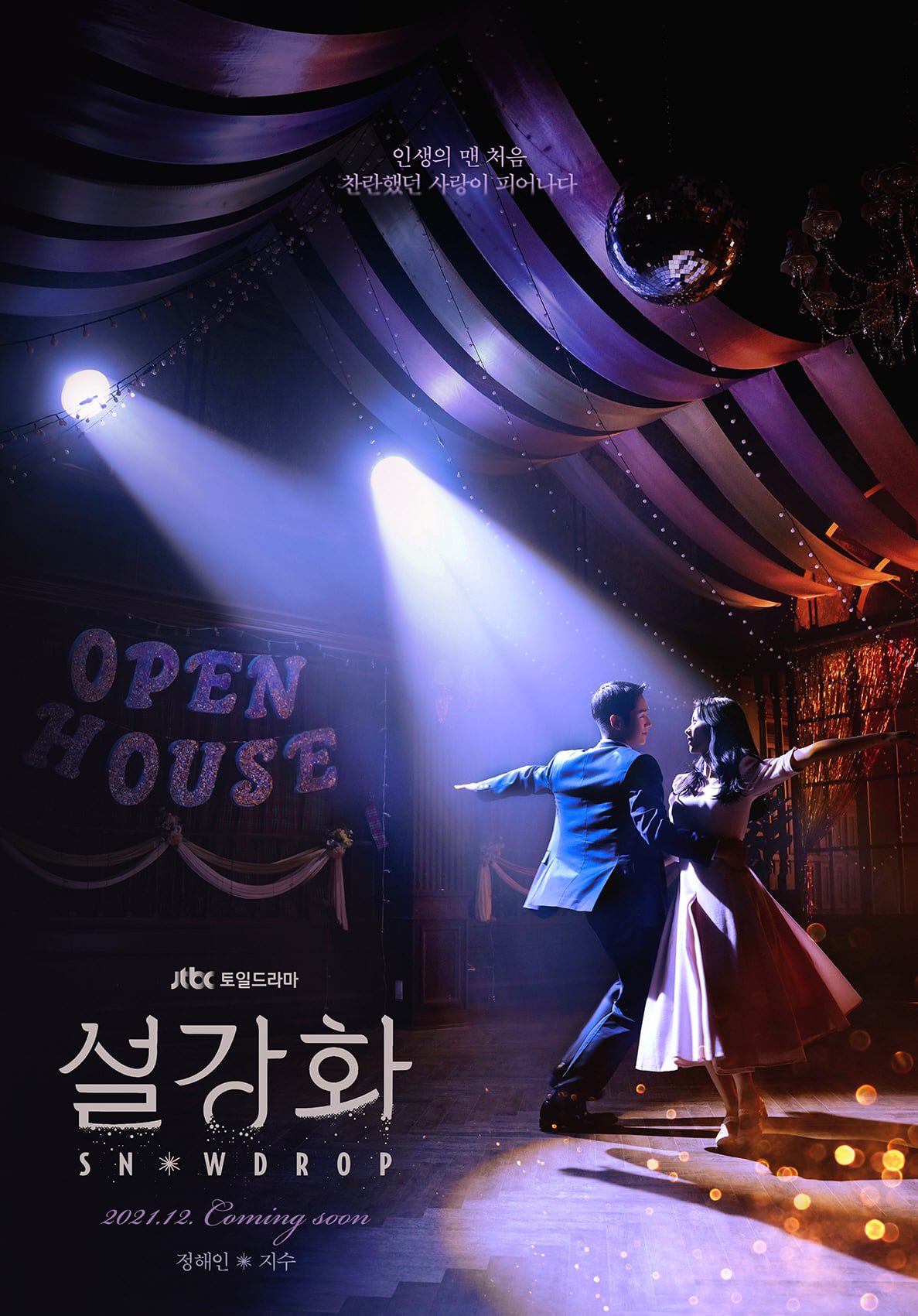 As you can see, the leads in the teaser poster are Jung Hae In and BLACKPINK’s Jisoo. The two are dressed in gorgeous formal attires. Whereas Jung Hae In wore a formal suit, Jisoo is charming in a simple yet elegant baby pink princess dress. Both are dancing on a romantic stage of the ‘Open House’ party under the dazzling spotlight. ‘Life’s first brilliant love blooms’ is mentioned on the top of the teaser poster. It perfectly matches with the beautiful storyline of the upcoming kdrama Snowdrop. Snowdrop teaser poster gives a luminous feeling of the 2016 hit musical romance La La Land.

After the long waiting period, it is announced that Snowdrop kdrama is scheduled to be released in December 2021 on the JTBC channel. It will take over the Saturday-Sunday time slot. Still a month to go. However, there is no official statement has been made about the premiered day. Therefore, fans may have to wait for a while before we get news of Snowdrop kdrama episode 1 release date. Netflix has not announced whether it will take Snowdrop or not. Maybe once the release date is announced, we will know where to watch Snowdrop kdrama.

Even before it got on the screen, Snowdrop was surrounded by numerous controversies regarding its storyline. However, worry not, thankfully the situation is subsided now. All in all, few more days and we will surely receive news of the Snowdrop kdrama release date.

Snowdrop kdrama is a heartbreaking love tale of two students falling in love after overcoming various obstacles together. From the title itself, we get the vibe it will be a tear-jerker kdrama for sure! The storyline is based on the memoirs of a man who fled from the political prison camp of North Korea. It is set in Seoul in 1987, narrating a love story of a prestigious university student Im Soo Ho who, after participating in a pro-democracy protest, is found covered in blood by Eun Young Ro.

Young Ro is also a university student. She hides him from the government in her women’s university dorm room. However, Young Ro is not what she appears to be. The couple finds newfound feelings for each other even amid scrutiny and crisis. Fans are exciting to watch how the two withstand against the backdrop of the political outbreak. Snowdrop official trailer is not out yet. Only Snowdrop teaser poster is dropped. Take a look at this video that gives a glimpse of what is in the store in Snowdrop kdrama.