He has been burying his feelings for her for too long! 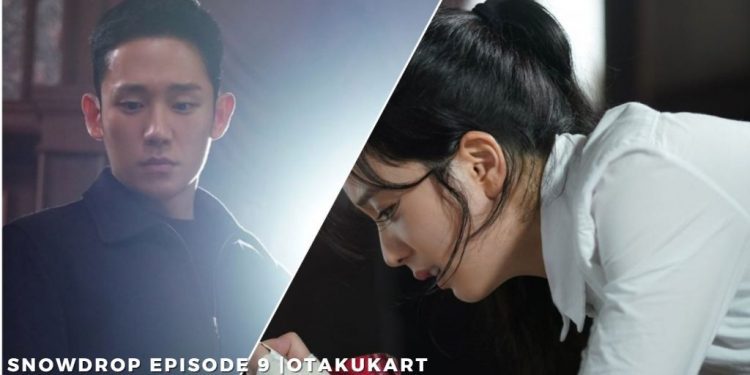 Fans are more than excited to watch Episode 9 of Snowdrop! The past episodes of Snowdrop were full of ups and downs. From Soo Ho carefully taking care of the paper airplane to Young Ro pointing a gun at him, fans could not have even a moment of peace. The highlight of the episode, however, was definitely Kang Cheong Ya’s identity reveal. From the very first episode of Snowdrop itself, fans knew that Kang Cheong Ya being played by the multi-talented Yoo In Na has a bigger role to play than just being Nam Tae Il’s mistress. But boy, did no one guess that she would be the infamous Moran Hill 1, hero of the Republic.

After this big reveal, fans know for sure that the writer of Snowdrop has a lot of tricks up her sleeve. Moreover, it seems that Kang Cheong Ya was not the only one who was hiding deeper intentions than they put on; Pi Seung Hee, the head lady of the dorm, is also in contact with the government officials. Fans believe that her fearlessly standing up to the ANSP officers when they broke into the dorm the first time around was a foreshadowing that she is connected to the higher authorities. With every single call that happens between the leaders of the North and South, the situation inside the dorm as well as the ANSP control room keeps getting more intense. Snowdrop Episode 9 will surely be one hell of a ride!

What to Expect From Snowdrop Episode 9?

Within the release of a few episodes, fans got to see the death of a loved character. After the death of their biological mother, Eun Young Ro and Eun Young Woo, had only each other to rely on. Moreover, Eun Young Ro cared for her brother more than anything in the world. His death will surely leave her helpless. Like the death of her brother was not enough, she also has to deal with the fact that the person she risked her life for is using her as a human shield. The preview of Snowdrop Episode 9 comes as medicine for fans who were dying to see some romance between Lim Soo Ho and Eun Young Ro.

However, just like Soo Ho’s warm embrace, the moment of love between the two won’t last long as Kang Cheong Ya starts suspecting the two. Furthermore, she warns Lim Soo Ho not to let his personal feelings get into the way of their mission. But if Soo Ho did end up at the dorm because of Eun Youg Ro’s paper airplanes, it is already too late for that. With the South and North not being able to reach an agreement, the lives of seventy innocent students along with the spies are currently hanging off a cliff. Will Lim Ji Rok be able to bring his son back? Will the spies have to blow themselves up as the final resort? Fans can also expect Lim Soo Ho and Kang Moo to join hands and figure out they are just being used as pawns by the higher-ups.

Where To Watch Snowdrop?

The Kim Jisoo and Jun Hae In starrer kdrama, Snowdrop premiered on jTBC on the 18th of December. Additionally, Snowdrop takes up the 10:30 pm KST time slot on jTBC every Saturday and Sunday. For viewers outside of South Korea, the timings are 7:00 pm in India, 8:30 pm in the United States, 8:30 am in Canada, 1:30 pm in the United Kingdom, and 12:30 am in Australia. For audiences who want to stream Snowdrop online, Disney+ releases the latest episodes with subtitles in various languages. However, this service is only available in Malaysia, Indonesia, Thailand, Singapore, New Zealand, Australia, Hong Hong, and South Korea. If you want to find out what destiny has in store for Lim Soo Ho and Eun Young Ro, make sure to watch Snowdrop Episode 9.