Are they really going to join hands to stop the higher ups? 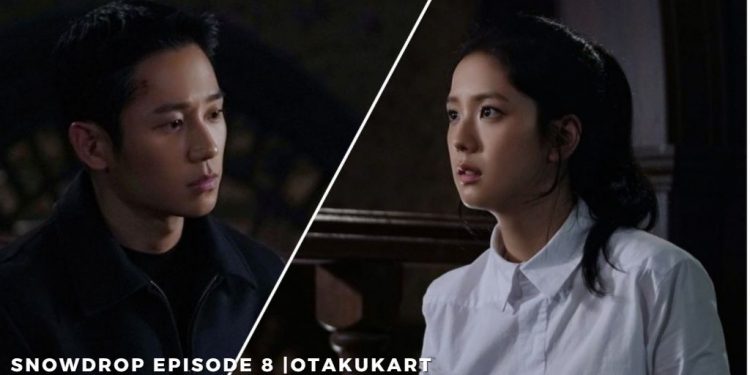 Snowdrop Episode 8 is just a few days away! The audience had been sitting on the edge of their seats throughout the past two episodes! Once a disciplined dorm that Pi Seung Hee used to rule is now a hostage home to more than seventy victims under the control of the most dangerous North Korean spies. Snowdrop Episode 8 is speculated to have one of the most hyped scenes that fans witnessed in trailers before the premiere of  Snowdrop. The innocent Eun Young Ro risked her future just to help Im Soo Ho when he was injured. She revealed the fact that she was the daughter of the most powerful man in ANSP despite knowing the danger and even risked her life just so that she could give a mere first aid treatment to Kang Moo.

What must have happened for the selfless Eun Young Ro to aim a gun at the man that she saved? Find out in Snowdrop Episode 8. Each character in this layered drama harbors a deep secret. From the ever-composed Pi Seung Hee to the hot-tempered Joo Gyeok Chan, they are all hiding something. Keep on reading to find out what the mind-blogging mystery kdrama, Snowdrop, has in store for us.

What To Expect From ‘Snowdrop Episode 8’?

The upcoming episode 8 of Snowdrop consists of a plot twist that none of us saw coming. Sworn enemies Lim Soo Ho aka Taedong River 1 and Lee Kang Moo aka Black Tiger may join hands. After being stuck at the dorm, Lim Soo Ho is beginning to doubt the instructions sent to him by the ruling party in North Korea. His suspicion is heightened even more as the director of ANSP, Eun Chang-Soo, keeps repeatedly telling him to check the instructions. He and his comrade Joo Gyeok Chan are beginning to think that the South is tampering with the instructions.

Meanwhile, the South and the North are desperately trying to save their 300 million dollars deal while also trying their best to protect their loved ones. On one hand, Lim Ji Rok is trying to protect his son, and on the other, Eun Chang-Soo is doing his best to keep his doctor alive. However, now that Choi Soo Ryun is in charge of the deal, will Lim Ji Rok be able to protect his son? Especially after she instructed Eun Chang-Soo to kill all the spies, the chances of survival for the three spies seem as thin as a hair. Make sure to watch Snowdrop Episode 8 to watch the drama unravel.

A week feels like an eternity when the drama is as intense and thrilling as Snowdrop. Especially after the last episode ended with the major reveals that Eun Young Woo, Young Ro’s beloved brother, and the ANSP director’s only had passed away. Snowdrop Episode 8 will be released on 8th January 2022. Furthermore, this kdrama releases a new episode every Saturday and Sunday. Due to being embroiled in numerous controversies, the creators of Snowdrop took the decision of releasing an extra episode to clear up the misunderstands. You can read more about the Snowdrop controversy here. Due to this, episode 8 of Snowdrop is releasing earlier than originally scheduled. And fans could not be more grateful.

Where to Watch Snowdrop Episode 8?

Snowdrop is the first exclusive South Korean release by Disney+. In South Korea, this kdrama is broadcast on the trusted network, JTBC. Furthermore, Snowdrop has taken up the 10:30 pm time slot according to Korean Standard Time. For international viewers, the timings are 7:00 pm in India, 1:30 pm in the United Kingdom, 8:30 pm in the United States, 8:30 am in Canada, and 12:30 am in Australia. For those of you who want to watch the drama with subtitles on Disney+, we are sorry to tell you that this service is not available in all countries. The lucky viewers in countries like Malaysia, Indonesia, Thailand, Hong Kong, Australia, New Zealand, and South Korea can easily watch Snowdrop Episode 8 on Disney Hotstar+ with subtitles in the language of their choice.

Also Read: Who is Soo-ho in Snowdrop K-Drama? Is He Really a North Korean Spy?
Tags: JisooSnowdrop
ShareTweetShareSharePinSend
Previous Post