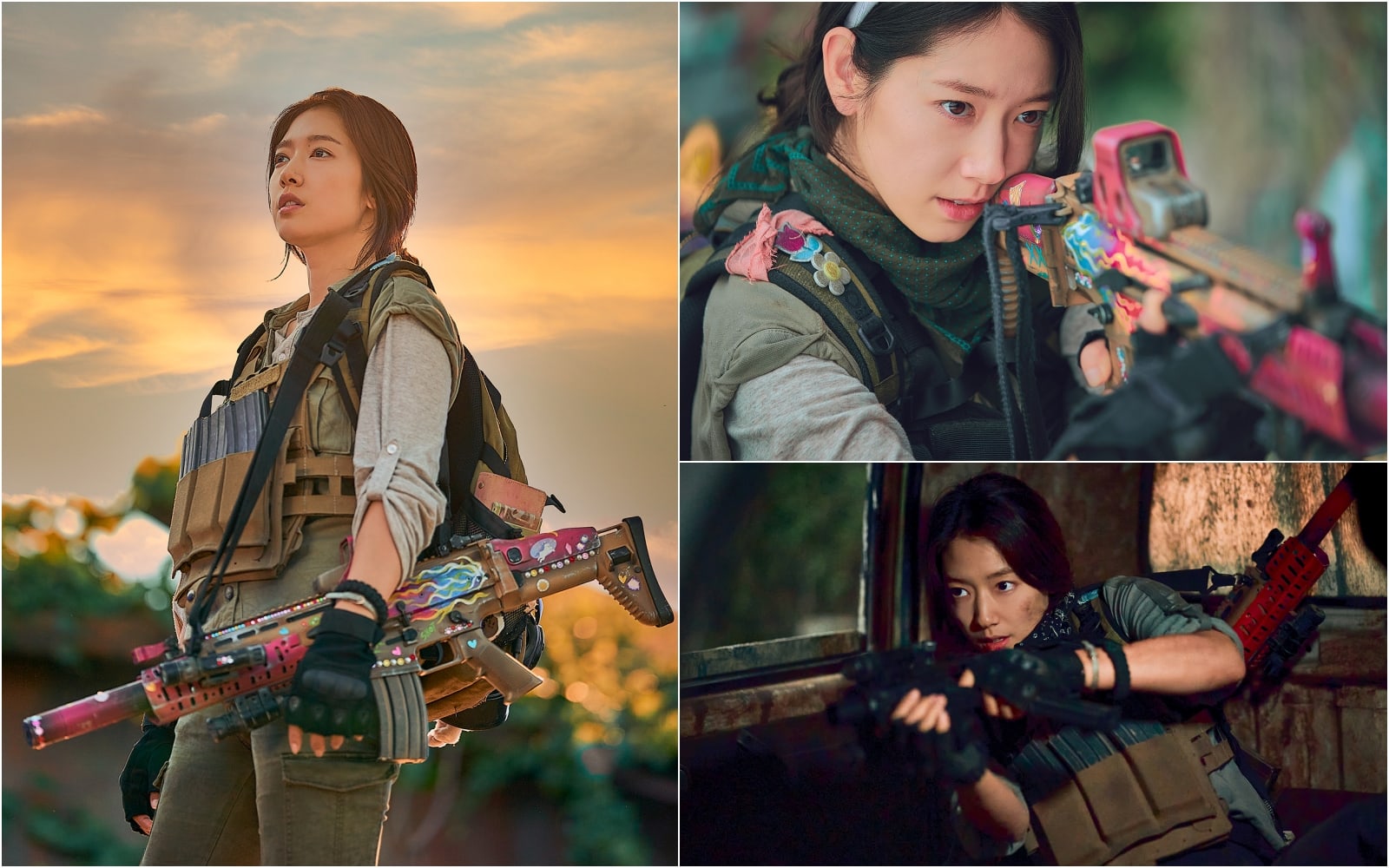 Sisyphus The Myth Episode 10 was released on 18th March 2021. Sisyphus The Myth is an ongoing South Korean drama starring Cho Seung-woo, Park Shin-Hye, and Kim Byong-Chul. The show is internally broadcasted via the global platform Netflix. Apart from that, it airs on the original network JTBC every Wednesday and Thursday at 21:00 KST. It is also popularly known for the 10th-anniversary drama of the network JTBC. It is a high-budget drama and started airing on 17th February 2021. To date, a total of 10 episodes have been released.

The official trailer for the drama was released on 9th February 2021, the drama is ongoing and is nearing its end. In the trailer, we already saw what we could expect from the drama overall. The trailer starts with a description ”Welcome to the future”. The drama involves a time machine, and Cho Seung-woo, along with Park Shin-Hye, is trying to deal with the mess. People from the future try to mess up with Cho Seung-woo since they believe he is going to build the time machine. They try to kill him, and that’s when Park Shin-Hye comes with a helping hand, she is a genuine girl who tries to save the world as a world with a sense of loneliness is not much worth living for. Cho Seung-woo is playing the role of a genius named Han Tae-Sul, and Park Shin-Hye comes forward in the mission of saving the world. The trailer is full of action and drama. We also get to see a glimpse of some amazing fighting scenes, and it makes us wonder what comes next.

A Quick Summary Of The Previous Episodes 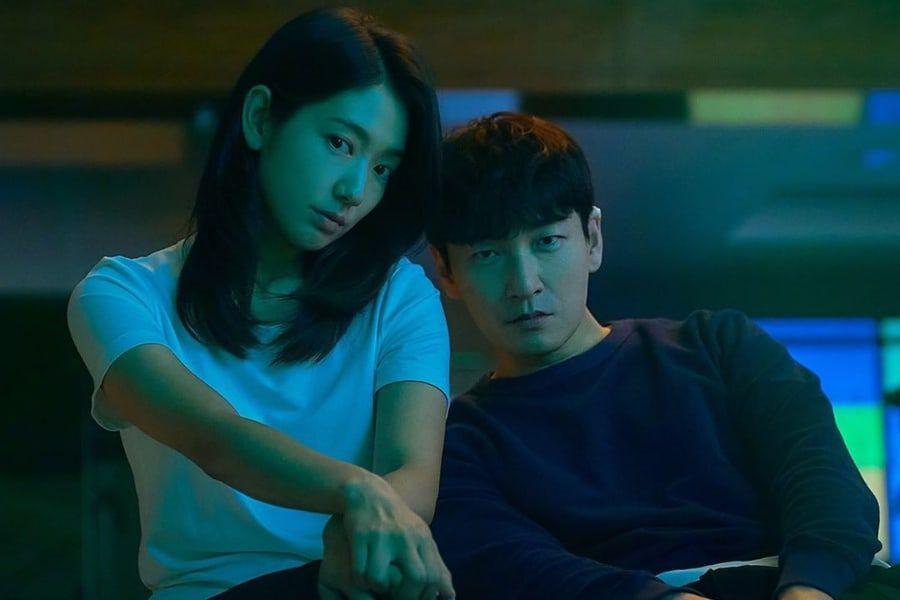 A still from K drama Sisyphus

The 1st episode of the drama Sisyphus: The Myth aired on 17th February 2021, and we see Kang Seo Hae arrives in the year 2020 while Han Tae-Sul is busy inclined towards an important discovery. After bidding a final goodbye to her father and taking his advice, Kang Seo Hae leaves for the destination 2020. Kang Seo Hae was also strictly advised by her father to stay away from Han Tae-Sul, but let’s see what fate has in store for them.

The 2nd episode of the drama Sisyphus: The Myth, aired on 18th February 2021, continues with the same plot revolving around the suitcase, which gives Tae-Sul more and more mysteries to solve. As the control bureau shows its true colors, so Kang Seo Hae has to fight them back and escape. She takes help from a guy named the sun, who helps her in exchange for lottery numbers.

The 3rd episode of the drama Sisyphus: The Myth aired on 24th February 2021. The story continues with a deep sci-fiction mystery, and we see the two lead characters slowly coming together. Han Tae Sul goes for a conference where trouble soon follows him, and him, along with Kang Seo Hae, makes an escape, but soon troubles follow them around. A new character Mr. Park is introduced, who is apparently from the unofficial embassy and looks after people who came here from the other side. 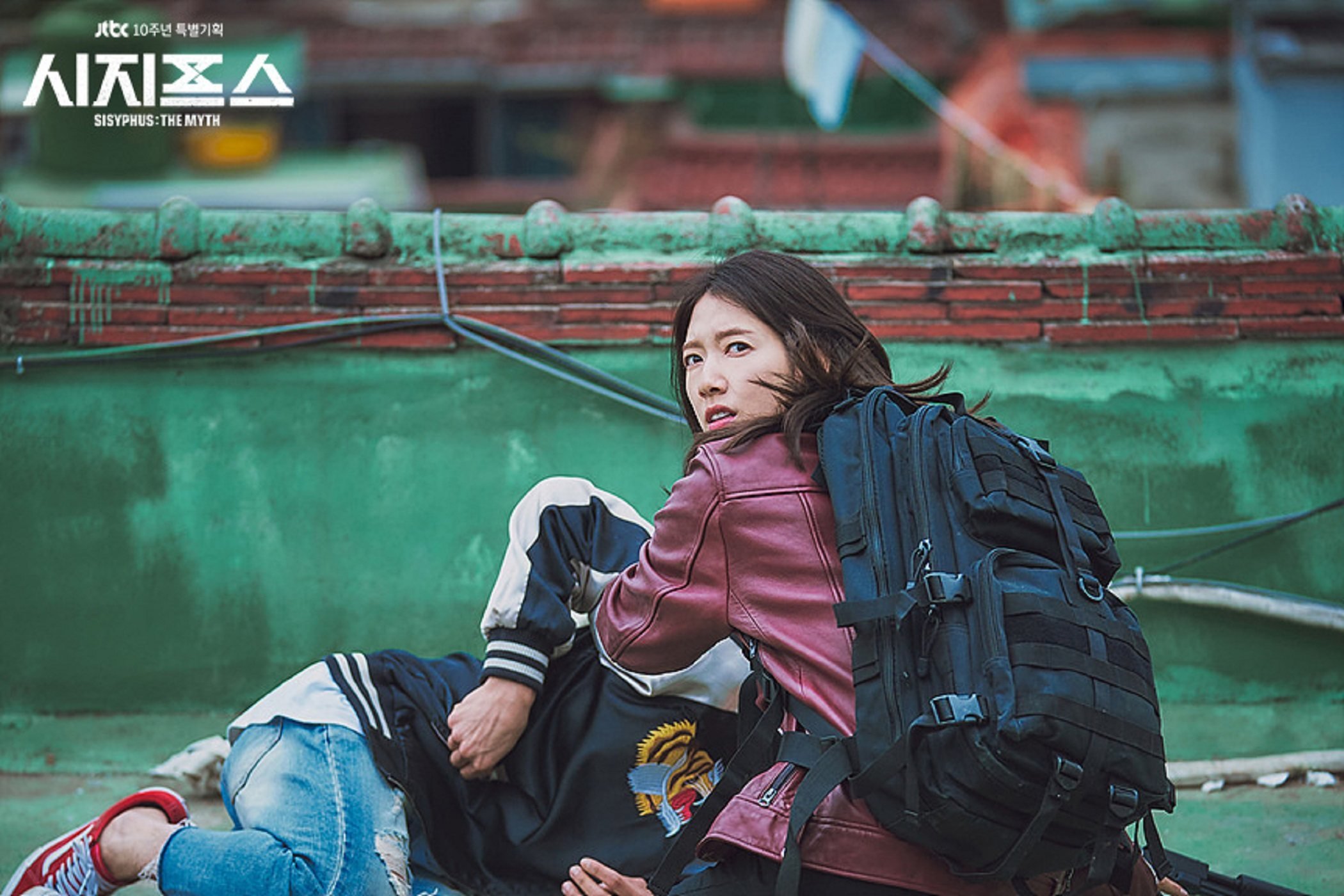 The 4th episode of the drama Sisyphus: The Myth aired on 25th February 2021. The episodes start with the future scenario. Kang Seo Hae and Han Tae Sul run from the enforcement agency and stops at a town that doesn’t have a current civilization. Episode 4 gives us a peek into the future and given in the time travelers request, they both halt at Tae-Sul’s mothers’ house. There is a continuous chase for Tae-Sul and Gang Seo-Hae with plenty of cars behind them, and they finally need to stop at a roadblock. Also, while fleeing, Kang Seo Hae is shot in the shoulder.

The 5th episode of the drama Sisyphus: The Myth aired on 3rd March 2021, and the action thriller doesn’t seem to slow down any day soon with plenty of actions every day to stimulate the audience. While Kang Seo Hae reveals some disturbing details about the future. The story is well written and explains the reasons for Gang Seo-Hae’s protectiveness over Tae-Sul. The plot is unfolding slowly while Kim Seo-jin is caught for trespassing in her own clinic, and Han Tae Sul tries to explain to her what’s going on. 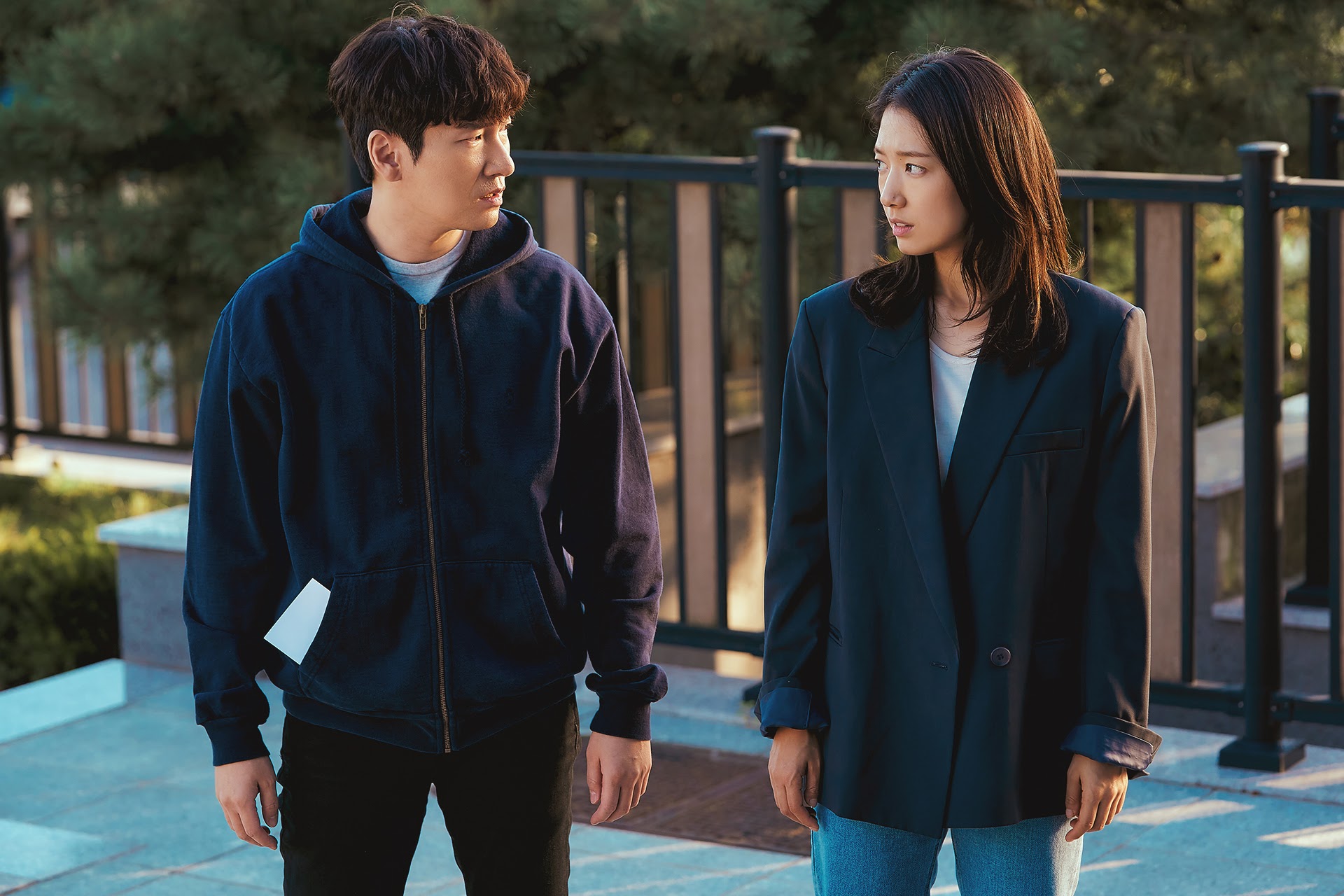 A still from K- Drama Sisyphus: The myth

The 6th episode of the drama Sisyphus: The Myth aired on 4th March 2021. The 6th episode opened in August 2001. We see the control Bureau again attacking Kang Seo Hae, who is fortunately saved by an anonymous ally. Meanwhile, Han Tae Sul figures out he has been backstabbed and is being tricked. He finally understands he cannot trust everyone around him and eventually gets reunited with Kang Seo Hae.

The 7th episode of the drama Sisyphus: The Myth aired on 10th March 2021. After being shot, Kang Seo Hae waked up at a new place and figured out she is with Choi Jae Sun. The whole episode portrays a nostalgic mood of how anyone in any state longs for a family. Kang Seo Hae terribly misses her mother and feels nostalgic. Also, Han Tae Sul realizes stigma is an individual. Kang Seo Hae also asks Mr. Park for a favor in return for something he wanted for a long time and also asks Choi Jae Sun to leave the country.

The 8th episode of the drama Sisyphus: The Myth aired on 11th March 2021. Episode 8 introduces us to stigma and how he time-traveled to 2001. Han Tae Sul and Kang Seo Hae wents out in searches and clues to track stigmas location, Han Tae Sul finds out it’s Kang Seo Hae’s birthday. Meanwhile, Kang Seo Hae finds a grave on her way back where she finds her diary where it’s mentioned specifically to save Han Tae Sul to save to world. Kang Seo Hae advises Han Tae Sul to stay low for some days, yet he tries to search for the person linked to all the events.

The 9th episode of the drama Sisyphus: The Myth aired on 17th March 2021. The episode is a roller coaster ride of emotions. For the first time ever, we see the two leads enjoying the amusement park since it’s Kang Seo Hae’s birthday, and they celebrate it together with a normal enjoyment at the park, which was very much needed in the story. While still in the amusement park, they strike a familiar threat again, and Kang Seo Hae suspects someone unexpected. 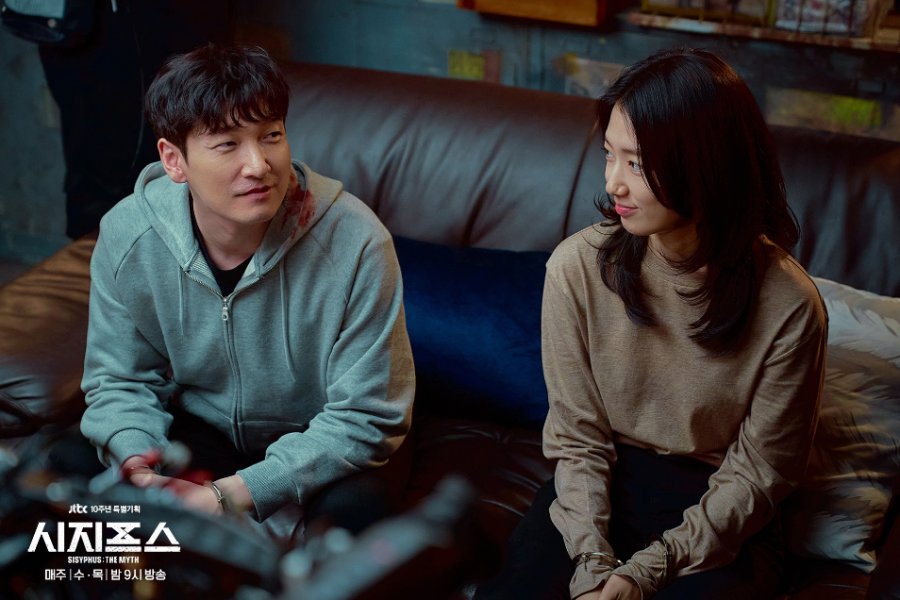 The Episode 10th of the drama Sisyphus: The Myth aired on 18th March 2021. Again Kang Seo Hae falls in trouble, but Han Tae Sul somehow manages to save her, but she was drugged and is slowly disappearing, while her father tries hard to help her out. We also get to see a softer side of Mr.Park. Again Kang Seo Hae in 2035 gives her father a message that she is going to the past and, this time, to succeed. The total assistance of Mr. Park in the drama is well portrayed, and we now look forward to episode 11 that will air on 24th March. The story will unfold from where it left.

The direction of the drama has been done under Jin Hyeok. With the screenwriting under Jeon Chan Ho and Lee Jin In. For the main role, Jo Seung Woo has been cast for the role of Han Tae Sul, and Park Shin Hye has been cast for the role of Kang Seo Hae. With several other actors included as well for the supporting cast. The new paring of Park Shin Hye and Jo Seung Woo is very much liked by their fans and audience.

The drama has a total of 16 episodes and airs on the original network JTBC every Wednesday and Thursday. The show will air its final episode on 8th April 2021. The genres of the drama include science fiction, thriller, drama, fantasy, mystery, and action. The drama is also popularly known as Sisyphus: The Fable and Sijipeuseu. The duration of each episode is approximately 1hr10mins and is also streaming on the global platform Netflix. So, tune in to Netflix anytime to watch your favorite show.