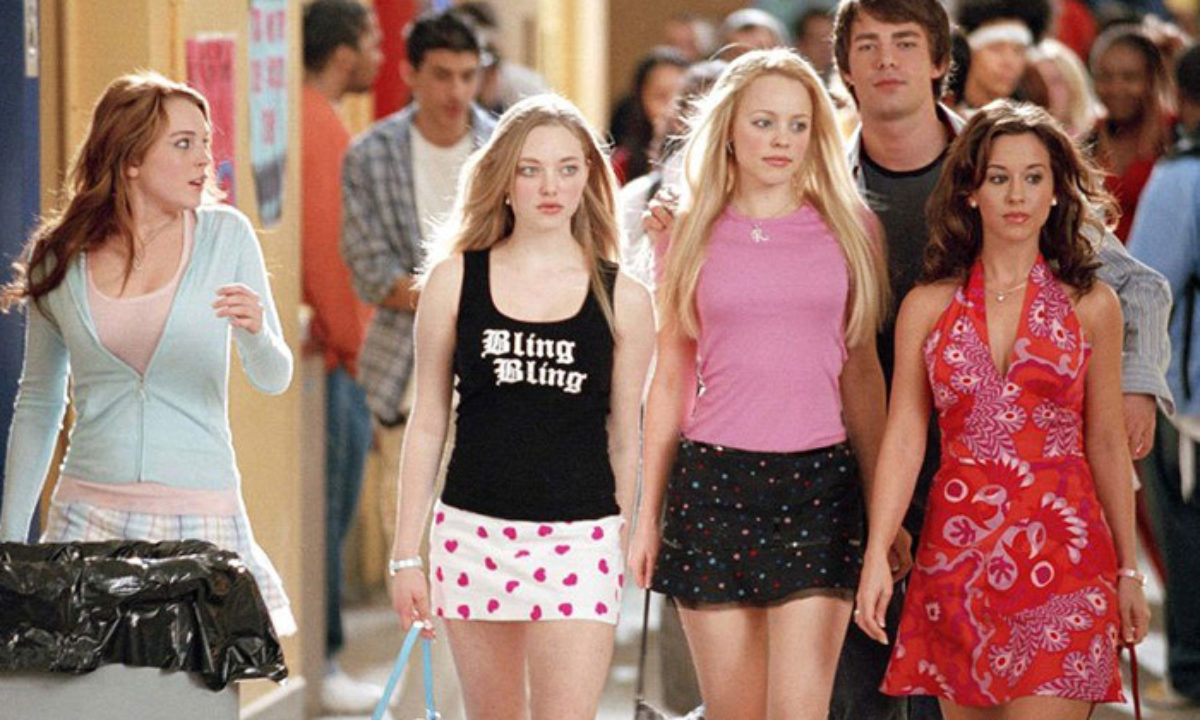 We would tell you right now that Mean Girls caused a cultural reset the moment it came out, and we would be completely right. A legendary classic, this film has something for everyone. While many unknowingly still dismiss this as a “chick-flick”, these people are missing out on something major.

When the film first premiered in 2004, we already knew it was going to be something huge. Over the years, the popularity of Mean Girls has only increased. Added to this, several people are being introduced to its magic – almost 2 decades after its initial release. The movie created a whole other niche for the genre of teen rom-coms and works that came after were almost always pitched against it. That being said, there are several other films in the genre that are just as good as Mean Girls. Rom-coms have always been the rage amongst fans and many movies were made for these audience before and after. We set out to curate a list of films that are similar to this iconic work of cinema and we can say that we have succeeded in this search.

Here are 6 films similar to Mean Girls that you should stream right away: 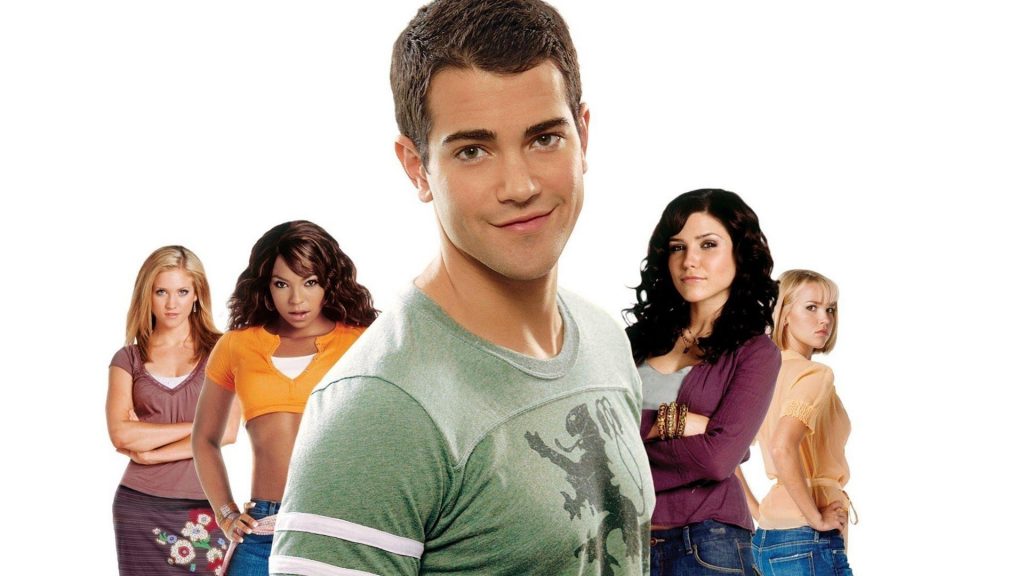 This is a film that premiered in a time where the rom-com crazy was stronger than ever.

John Tucker Must Die is a 2006 film directed by Betty Thomas. The movie features the following stars in the main cast:

The plot of the film follows John Tucker, who is a jock that’s broken many a girl’s hearts. Tired of his antics, a group of his ex-girlfriends decide to plot revenge. Part of the plan includes making him fall in love with a girl who is in it just for the said plot. They plan on making him miserable when the girl eventually breaks up with him. The movie revolves around these characters as they go about trying to make this work. 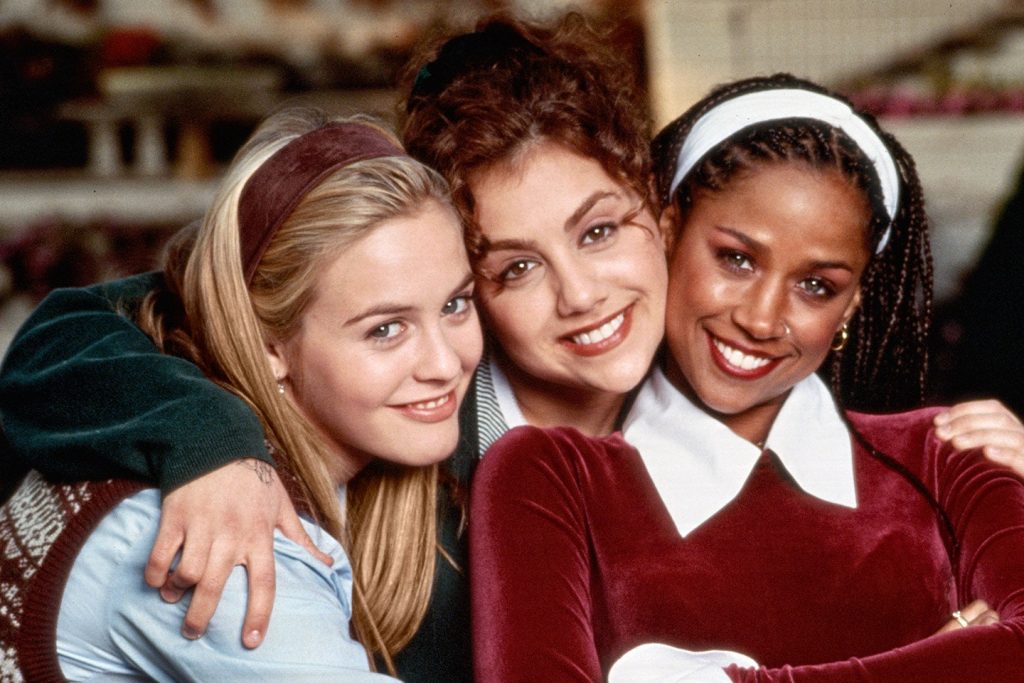 This is one film that we are apprehensive about pitching against Mean Girls because of one reason and one reason only – this is a classic in its own right. Clueless is a romantic comedy that initially premiered in the year 1995. Amy Heckerling had written and directed it and the film is loosely based on the Jane Austen novel – Emma.

The cast of Clueless features:

The plot of Clueless follows Cher – a super-rich high school student with a heart of gold. The movie follows her as she tries to navigate through teenage and everything it has to offer while trying to help a peer gain popularity. It is a coming of age film in the sense that we see Cher discover her own self and feelings as the film progresses.

The movie is similar to Mean Girls because both of these films have given the cinematic universe so much and continue to do so. 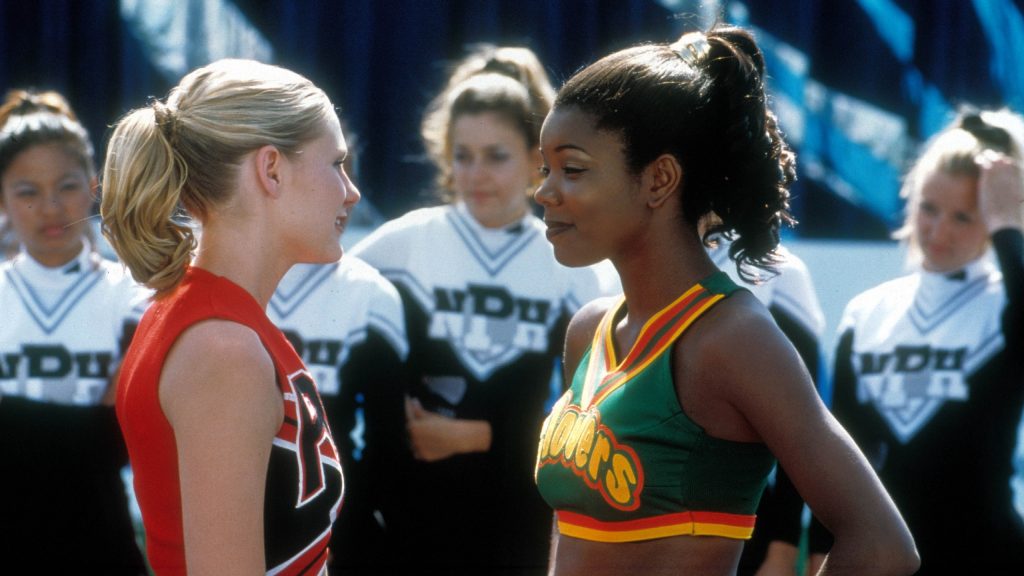 We are always hell-bent on bringing you only the best of suggestions. On that note, the next film we suggest fans of Mean Girls to stream is Bring It On.

Bring It On is a 2000 film directed by Steve Rash, Peyton Reed, Damon Santostefano, Bille Woodruff and Robert Adetuyi. The movie features the following stars in the cast:

The plot of the film follows two cheerleading groups from different schools that compete for the National Cheerleading Title. As Torrance takes over as the new cheer captain, she uncovers some dirty secrets about her team’s past. The movie revolves around the events that unfold after.

If you are looking for a classic teen rom-com with a punch, this movie is it. 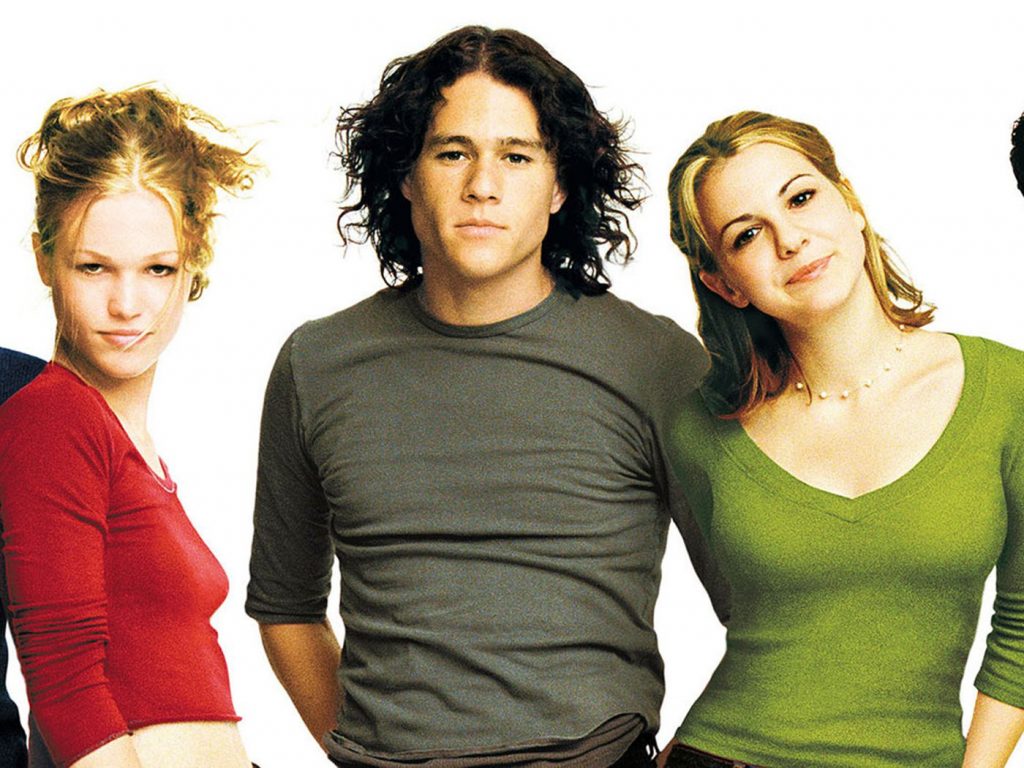 Two reasons why you should watch this film: Julia Stiles and Heath Ledger. If you think we’re kidding, we are totally not. This is a film that will forever be remembered for the stellar performance of the cast and just the overall chemistry between the characters. Apart from these two stars, the movie also has Joseph Gordon-Levitt and Larisa Oleynik in the lead.

Said to be based on The Taming of the Shrew, the movie is a great high-school romantic comedy, much like Mean Girls. The best part about the film is probably the fact that it premiered even before the latter was in production. The movie is well-loved by fans of this genre and we are happy to tell you that there are reasons for this reception. And really good ones at that! 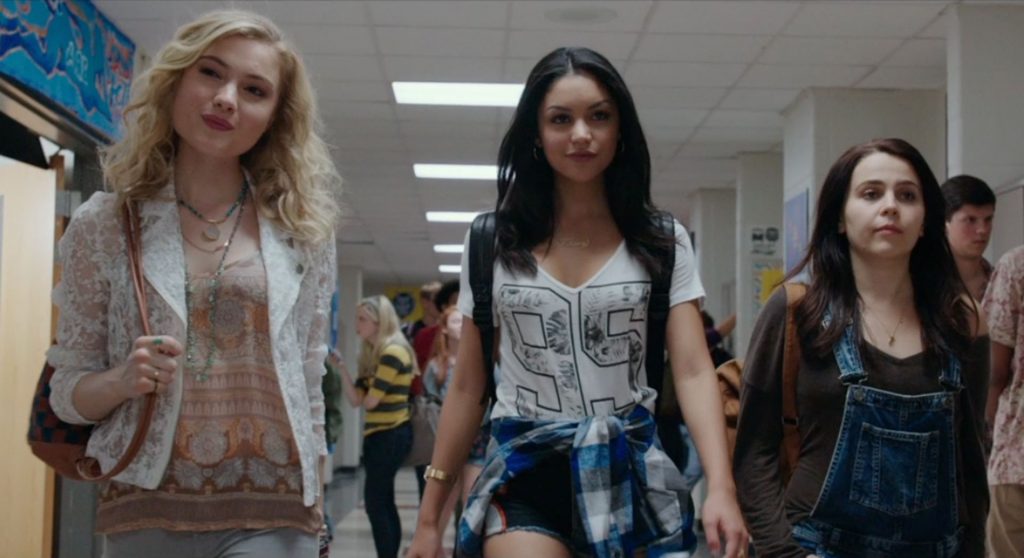 Now, if you’re wondering when we’ll get a little current now is your time because we have some great suggestions for you. The DUFF is one film that made headlines the moment it came out and as a result, changed many a teen rom-com lover’s life.

The film first premiered in 2015 with Ari Sandel behind the direction and a story by Kody Keplinger. The movie featured the following stars:

The movie is lauded for its unique storyline because it features an idea that has not been done this way before. It revolves around the title DUFF and what happens after Bianca comes to know that she, in fact, is one. It is funny and heartwarming towards the end – something all teen romedy fans look out for in films. 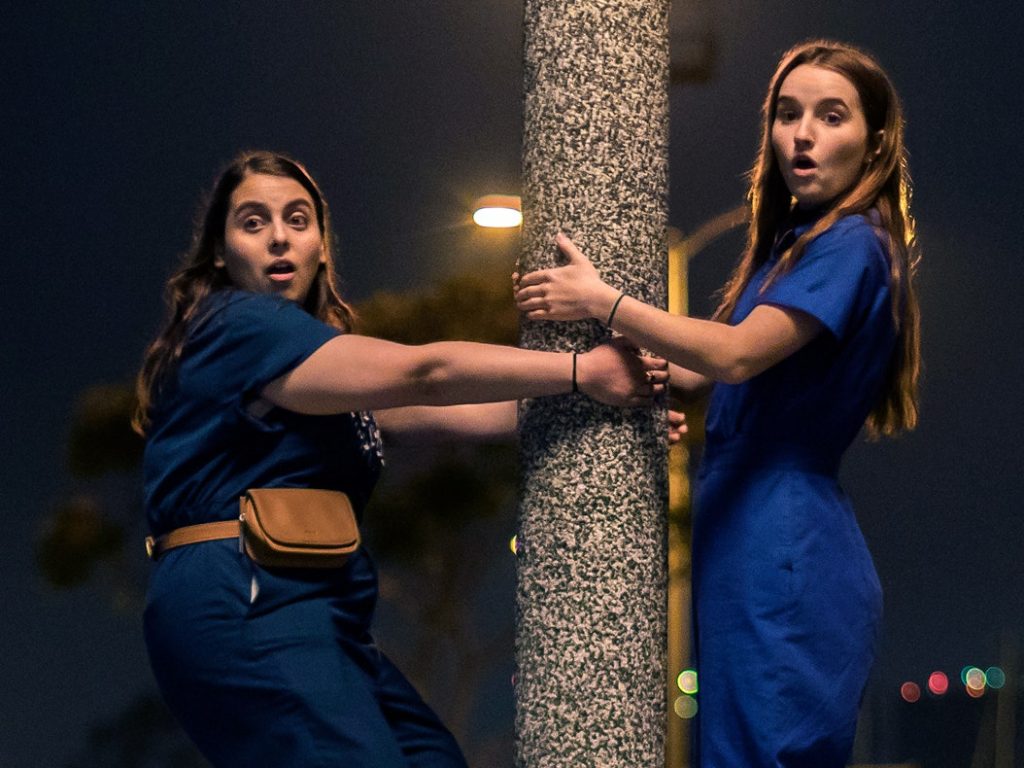 This is probably the most underrated film on this list. Booksmart is a romedy that came out in 2019 and has been doing the rounds online ever since.

The film is directed by Olivia Wilde and has Beanie Feldstein and Kaitlyn Dever playing the lead roles of  Molly Davidson and Amy Antsler. The plot is fresh and the casting is perfect – reminding us of the essence of Mean Girls. It is a coming-of-age film and is for anyone that is looking to watch a film and have a good time. It will give you the giggles and also make you feel a lot of other positive things that you might expect to feel from a film of this kind.

Mean Girls had spoiled the genre for all of us in the best way possible. Although it is impossible for another work to completely emulate what the film is to fans, many come real close. We believe that the above-mentioned films have something special to offer to fans of this genre. We assure you that if you will not be disappointed if you do choose to check these recommendations out – ones we very carefully picked out just for you!