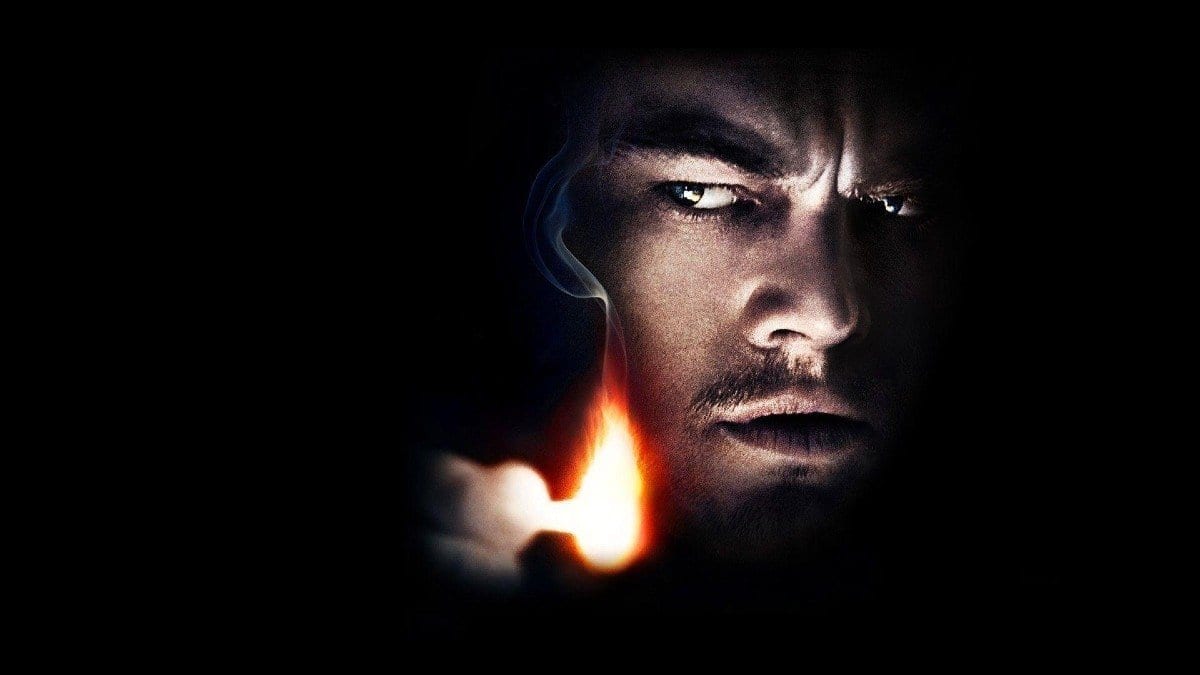 Martin Scorsese’s Shutter Island is a psychological thriller film based on the novel of the same name by Dennis Lehane. The movie follows the story of a Deputy US Marshall, Edward “Teddy” Daniels, who along with his new partner Chuck Aule, has come to Shutter Island to investigate the disappearance of a patient, Rachel Solando, who went missing. Here in this psychological film, we witness two cases that are intertwined with one another. They are played across in such a way that it’s hard to tell what is true, and what is not. Nevertheless, that’s not the only part, as one even struggles to identify the identity of our protagonist. The only take we really have is his appearance, all while his past is seemingly blurred before us. But, who do we believe? So, in this article, we will get the Shutter Island Ending Explained.

The film for the major part sees Leonardo DiCaprio playing the role of Deputy U.S. Marshal Edward “Teddy” Daniels. But alternately we even are revealed an alternative identity. Mark Ruffalo plays the role of Teddy’s new partner and another US Marshall Chuck Aule. He is also revealed to have an alternative identity. Ben Kingsley plays the Head Psychiatrist in the Ashecliffe Hospital, Dr. John Cawley. Max von Sydow played the role of a German Doctor, Dr. Jeremiah Naehring. Michelle Williams played the role of Teddy’s wife, Dolores Chanel, while we see two Rachel Solandos played by Emily Mortimer and Patricia Clarkson. This film that released more than a decade ago on 19th February 2010 has still people scratching their heads regarding its ending. And in this article, we will be giving our own take on Martin Scorsese’s neo-noir psychological film.

The Plot of Shutter Island 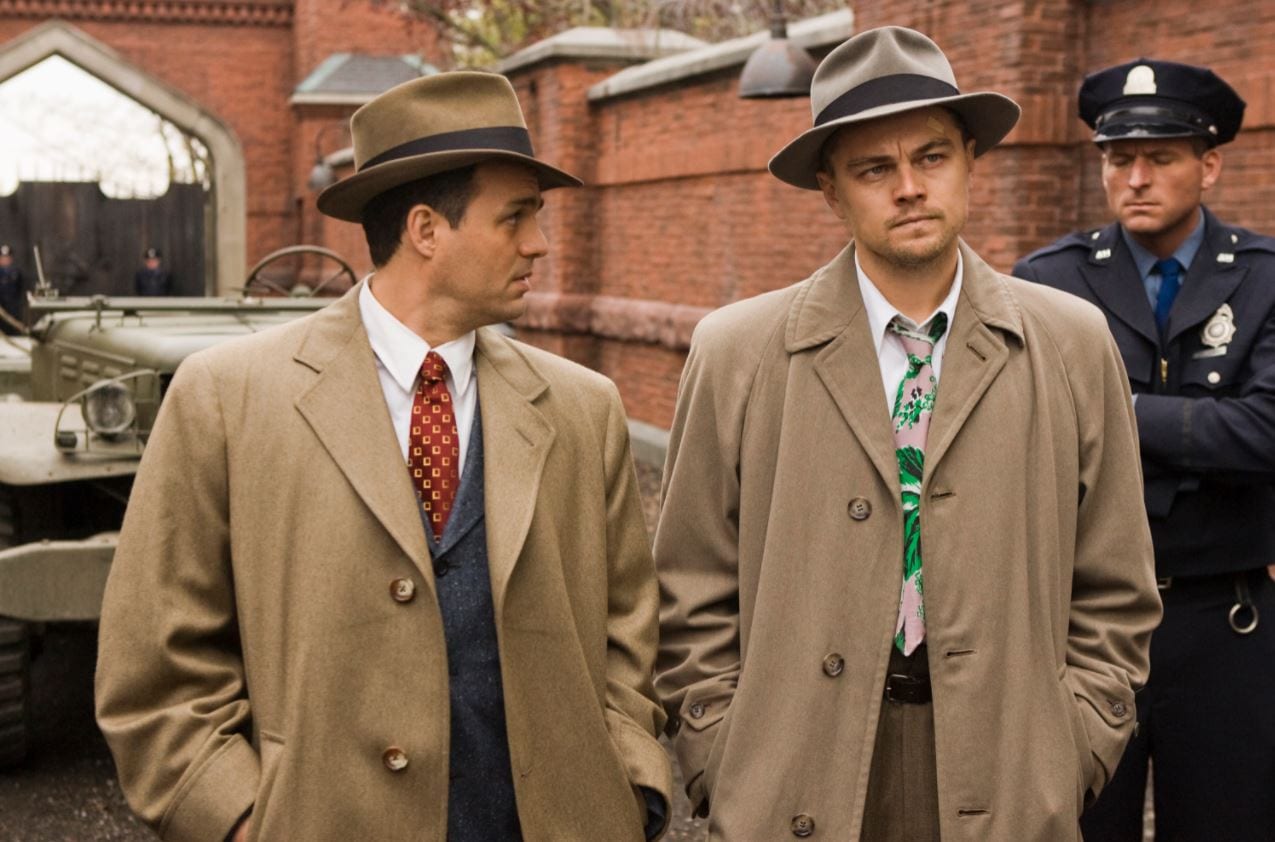 Teddy and Chuck are stuck on the island due to a massive storm, so they have to stay on the island. Here they encounter some uncooperative staff, while the Head Psychiatrist Cawley refused to show any records. Here, even Solando’s doctor, Sheehan had disappeared from the scene. They are told how Ward C along with the lighthouse was reserved for the most disturbed patients thus it was off-limits. And while he interviewed some of the patients, one of them writes down on Teddy’s notepad to “Run”. Teddy later starts to have migraines as he has visions of his time at war. He even sees memories of his wife as she was burnt by Andrew Laeddis.

Teddy encounters a man from Ward C named George Noyce. He tells him how the hospital has been researching lobotomization, and they make use of their patients to do so in the lighthouse. He even warns Teddy how the whole island was an elaborate game set up for Teddy. Not knowing what he meant, Teddy regroups with Chuck to reach the lighthouse. During this, he loses track of Chuck only to find a woman named Rachel Solando in a cave. She claims to have been a psychiatrist who had discovered the hospital’s ill-doings before she was forced as a patient into the hospital. Teddy goes back to the hospital to find no sign of Chuck. 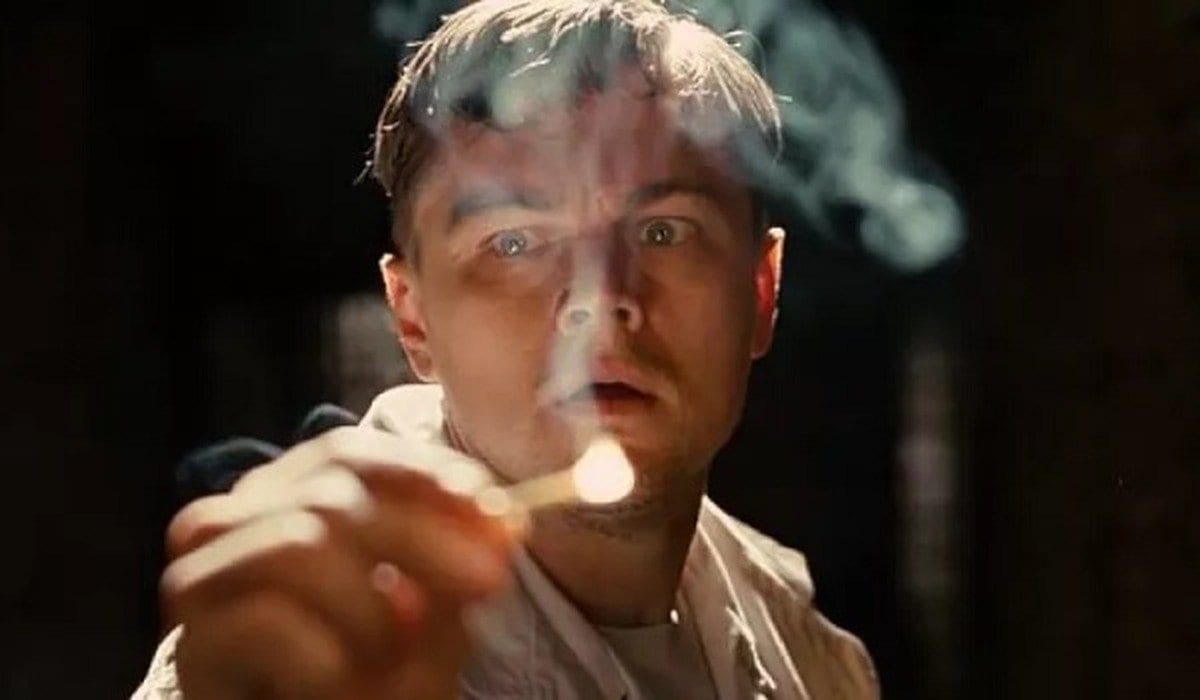 To find Chuck, Teddy goes to the lighthouse to find Cawley waiting for him. Cawley claims how Teddy is in fact Andrew, the man who incarcerated his wife after she went insane to drown their three children. The names Andrew Laeddis, and Dolores Chanel were in fact anagrams to Edward Daniels and Rachel Solando. And the girl he saw in his dreams was his daughter, Rachel. Even Chuck, his partner was also a Doctor (Sheehan), who was playing his part in the role play. All of this was done so that the doctors can build up an intervention for Teddy who can finally realize that he was Andrew Laeddis. Overwhelmed by all the information thrown at him, Teddy faints.

What Happens in Shutter Island Ending? 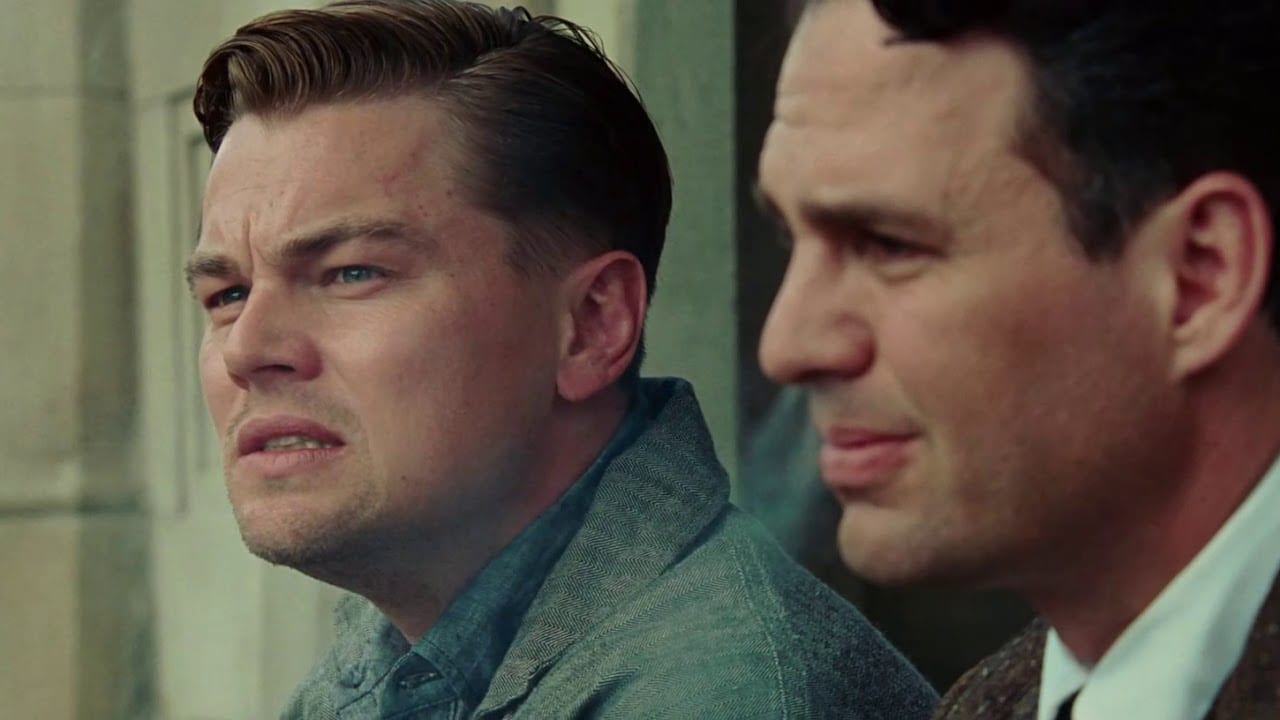 In Shutter Island Ending, Teddy/Andrew wakes up in the hospital as he has been placed under the care of Dr. Cawley. Here he meets Sheehan, the Warden, as well as the nurse who played Rachel Solando. Now that Cawley had revealed to Teddy that he was part of a big roleplay to bring him back to sanity, Andrew seems to have accepted it. The replies he gives are those which feel satisfying if Andrew finally accepted himself. Thereby, the doctor’s experiment seems successful, only for the problem that they have apparently reached this stage once prior. And even after that Andrew had regressed back to Teddy. If at this point, Andrew is unable to stay “sane”, he will have to be lobotomized.

Sometime later, we see Andrew relaxing nearby the hospital grounds when Sheehan arrives to chat with him. Here, while speaking to him Andrew refers to Sheehan as Chuck. He exclaims how there is something wrong going on, on the island and they must run away somehow. Identifying that Andrew seems to have regressed back to Edward Daniels, Sheehan shakes his head towards Cawley in a way that indicates that Andrew has gone back to being Teddy. So, in an inaudible way, Cawley asks Naehring to get Andrew to the lighthouse to get him lobotomized.

Just as the guards were arriving for him, Andrew/Teddy asks Sheehan, “Which would be worse: To live as a monster, or to die as a good man?” This makes Sheehan doubt his judgment as he calls out to him as Teddy, but receives no reaction. While walking towards the guards, he looks towards Cawley in a way that indicates that something deeper was in the works. 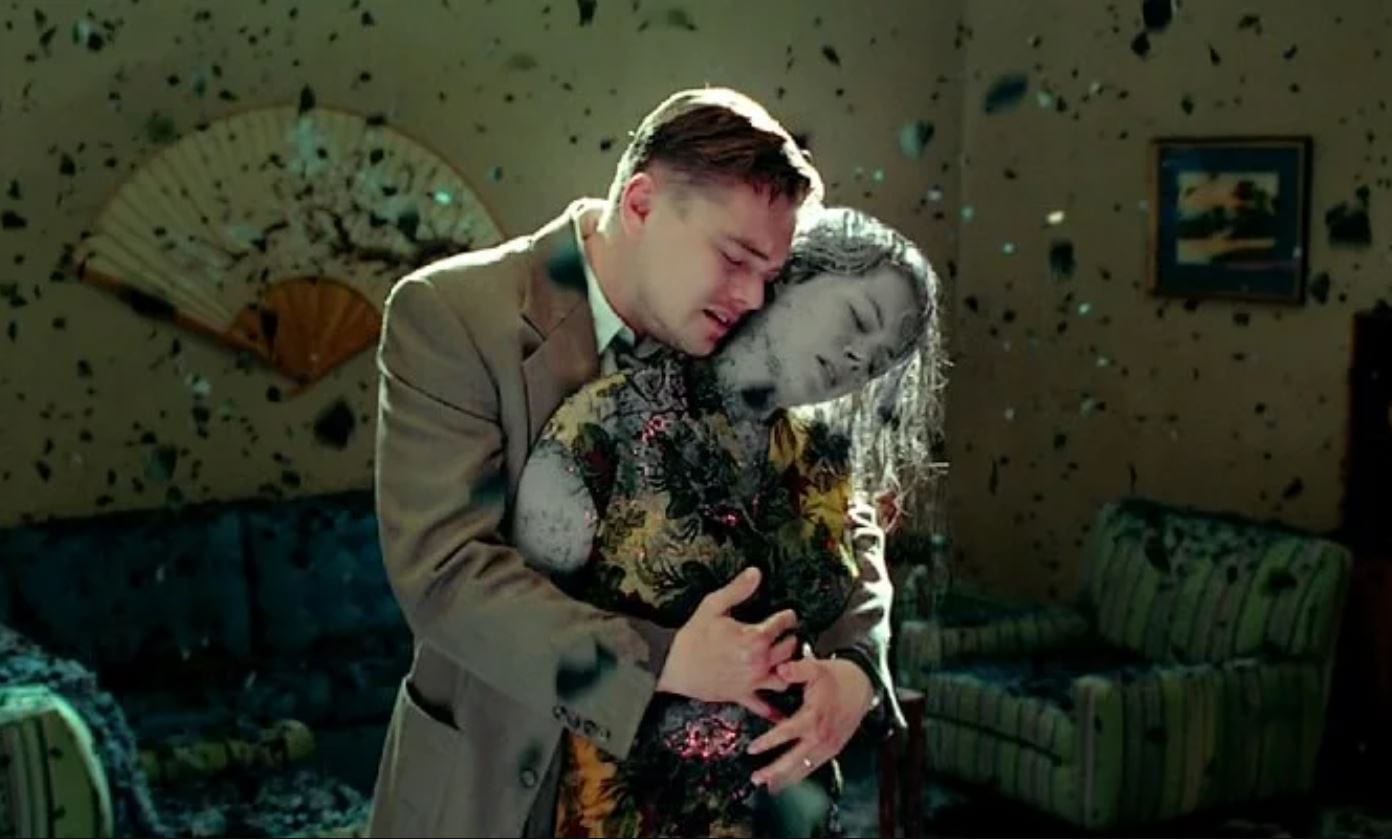 Andrew grieving over his wife’s death.

One thing’s for sure that Scorsese leaves a lot of room for interpretation to us viewers. Shutter Island Ending leaves the viewers on an ambiguous note where each of the viewers can have their own ending. Most credible or commonly agreed upon ideas point to two possibilities, the first one being that Andrew Laeddis did exist. While possibly he was in no way sane. He was traumatized after his children’s death after which he shot down his wife, The fact that his children were drowned causes him to completely eliminate visualizing water. There is a scene with an old lady where Andrew interrogates some patients. While there are obvious signs of a threat to Andrew, due to the “Run” note. We see that Andrew cannot see the glass of water which the lady drinks. Moreover, when she places it back on the table, it is in the wrong hand.

So, maybe knowing that he has become a monster over time, he wants to reset himself. Thus, he pretends to have regressed to get lobotomized. Additionally, either way, the interpretation goes, the protagonist isn’t a US Deputy Marshall considering he forgot who he answers to. Also, the fact that he wasn’t able to identify a fake gun from a real one, hardly helps his case. 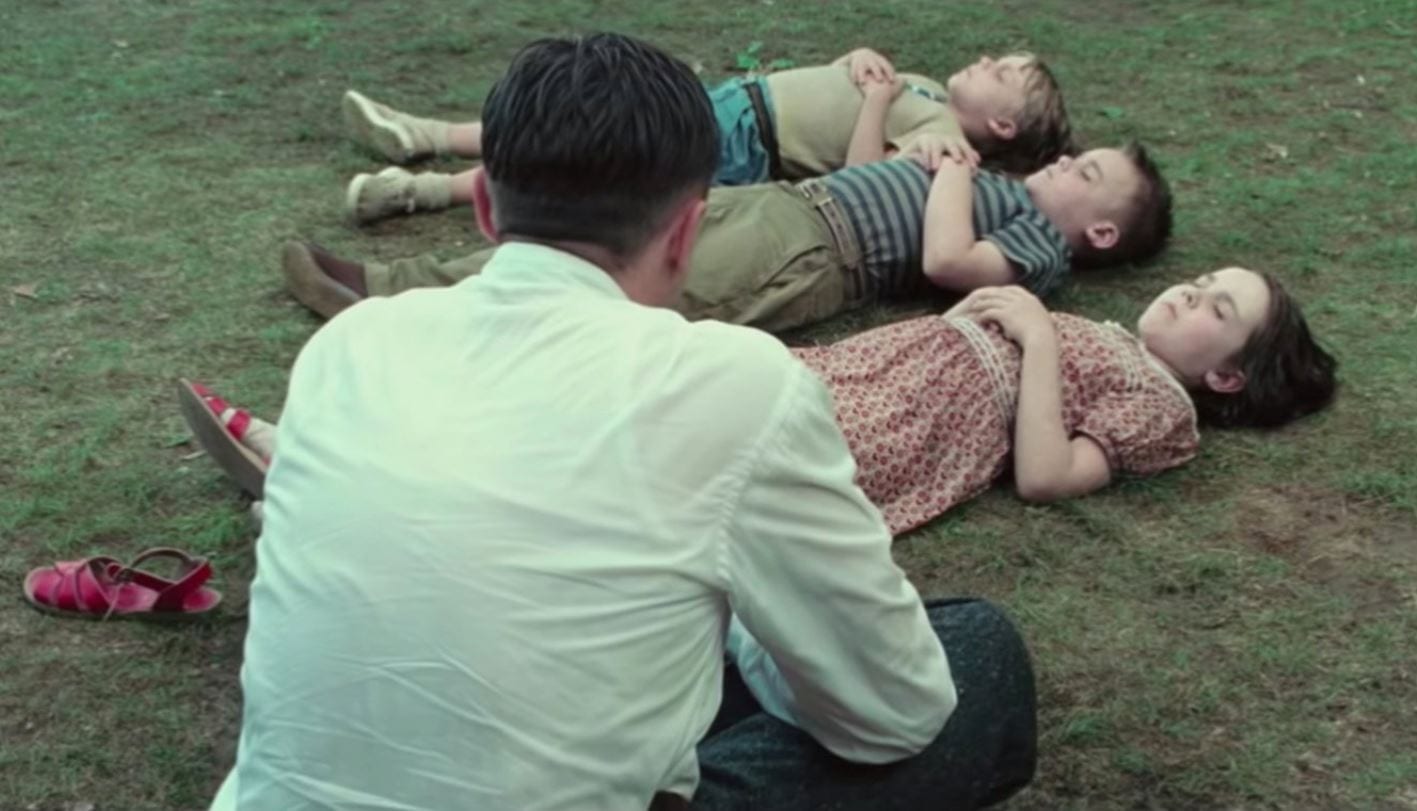 Teddy finding out that his kids had died from drowning

The other theory states how Andrew never existed, and it was all a hoax created by the doctors. Teddy was in fact an old soldier who later may or may not have turned into a pyromaniac killing his wife. Either way, he was there to actually investigate the case of his dead wife due to the memory loss caused due to PTSD. But as he was in the hospital, the staff had to hide their internal affairs from him, therefore they declare several rules to pin Teddy down. Nevertheless, the questioning one beings how Cawley claims that the storm was just a ruse to keep Teddy from leaving the island. While theoretically, Teddy finds some clues about the hospital’s ill-doings only to be gaslighted by a group of government-fueled conspirers. Lastly, Teddy only remembers one of the seemingly three kids he had, from a lingering dream.

Where to Watch Shutter Island?

You can watch Shutter Island on Netflix, Amazon Prime Video, Apple TV, Now TV, Sky, Paramount, and StarzPlay. If you do not wish to subscribe to any of the above streaming platforms, you can buy or rent the movie on YouTube TV, Amazon Prime Video, Vudu, Google Play, Microsoft Store, and iTunes. You can also watch the movie on live streaming websites such as DirecTV, Xfinity, and FuboTV.

Also Read: Top 25 Martin Scorsese Movies That You Should Watch