After finding out that Sun Joo knows about the affair Myung Seop decides to break up with Mi Ra. Also, Sun Joo and Mi Ra gets into an accident. 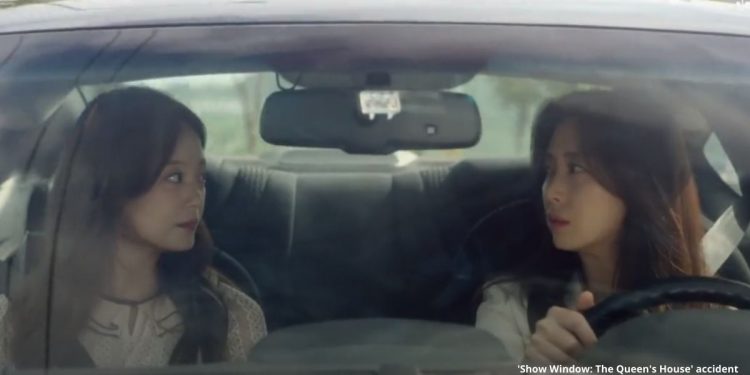 After finding out about her husband’s affair Sun Joo tries to calm herself down as they are in the middle of his Presidential ceremony. Sun Joo gives her best act in front of the guests smiling and cutting the cake. Once she reaches home she calls Myung Seop home right away. When he receives her calls he knows something is wrong but does not know what is it exactly. In ‘Show Window: The Queen’s House’ episode 9 Mi Ra will begin her journey of taking revenge on Sun Joo and Myung Seop.

Everyone thinks now that Sun Joo has given her husband an ultimatum he will break things off with Mi Ra. However, the situation becomes more complicated when he finds out that Mi Ra is pregnant. For all the neighborhood Sun Joo and Myung Seop are the idol couple but no one knows the reality of their broken marriage.

Till now we have seen that Yoon Mi Ra tries to build a relationship with Sun Joo. There is a point when Sun Joo thinks that her husband is having an affair with Mi Ra but later she is relieved to see that Mi Ra’s boyfriend is a different person. Still, Mi Ra does not stop persuading Myung Seop and finally, Sun Joo catches them together. After this, no one knows how but Mi Ra gets injured at Sun Joo’s anniversary party, and Sun Joo is arrested for attempted murder.

At the party, people witness Mi Ra lying on the floor with a knife wound and Sun Joo holding the knife. Even so, she refuses the allegations of her attacking Mi Ra. The detective starts his interrogation and Sun Joo begins telling her story from when she sees her husband kissing Mi Ra. Finding out about her husband’s affair breaks Sun Joo. Even then she has to be strong and act normal in front of the world. After leaving the company ceremony Sun Joo drives to a secluded place and cries sitting alone.

After the company ceremony instead of going to his wife Myung Seop decides to visit Mi Ra because she is the one who makes him happy. However, she needs a little more to gain her happiness. When Myung Seop tells Mi Ra that she will not have to worry about her uncle anymore she is relieved. Also, as she is happy she confesses her wish to have a baby with Myung Seop. No matter how much Myung Seop might love Mi Ra he cannot deny the reality. He tells her if she keeps acting this way he won’t be able to continue their relationship.

As Myung Seop is leaving Mi Ra’s house he is surprised to see his wife waiting for him outside. She tells him to get in the car. Sun Joo drives rashly to a silent place and there they have the inevitable conversation. When Sun Woo confronts Myung Seop about his affair he shamelessly says that out of so many women who have tried to seduce him he made one mistake. Also, he says that Mi Ra means nothing to him and he will end the relationship with her. Will Sun Joo believe her husband and forgive him?

Now that Sun Joo has confronted her husband it is time to face Mi Ra as well. While talking to Mi Ra, Sun Joo finds out that they have been seeing each other for two years. After hearing all the facts Sun Joo decides to divorce Myung Seop. She is firm on her decision but when she thinks about her children she realizes that the divorce might hurt them even more.

The ‘Show Window: The Queen’s House’ episode 9 release date is 27th December 2021. In the upcoming episode, Mi Ra keeps calling Myung Seop even after he ends things with her. Because of this Sun Joo becomes more furious but Myung Seop promises to take care of it. When he arrives at Mi Ra’s house he finds out that she is pregnant with his child. Later, Mi Ra decides to tell the truth about her pregnancy to Sun Joo as well. Is this the reason why Sun Joo tries to kill Mi Ra?

Where To Watch Show Window: The Queen’s House’ Episode 9?