After Sun Joo finds out that her daughter knows about Myung Seop's affair, she decides to change her plan of revenge. 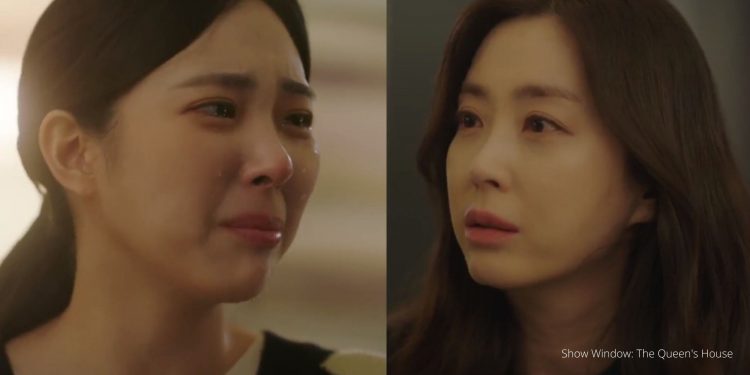 After many episodes and suspense finally, we are close to finding out who attacked Mi Ra on Sun Joo’s anniversary. All the events that have been happening in the drama are connecting dots to the mystery. Also, after discovering the fact that Mi Ra is trying to break their family, Sun Joo decides not to divorce Myung Seop. The ‘Show Window: The Queen’s House’ episode 15 will reveal the real culprit of Mi Ra’s murder.

Myung Seop faces a new scandal involving victoria’s shoes. Moreover, he suspects that Mi Ra has sold their shoe designs to the Chinese traders. After Myung Seop was able to solve the problem, he suggests Mi Ra go live abroad for a while. However, she decides to stay back at Young-Hoon’s house, and they plan their next step.

Till now, we have seen that Tae Hee finds out about Myung Seop’s affair. Her mother and father cannot understand why is she acting weird. After a few days, Tae Hee tells Sun Joo that she saw her father kissing Mi Ra at their house. This revelation shocks Sun Joo, and she decides to punish Myung Seop. However, her plan is very unconventional. Sun Joo starts to act like her past self and tells Myung Seop that she does not want a divorce. Also, she is ready to hand over the reins to him as he is the only one who can help LaReine.

The first step in Sun Joo’s plan is creating distance between Mi Ra and Myung Seop. She sells the Victoria shoe design to a small-scale shoe producer and asks him to distribute the shoes to all the Chinese clients. Moreover, she provides a list of the clients that were involved in the previous scandal. All the shoes at Victoria are designed by Mi Ra, and now these designs are showcased by LaReine. When Myung Seop finds out that Victoria’s shoes made it’s way to the Chinese market, he suspects Mi Ra. He thinks that she might have sold the designs for money.

Cha Young-Hoon is working with Mi Ra to separate Myung Seop and Sun Joo. When Sun Joo was at Young-Hoon’s place the last time, she overhears him talking to Mi Ra about their plan. It breaks her heart to know that she has been betrayed by a friend. After straightening the matters at home, Sun Joo visits Young-Hoon. She confronts him about his actions and asks for an explanation. Both of them are emotional while talking, and Young-Hoon says that he will not let Sun Joo suffer anymore with Myung Seop. Also, he wants to bring Sun Joo by his side as a lover.

Sun Joo agrees to share a relationship with Mi Ra and Myung Seop. However, Myung Seop does not know that this is part of her plan to push him out of the company. Tension and suspicion grow between Myung Seop and Mi Ra, and finally, he asks her to leave the country for a while. Even then, she decides to go to Young-Hoon and gives him hope. She tells him the last move left to separate Myung Seop and Sun Joo. He decides to believe her and lets her live in his guest house for the time being.

The ‘Show Window: The Queen’s House’ Episode 15 Release Date is 17th January 2021. After realizing that there is no other choice left, Mi Ra decides to call Sun Joo. She tells her that she has the original transaction records that could prove her mother’s innocence. However, her condition is that she wants Sun Joo to divorce Myung Seop. Also, Tae Hee tells Myung Seop that she saw him kissing Mi Ra, and she won’t forgive him for this.

Where To Watch ‘Show Window: The Queen’s House’ Episode 15?