Mi Ri is crossing all the boundaries to break Sun Joo's family. First, she tries to blame Sun Joo of having an affair then, she intentionally kisses Myung Seop at his house for his daughter to see. 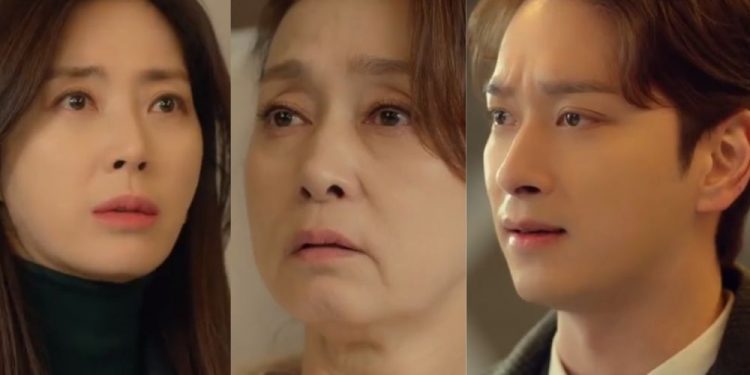 Sun Joo is in a sinking boat trying to manage the company and her family. On top of this, her brother Jung Won abandons her and takes Myung Seop’s side. He desires to take over the LaReine company as he is the only son of the family. When Sun Joo is not left with any resort she turns to Myung Seop for help and in exchange, he takes the temporary position as the chairperson. In ‘Show Window: The Queen’s House’ episode 14, Sun Joo’s family will find out about Myung Seop’s affair.

Mi Ra is trying her best to break Sun Joo’s family. She takes pictures of Sun Joo and Young Hoon together and sends them to her daughter. This makes Sun Joo’s daughter question her mother about her affair. Later, when she tells this to Myung Seop he blames her and accuses her of being emotionally indulged with someone. However, Tae Hee finds out the truth when she sees her father kissing Mi Ra at their house.

Till now we have seen that Sun Joo’s father expires and her mother goes to Canada to bring his body back. While she is in Canada, Kang Im has a cerebral stroke and is hospitalized. In her absence, Sun Joo takes over the role of LaReine’s chairwoman but Myung Seop keeps creating problems for her. She is facing many troubles like the breach of contract and workers strike. Also, Mi Ra tips off a reporter that Sun Joo is having an affair. This forces her to appear on a Tv show with her husband to showcase what a perfect family they have.

As Sun Joo is unable to solve the problems the company is facing Myung Seop doubts her competence. He tells her that she belongs back at home as a homemaker and a mother to their children. Even though he is in no position to make any speculations he says that he is the one who should be sitting at the chairman’s seat not her. Later, as Kang Im returns home they have a funeral for Sun Joo’s father but an uninvited guest appears there making a scene. She is Jung Won’s mother and the person Myung Seop has been looking forward to. She will help him take over LaReine.

After the funeral, Jung Won’s mother visits her at the hospital. When Jung Won sees Kang Im treat his mother rashly he snaps and leaves the hospital. Both Sun Joo and her mother are shocked to see Jung Won behave this way. They have always been a happy family but for Jung Won, he has always longed for his mother. He promises his mother that he will be a faithful son to her. After he leaves her house, she calls Myung Seop and tells him that she is becoming close with her son.

Sun Joo visits Young Hoon for a consultation but ends up having a good sleep on the chair he carved himself. Looking at her makes Young Hoon’s instinct is to take care of her and this shows how much he loves her. As Sun Joo is drowning in LaReine’s problems her brother decides to abandon her in the middle of their journey. This makes her very sad as he is the one person she has always counted on. As her last resort, Sun Joo turns to her husband and asks him to take care of the Philippines strike. In exchange for his help, Myung Seop tells Sun Joo to hand over the chairperson’s seat to him.

The ‘Show Window: The Queen’s House’ episode 14 release date is 11th January 2021. After abandoning his sister, Jung Won joins Myung Seop’s side but his true motive is not revealed. We discover that Jung Won desires to take over LaReine and Myung Seop’s intention is to help him do so. Later, Mi Ra visits Young Hoon and they talk about their mutual goal to separate Sun Joo and Myung Seop. However, they don’t want to hurt the people they love in the process.

Where To Watch ‘Show Window: The Queen’s House’ Episode 14?