Jung Won is deeply in love with Mi Ra but she makes a deal with Sun Joo in order to get Myung Seop back. The deal is for her to make Jung Won realize that she does not love him. As a result Mi Ra ends up telling him that she is still in love with his brother-in-law Myung Seop. 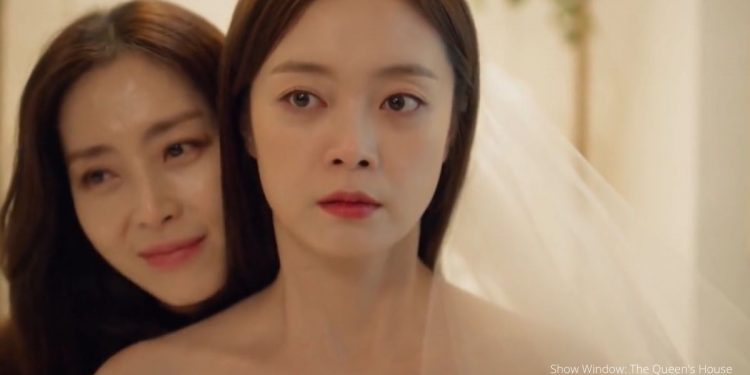 Sun Joo has finally realized that her husband is not someone she could forgive. Mi Ra suggests that the whole family go out on a trip. On this trip, many unfortunate instances take place. As Myung Seop still has feelings for Mi Ra, he gets jealous when he sees her being close with Jung Won. In ‘Show Window: The Queen’s House’ episode 12, Sun Joo decides to divorce Myung Seop as she catches him kissing Mi Ra in the shed.

Till now, everyone thought that Myung Seop made a mistake dating Mi Ra, but in the light of his recent actions, we could say that he is an evil person. He pretends to love and care about his wife, but all he wants, in the end, is his mother-in-law’s company. Also, he plans to bring Mi Ra on his side once he takes over the reins and leaves Sun Joo for good.

Till now, we have seen that Jung Won brings Mi Ra home introduces her as his girlfriend. Hearing this makes Sun Joo mad, and she threatens Mi Ra to leave her brother. This does not work as, in return, Mi Ra threatens Sun Joo saying if she forces her to do anything, she will reveal that she is Myung Seop’s mistress. Meeting Mi Ra after so many years brings up suppressed emotions for Myung Seop. He goes to her place to convince her not to do anything bad, but she is in no mood to listen to him.

Not being able to reach Mi Ra through anger, Sun Joo decides to devise a new plan. She gives Jung Won and Mi Ra her blessings to get married. The whole family goes on a trip to a villa where Mi Ra tries to win over Sun Joo’s mother. Late at night, Myung Seop sees Mi Ra and Jung Woo being close through the window, and this makes him very jealous. This leads to him confronting Mi Ra about her actions. While their conversation turns to passionate kissing, Sun Joo catches them together in the shed. Watching this, she is not able to hold back and goes straight back home. Myung Seop follows her home and apologizes, but this time she will not forgive him.

Even though a mother-in-law Kang Im has strict rules for Myung Seop to follow. He has always adhered to these rules, but now that he realizes he might lose everything, he is acting on his own. He fires President Son without consulting his mother-in-law, and this makes her furious. Somehow he convinces her that reform is the best way forward, but she is skeptical of his intentions. After what happened at the trip, Sun Joo asks Myung Seop for a divorce, but he refuses. He said that he would not give divorce, and neither will he give up his seat at the company. Finally, Sun Joo walks away, saying that she resents loving a person like Myung Seop.

After realizing Sun Joo might take his president seat at the company, Myung Seop decides to show his final hand. Also, Sun Joo’s friend finally meets Mi Ra. He knows everything about her life but meets her for the first time. The next day, Sun Joo takes Mi Ra to a wedding dress boutique to help her choose her wedding dress. This does not sit well with Mi Ra, as she knows that Sun Joo has an anterior motive. Will Mi Ra go through with the wedding even though she still loves Myung Seop?

The ‘Show Window: The Queen’s House’ Episode 12 will be released on 4th January 2021. In the upcoming episode, Sun Joo will make a deal with Mi Ra, and in exchange, she is ready to give up Myung Seop. The first condition of the deal is that Mi Ra will have to make Jung Won give up on their relationship. When Mi Ra tries to go through with this deal, Jung Won suddenly proposes to her, and this makes her silent. However, after some time, she confesses that she is in love with Myung Seop.

Where To Watch ‘Show Window: The Queen’s House’ Episode 12?

Cobra Kai Season 4 Ending Explained: How Did The Series Conclude?