After the accident Mi Ra loses her baby and Myung Seop decides to break up with her. In order to get her revenge Mi Ra goes after Sun Joo's brother Jung Won. 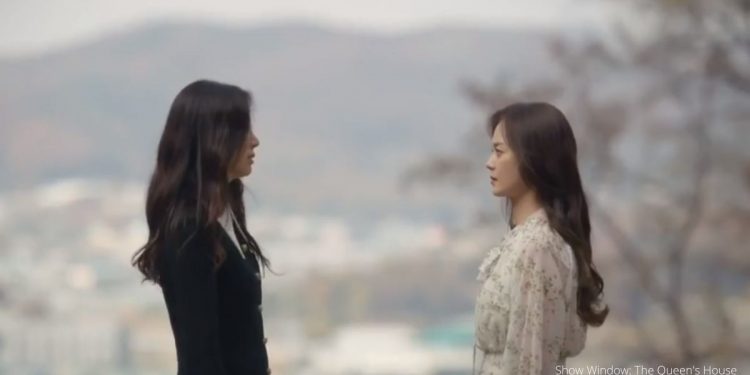 Mi Ra is a strong-willed woman, and all she ever wants in her life is to have a baby. When she gets into a car accident with Sun Joo she suffers a miscarriage. Later, when she finds out that Myung Seop has chosen his wife over her, she is furious and is out to get revenge. Also, she hides the fact that she has lost the baby from everyone. In ‘Show Window: The Queen’s House’ Episode 10, Sun Joo thinks that her life is going to be fine now that Mi Ra is not in it anymore, but she is in for a surprise.

After the break-up, Myung Seop decides to sell the place Mi Ra is living in, and this makes her very mad. Even though this is the right decision for his family, Mi Ra does not back down and decides to keep pursuing him. However, she decides to change her plan a little and go after Sun Joo’s brother. When Sun Joo finds this out, she is ready to kill Mi Ra. Let’s find out out what happened in the previous episode.

Till now, we have seen that Myung Seop finds out that Mi Ra is pregnant. This news makes him tense instead of happy. Seeing her husband worried, Sun Joo decides to talk to Mi Ra and tell her to leave her husband. However, while they are driving back from the cemetery, Mi Ra reveals that she cannot leave Myung Seop because she is pregnant with his child. Hearing this makes Sun Joo lose all her senses, and they get into an accident.

After the accident, Myung Seop gets a call from the hospital. The receptionist is confused as he is the emergency contact for both Sun Joo and Mi Ra. When he reaches the hospital, he decides to stay by his wife’s side. After they get back home, Sun Joo asks Myung Seop if he knew that Mi Ra is pregnant? Sun Joo and Myung Seop come back home whereas, Mi Ra is still at the hospital. She suffers a miscarriage and loses control over her.

After getting discharged from the hospital, Mi Ra does not tell anyone about her miscarriage. Instead, she goes to see Sun Joo the next day and tells her that the baby is safe. Then she forcefully enters Sun Joo’s house and makes her and Myung Seop uncomfortable enough that they ask her to leave. After they ask her to leave, she even makes Myung Seop drive her home. At home, as they try to solve their situation, Myung Seop suggests Mi Ra should go abroad to study. Mi Ra does not take this well, but Myung Seop insists that this is the best thing for their future. Will Myung Seop’s become successful in taking over her mother-in-law’s company?

While talking to their friends after the tango class Sun Joo and Myung Seop finds out that Mi Ra is not actually pregnant. The next day Mi Ra finds out that Myung Seop put the house she is living in out for sale. In her rage, she goes to Sun Joo’s house, and they have a huge argument. As the argument escalates, we find out that Sun Joo’s sister committed suicide in the past because the married man she loved to death left her for his family. Later, Myung Seop accuses Mi Ra that it is her fault that their baby is dead and decides to leave her for good. After this, no one knows where Mi Ra disappears.

The ‘Show Window: The Queen’s House’ Episode 10 release date is 28th December 2021. After the truth about Mi Ra’s pregnancy is out, Myung Seop decides to end their relationship. Also, Sun Joo tries to confide in her friend, who is a psychiatrist. After a little time has passed, Sun Joo thinks her life is back to normal, but her brother gives her a big surprise. Jung Won invites his girlfriend to meet his sister, and to everyone’s shock, it is Mi Ra. What storm will Mi Ra bring to Sun Joo’s life now?

Where To Watch ‘Show Window: The Queen’s House’ Episode 10

Are Dr. Oakley and Shane Still Married? Do They Have Kids?