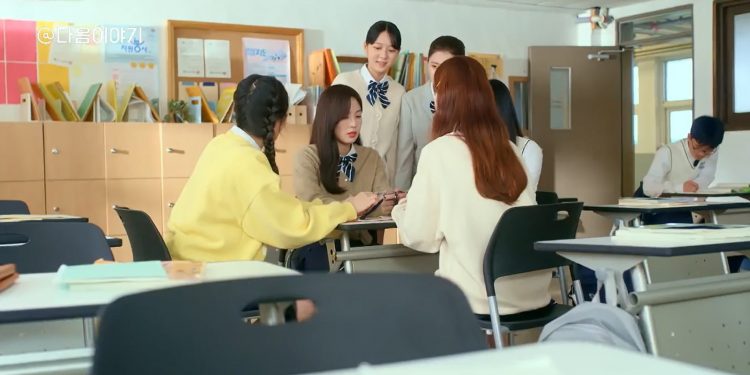 Just as we thought things were looking up for Shin Sohyun in the drama, episode 7 of User Not Found hints at how they will only be getting tougher. Shin Sohyun and Han Yeji both play the roles of two girls with exactly the same name: Yoo Minjae. The plot of the drama relies heavily on the confusion the similar names create. While one is a rumored idol trainee who isn’t just pretty and popular but also good at studies, the other is the polar opposite.

While Shin Sohyun and Han Yeji do not have the best start to their relationship, the last episode gave us some unexpected scenes. Both the girls have different goals at their new school. Yeji reluctantly agrees to help Sohyun out, but will she be able to stick to the agreement even when things begin to get more complicated? Will it be possible for both the girls not to grow closer after knowing so deeply of the other? The chemistry between both of them as well as the other characters is lovely and makes the drama a good watch. All the characters are interesting and seem to have a depth that is begging to be explored.

What happened previously on ‘User Not Found’?

The story of this drama is begging to be delved further into. The mysterious touch to all the character’s pasts makes the series very gripping.

There is something that transpired between the cousins that makes it almost suffocating to watch them share a scene. The actors do a very good job of displaying these emotions. Yijoon seems to constantly be having flashbacks to a certain event in the past. In one of the scenes from the last episode, Hyejun asks him if he is ‘still thinking about that incident’. Yijoon responds very coldly and with sheer nonchalance even though his brain cannot help but conjure up moments from the past.

As much as Yijoon hates to accept it, he cannot help but draw towards Minjae. When Hyejun talks to him about her, Yijoon quickly remarks on how he mentions her often these days. This earns him a witty reply from Hyejun, who says ‘Didn’t you say you had no interest in her?’ Though Yijoon brushes the topic off, the next time they have music class, he shares his AirPods with Minjae so they can listen to music together. The two make an awfully cute pair; shy, awkward, and utterly adorable.

The biggest (and most refreshing) part of the previous episode was both the Yoo Minjae’s warming up to each other. Han Yeji unexpectedly agrees to help Shin Sohyun. The two come to an agreement that they will live as the other till they graduate. Yeji wants to not be bothered, receive attention, and graduate without much commotion. Sohyun is basking in her newly found fame and attention which she is enjoying immensely. It doesn’t not make sense for them both to agree to be the other, right?

User Not Found Episode 7 will be released on Friday, 24 December 2021. This series is receiving much attention for its cast and story. Many like the focus on both the female characters and their chemistry.

Where to Watch ‘User Not Found’ Episode 7?

User Not Found is up for streaming on Viki. This romance web drama in a high school setting consists of 22 episodes. With a long road ahead of us, many viewers are excited to see the inevitable twists and turns that will take place in the drama.

What to Expect From The Upcoming Episode?

Episode 7 of User Not Found will delve further into Minjae and Yijoon’s relationship. We’ll be able to see a little mischief in their interaction. We will also hopefully find out who the person spying on Yeji and Sohyun’s conversation on the rooftop was. Tune in on Friday if you are just as curious!