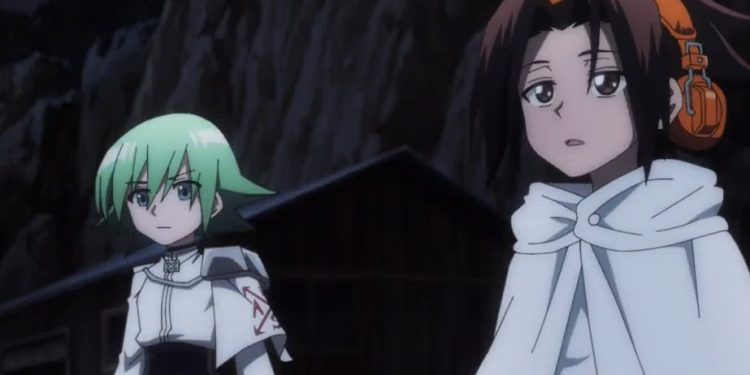 Shaman King (2021) Episode 40 reveals Team The Ren vs. Team Vadryra of Gandhara. The Shaman Fight continues since Asakura Yoh has decided to rejoin to defeat Lord Hao. Asakura Yoh heads out after having a family meeting with Anna. He met with Marco and proved that he had obtained new powers. He defeated the X-Laws robot using Over-Soul Spirit Sword. But the former member of X-Laws, the Luchist who wield Lucifer, arrives. Shaman King’s (2021) latest episode reveals Lucifer’s powers and Luchist vs. Marco. Luchist challenged Marco since the two were rivals.

He knows that if he eliminates the X-Laws, Lord Hao will win the Shaman Fight and become the Shaman King. Luchist battles with Marco, who shows new fighting techniques and dressing styles. Marco wears the mini pants, and the long pants only cover from legs to the near. But under his waist, we only see mini pants. Lyserg knows that Marco dresses like that when he fights until death. Lyserg asks Yoh if they should stop the two. But Yoh told Lyserg to relax since Luchist is preserving his mana for something. Lyserg realizes that Luchsit wants to kill Iron Maiden: Holy Girl Jean.

Asakura Yoh admits that, and Luchist confirms that if he eliminates Iron Maiden Jean there, X-Laws will be dead. Marco refuses to give up and trade massive strikes with Luchist. Asakura Yoh noticed that Marco was getting dominated, and they must help him. He told Lyserg that they had to step in and help Marco was in danger. Lyserg lost the courage to fight since Yoh had confirmed that Luchist was powerful enough to kill Iron Maiden Jean. Asakura hugged Lyserg and told him that they would work things out no matter what happened.

Asakura Yoh whispers something that made Lyserg accept joining the fight. Luchist uses Lucifer’s powers and defeats Marco. Marco bows and accept death, which makes Luchsit happy, and draws out his Spirit Pistol to finish Marco. But Asakura Yoh uses the Over-Soul Spirit sword to rescue Marco and punish Luchist. Luchist gets angry and wonders if Yoh wants to die. He told Yoh that it doesn’t matter if Yoh is Lord Hao’s brother and he will be doing Hao a favor by killing Yoh since it hurts to kill a brother.

Asakura Yoh accepts the challenge and uses Over Soul Spiri Oracles to slice Lucifer, who appears behind Yoh. Asakura Yoh wonders how Lucifer appeared behind him, and Lucifer lands a final blow to kill Yoh. But a fake Iron Maiden appears and protects Yoh. Luchist notices that Lyserg and Yoh have fooled him. Before they fight, Yoh tells Lyserg to use the fake Iron Maiden as bait to buy them time while they summon the real Iron Maiden. That plan worked well, and Luchist realized that he could do anything. He tries to use Lucifer to fight back, but real Iron Maiden Jean arrives. Jean slices Lucifer with a single slash.

Luchist loses his mana and falls unconscious. The Iron Maiden Jean went near the bench river and thing about something. Marco admits that he is a sinner and backstabber who deserve to die; he took a pistol trying to end his life. But Iron Maiden hugs him and convinces him to stick with the X-Laws since they are a team. Iron Maiden Jean thanked Yoh for helping them and told him to settle their grudges in the Shaman Fight. They both head home, and Anna wonders what happened since she saw new faces.

Shaman King (2021) Episode 40 will be released on 20 January 2022. Asakura Yoh makes Anna angry when he tells her that it is a long story. Jean has forgiven Luchist, who is now part of the family. The X-Laws have reunited and realized that they must make Hao pay for ruining their past. Asakura Yoh reveals how they will defeat Yoh by winning the Shaman Fight. Once Hao wins the Shaman Fight, they will attack him when entering a cleansing ceremony. Let’s look at Shaman King’s (2021) Episode 40 official details.

You can watch Shaman King (2021 Episode 40 online on Bilibili & Netflix on Thursday at 5:55 PM JST. Shaman King’s (2021) Episode 40 is also available on Youtube & Netflix for those in the UK. Anna reveals the next match, and Ren gets ready to face the enemies. The spectator announces that Team The Ren vs. Team Vadryra of Gandrahara has begun. Ren told Chocolove and Horohor to watch him singlehandedly take those guys, but they can join later. Let’s meet when Shaman King (2021) Episode 40 is released.

Also Read: In the Land of-Leadale-Episode 3: Will Cayna Revive A Merchant Kill By Ogres?.