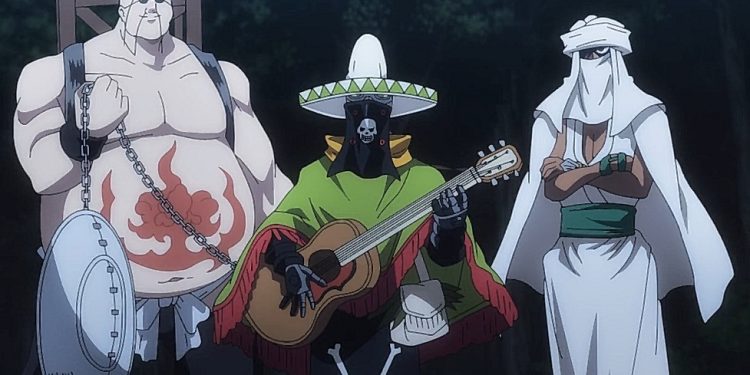 Shaman King (2021) Episode 38 reveals Team Yoh encountering Hao after they fought with Golem. Team Hao met with Asakura Yoh alone in the forest, but the other Shamans arrived since Hao was about to finish Yoh. Golem was shocked after learning that Hao could swallow 330000 Spiritual power in one go with a Mana of 1,24 million. Redseb realizes that his father is inside the Golem and wonder if he can see him. Horohoro realizes that Chocolove killed the father on the night of Christmas. Shaman King (2021) has delayed the upcoming episode. Asakura Yoh told Redseb that his father is an earth-bound spirit.

Peyote, Ching, and Mohamed are excited to settle the score with Team Yoh. They know they have an advantage since the Shamans from Yoh’s side are injured. But Yoh summons Over-Soul and uses it to enhance his gigantic blade. The blade flames red, and Hao notice that it is the Spirit of Sword. Team Yoh admits that they won’t hold back, and they can settle their grudges. Hao realizes that the Spirit Sword resembles Matamune’s and believes that Yoh learned it from Ogre Slayer, Matamune.

Asakura Yoh confesses that, and Hao feels hurt after looking at Yoh’s Over-Soul. He knows that Matamune was his best friend, and he looked up at the moon and saw the stars were clear. Hao leaves the battlefield because he believes that Shamans don’t fight when the stars are shining. Horohoro wonders if that made Hao leave, but he is relieved they won’t fight. Ren scolds Horohoro and says that Hao would have defeated him first if they had fought. Horohoro gets furious and thinks Ren is saying that he is a weakling. He wanted to make Ren eat his words.

The Golem decided to beat the Shamans as they protected Asakura Yoh. Golem had defeated Asakura Mikihisa before it met with Yoh, and he realizes that the Golem might have been causing chaos. In the past, he met with Camel Muntzer, Redseb’s father, who is controlling the Golem. They become best friends and head to the mountain camping together. During camping, Camel reminds Mikihisa to care for his kids and Golem. Mikihisa believed that Yoh and his friends would stop Golem in the present Era.

Golem blasts everything away, and the Shamans wake up after an explosion. Horohoro and Rin notice that Yoh and the others are missing. But Camel told them to fill the Golem’s mana with Souls. Lyserg arrives with the X-Laws robot and takes Team Yoh away. Lyserg told them there was no need to fight with Golem since Redseb’s sister was not with them. Horohoro asks them what they must do. Lyserg suggests escaping, while in the forest, Anna is with Manta telling him why his name resembles Matamune.

She also told him about the Demon that hurt Yoh in the past. But she has found the find key to take Hao down. Horophoro reminds the team that Golem is behind them. They ask each other how to deal with Golem, and Rebseb thinks it is his fault, and Ren tells him to get brave. Horohoro can’t believe that Ren has to cold to a kid. The Golem has stoped attacking since Redseb is with them. Redseb decided to stop his father so he could stop Golem. Ren reminds Lyserg of their plan and that he will be a bait to save everyone. Redseb tried to convince his father, but they couldn’t hear each other. Camel reveals that he is the future Shaman King.

Shaman King-(2021) Episode 38 will be released on 6 January 2022. Chocolove arrives to stop Golem; even those he cannot rub his crime, he can sacrifice his life to stop Golem. Chocolove releases Over-Soul Mic in Jaguars with Doble Over-Soul Jaguarman. Jaguarman unleashes Explosive Beast Spin: Jaguar Slice and cuts Golem, who revive. Golem and Chocolove had an intense battle, and the Shamans were impressed, but Anna ruined the moment and arrived while defeating Golem with a single strike. Let’s look at Shaman King’s (2021) Episode 38 official details.

Also Read: Will Class 1-A Find League of Villains & the Liberation Army In My Hero Academia Chapter 340?.