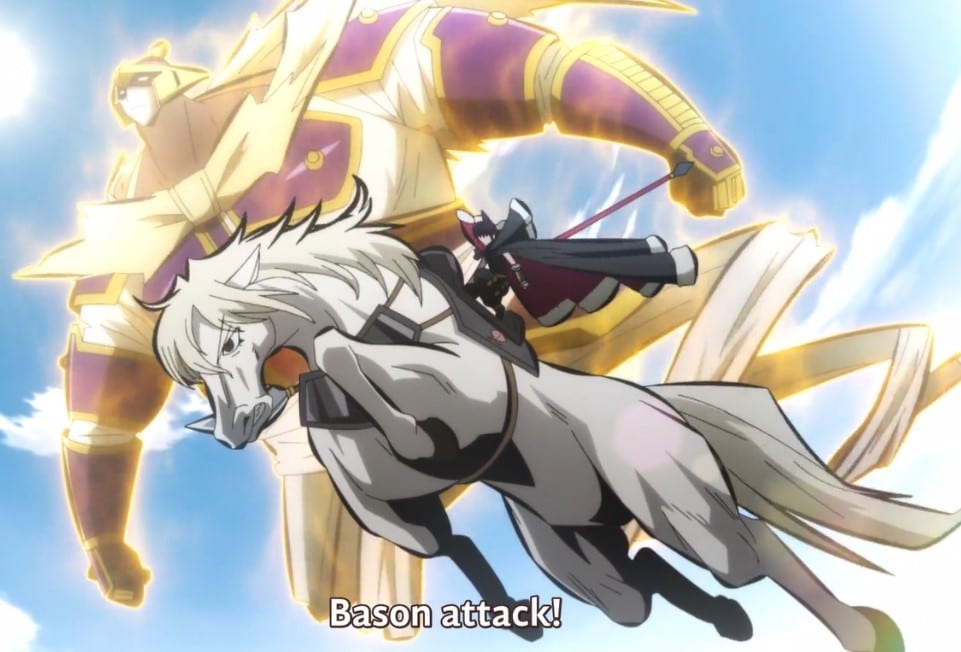 The war that will determine that future Shaman King has begun. Shaman King (2021) is on its halfway to conclude episode finale. Let’s find out who will become the new Shaman King after the Shaman Fights completes. The rival war between Yoh and Ren continues, but Ren finds it hard to accept defeat along with his Ghost Bason. The reveal friends end up teaming up and stay in the same hotel with the other fighters. The Great Spirit Lady knows that there will be a rise of a new Shaman King that will terrorize the Shamans, and they need to find a suitable Shaman to face that King and dethrone him.

Ren arrived at the castle and told Bason that they would bust through ”them.” With the help of Bason’s powers, Ren unleashes Bason Blade and orders Bason to integrate into Bason Blade. The army of Jiang Si appears in front of Baso and Ren with explosive tags on their forehead. Ren unleashes ”Over Soul Super No-Nonsense Mode” and smashes the Jiang Si army. Bason entered into a new form, and Ren flies with his horse as they smack the army. The episode title is ”Two Men.”

The duo begins to slash the enemies using Bason Blade. Bason is hammering the enemies with his fists while Ren uses the Blade to behead them. Ren smile and comments the Jiang Si army is a child’s play and wonders what his father thinks when he brought these weaklings. Ren made his way to the castle and commented that his father hadn’t seen him ever since he has powered up. Ren’s father, Tao En, surprised Ren by appearing in front of him.

Tao En welcomes Ren while saying he wants to pat his son on the head. Tao En clicks his fingers ad blow Ren along with Bason away. Ren thought he is strong enough to survive a single welcoming blow from his father, but his calculations were wrong. Fortunately, Bason shielded Ren when they bang with mountains. Ren gets ups and comments that was rough welcome. Ren wonders why he couldn’t see his father when he appears in front of him. Tao En told Ren that he is still a cute child and must accept his father’s love.

Ren calls his father by name, and En told Ren to call him papal, and it is an excellent welcome from papa. En told Ren to be happy since he has prepared a particular welcome party for him, but Ren destroyed the Jiang Si army with ease. Ren heard his father talking about Juan and wonders what did his father do to Juan. En comments that he never thought all of his children would go against them. Ren questions his father, and he replies that he give Juan discipline after she ide with the enemy, Asakura Yoh.

Ene reveals that Juan knew that she would get punished, and she pulled a foolish move. Ren wonders if his sister Juan is still alive. En clicked his fingers, and the guards show Ren a corpse cover with a veil. Ren got furious, thinking that it is Juan’s corpse. But En removes the veil, and Ren finds that his father Pyron after a fierce battle.

En reveals that Paryon blocked the killer blow that was meant for Juan and paid the price of his life. Ren realizes that it would have been Juan’s corpse instead of Pyron. En comments that the To family doctrine says one must never doubt. The average man is weak because he hesitates and thinks before choosing what is wrong and right. En told his son there is one truth, the victor is righteousness, and the loser is wicked. Therefore, until the glory of the Tao gets restored and they are righteous again, no one goes against the head of the Tao family.

The guard brought a chained Juan, and En comments that Juan brought a curse to them. En reveals that Jun has accepted her punishment. Ren realizes that he befriends Asakura Yoh before his arrival here. En told Ren if Ren tries to rescue Jun, he will get punished. Ren replies that he will defeat his father, and he will be the righteous one. Ren attacks En with Super Golden Chines Slash Dance. En smiles and wonders what this kid is trying to do.

A chained Juan shouts at Ren that he has no match against his father. En blocks Ren’s attack using his bare belly, and Ren received a colossal slap that puts him to sleep. On the other side, Yoh, Horohoro, Anna, Manta, and Ryu felt slap power. They wonder where that power is coming from. Bason teleports and reports to Yoh that Ren receives punishment from his father. Yoh heads there and finds that Ren got brutally beaten. Ren got locked inside the prison, and the two works on their way out.

Also, read One Piece 1016 Spoilers: Is This The New Strawhat Member?