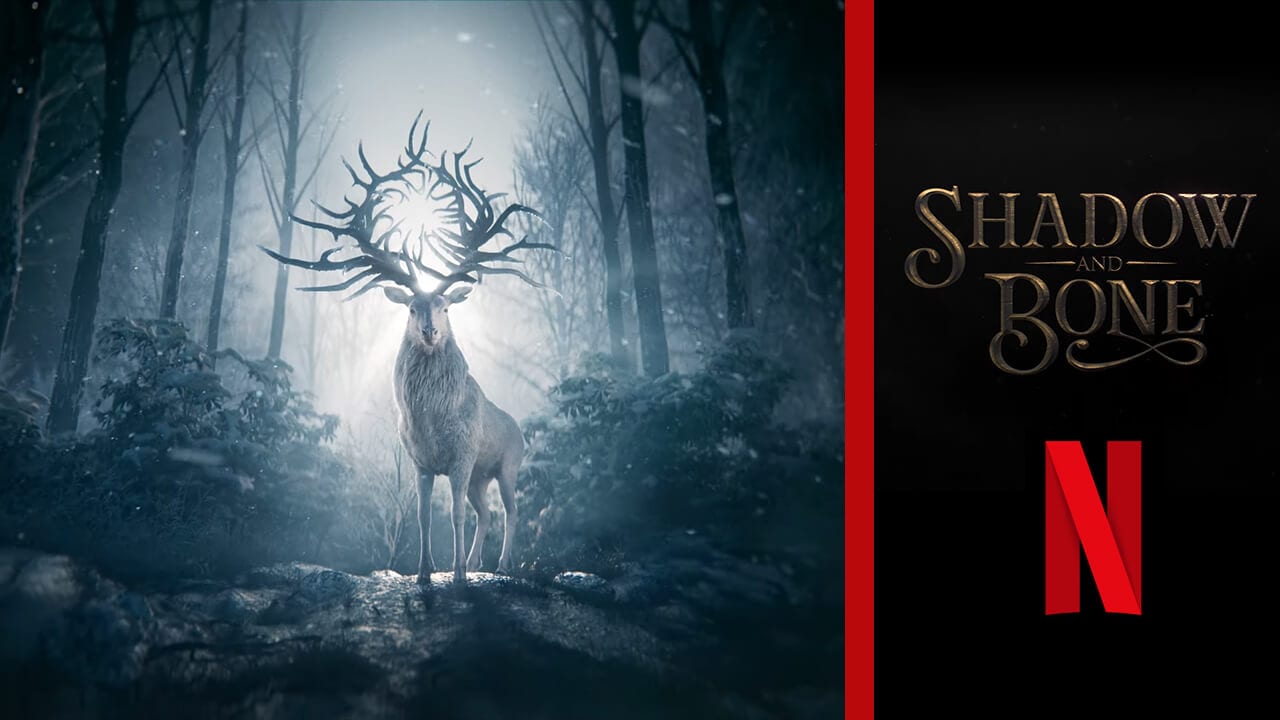 Shadow and Bone is the latest fantasy epic to come out of Netflix’s arsenal. Hitting the streaming platform on April 23, 2021, the show has generated significant buzz. A big reason for the excitement is the fandom it already has, courtesy of the book the show’s based on. It’s based on the Grisha novel trilogy by Leigh Bardugo. The first entry of the trilogy is called Shadow and Bone. It’s also based on the Six of Crows duology by the same author. It stars Jessie Mei Li, Archie Renaux, Freddy Carter, Amita Suman, Kit Young, Ben Barnes, and Zoë Wanamaker. Joseph Trapanese has composed the music for the show. There are a total of 8 episodes in what is hopefully the first of many seasons. Each episode is about 45-58 minutes long. Eric Heisser has developed the show while David Lanzenberg, Owen McPolin, and Aaron Morton handle the cinematography.

The fantasy epic has all the characters from the Shadow and Bone trilogy, plus the Six of Crows. And that’s also one of the reasons for the hype behind the show. The characters from the Six of Crows duology are favorites of many readers. And now that show’s out, that liking has translated well for the live-action versions. There are quite a few changes from the books. One of them is the amalgamation of the two novel series. Another one is that the lead character of Alina Starkov (played by Jessie Mei Li). She’s a mixed-race character in the show, which was not the case in the books. She’s a half-Shu and half-Ravkan in the show, contributing to the racism she faces by Ravkans. 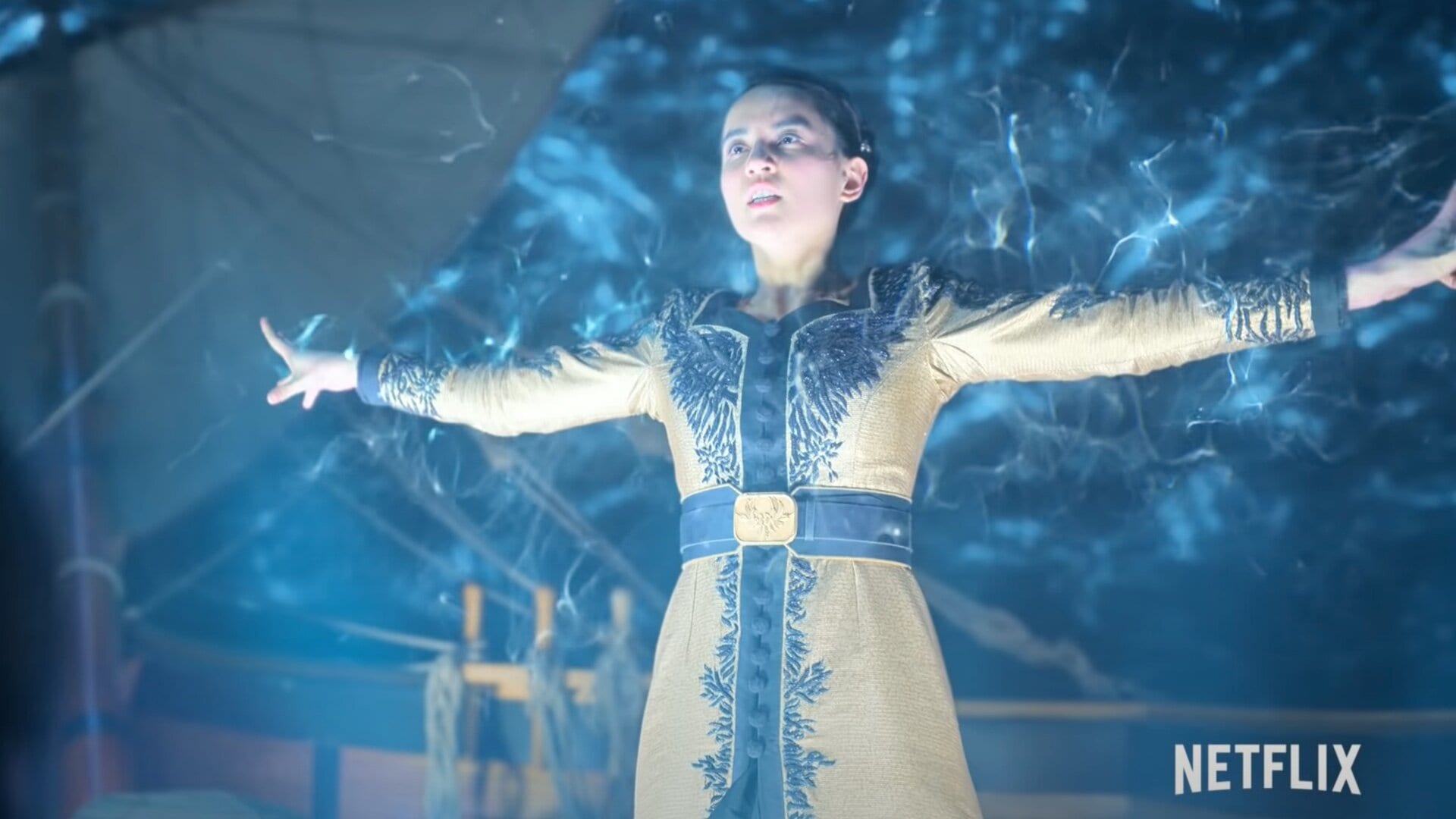 Jessie Mei Li stars as Alina Starkov, an orphan growing up who later becomes a part of the Ravkan army. She is a former assistant cartographer of the Royal Corps of Surveyors in the First Army. She’s also the legendary Sun Summoner of the prophecy, a Grisha that can summon the sun. Archie Renaux stars as Malyen “Mal” Oretsev, Alina’s childhood best friend. He’s also an exceptional tracker in the First Army. Freddy Carter plays one of the Crows, as Kaz Brekker. He’s the leader of the Dregs, also known as Dirtyhands. Amita Suman plays Inej Ghafa, another member of the Dregs, also known as the Wraith. Kit Young plays Jesper Fahey, the third member of the Dregs. He’s an exceptionally skilled sharpshooter. Ben Barnes stars as the antagonist General Kirigan/Alexander/The Darkling. He’s the general of the Second Army and the Shadow Summoner. 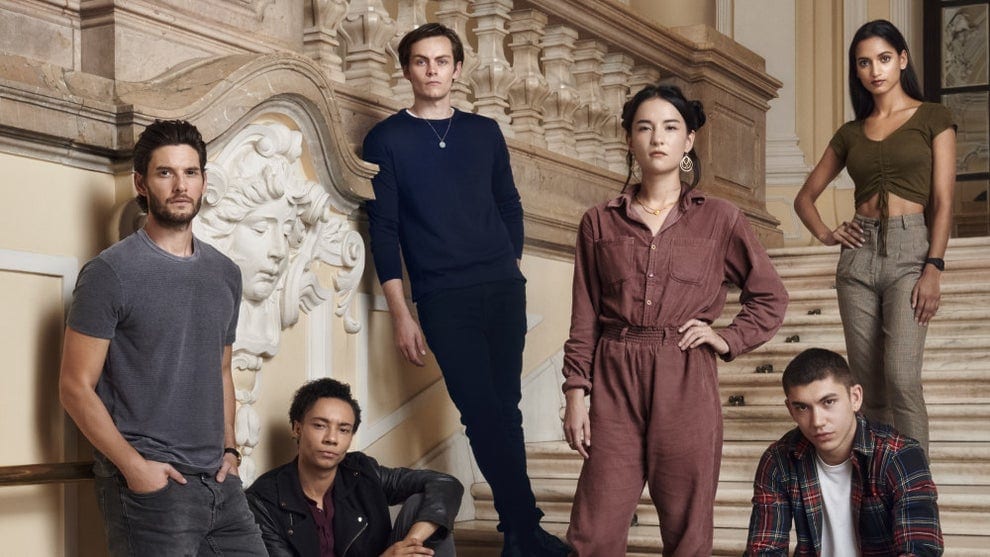 Shadow and Bone is a fantasy epic adaption of the novel trilogy of the same name by Leigh Bardugo. It also adds the characters from the Six of Crows duology by the same author, based in the same universe. The show has all the elements of a promising fantasy epic. Netflix has done a great job with big-budget projects like Stranger Things and The Witcher. And Shadow and Bone seem to be a new addition to that successful top hitters. There’s the underdog who is the chosen one, there’s an adventure, and there’s also a healthy dose of monsters. The story is set in the late 1800s type fantasy world. There are three major countries in the show so far — Ravka, Fjerda, and Shu. Ravka is like a Czar-era Russia.

Alina grew up as an orphan in an orphanage in Keramzin. Her parents, as told by the orphanage headmistress, were killed by Volcra, creatures in the Fold. The Fold is a magical strip of darkness that divides the kingdom of Ravka. The region houses horrific creatures called Volcra. It’s very difficult to cross the Fold and also to circumnavigate it. In the present day, Alina is a cartographer for the First Army of Ravka. At the camps, she reunites with Mal, her childhood best friend at the orphanage. They both are thrilled to see one another as they talk about their childhood. However, Mal is soon enrolled in the mission of crossing the Fold. This makes Alina terrified since crossing the Fold is almost a death guarantee. 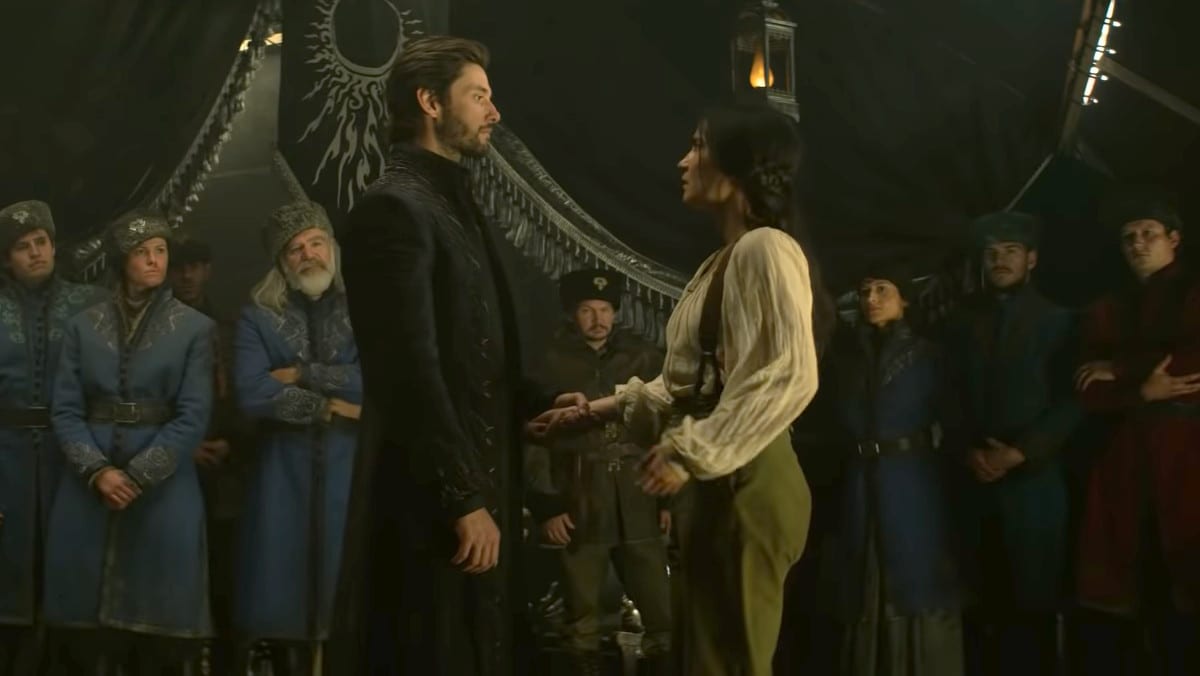 Sun Summoner and the Crows

Alina burns the maps so that the mission would have to enroll her since she’s a cartographer. She boards the skiff that’s going to cross the Fold. Inside the Fold, the Volcras attack, and when one of them attacks Mal, mysterious energy emanates from Alina. We learn that Alina is the prophesied Sun Summoner, a Grisha that’s going to destroy the Fold. But no such summoner existed in the world until Alina. General Kirigan tests her, realizes that she’s indeed a Sun Summoner, and then takes her to the king. There, he presents her powers to the king and asks her to let her stay with him as he trains her. Meanwhile, in Ketterdam (West Ravka), we meet the Crows. Kaz Brekker, the leader of the Dregs, takes a job for one million kruge.

Their gang includes Kaz, the Dirtyhands; Inej, the Wraith; and Jesper, the skilled sharpshooter. They embark on the mission to cross the Fold and bring the Sun Summoner to Dreesan. Kaz takes up the job for the money and also to free Inej from her indentured servitude. Their ways are going to inevitably cross with Alina and Mal’s. As Alina starts training at the palace, she starts getting used to the new lifestyle. There’s also a short relationship between Kirigan and Alina before she discovers his true identity. It turns out, Kirigan is the “Black Heretic” of the stories which created the Fold. He plans to use Alina to create an Invincible army and take revenge on the whole world. His motivations are the discrimination and atrocity he and his kind have faced for so long for being Grisha. 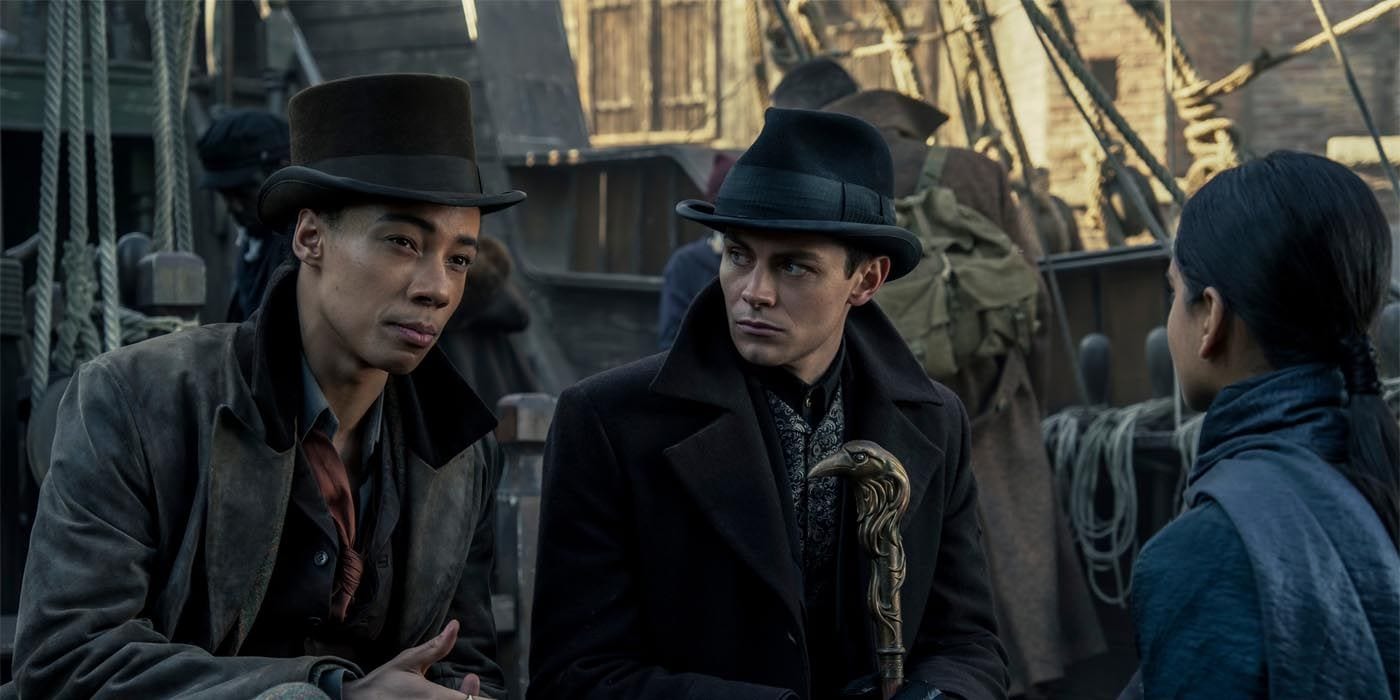 The End of Season 1

From thereon, the several storylines move forward, to ultimately coverage at Alina Starkov. Kirigan wants Alina on his side, not because he recognizes her powers and capabilities, but because he wants her powers. As she realizes his true self, Alina also embraces her powers and eventually defeats him, together with Mal and the Crows. The show ends with Alina and Mal going away from the Fold, making their identities, as Mal says, “ghosts.” Meanwhile, Kaz and the company also get a meaty prize from Alina in the form of a necklace that she stole. Kaz has now given up on kidnapping the Sun Summoner, and he, Inej, and Jesper return to the barrel. They’d have to come up with a plan to confront Dreesan and Pekka. Finally, we see that Kirigan is not dead and instead has learned how to control the Volcra creatures.

Shadow and Bone is a Promising Start for an Epic Fantasy

Shadow and Bone is a fine piece of a fantasy epic. The show also serves as a commentary on discrimination and racism in the real world. The Fold is a metaphor for the divide we have created because of the darkness inside us. Both Kirigan and Alina have faced discrimination in their lives. But it’s Alina who wants to tear down that darkness while Kirigan wants to weaponize it to take revenge. One of the best aspects of the first season was the characters. And the biggest reason for that is the perfect casting for the roles. I haven’t read the books but judging by the show alone, these actors seem like perfect choices for the roles. Volcra is creatures of darkness residing inside the Fold.

Although all characters are great, it’s the Crows that were by far my favorite. Their story is much more exciting and happening than the main one here. Kaz, Jesper, and Inej now have superpowers and yet get the work done through sheer abilities and cunning. The relationship between Kaz and Inej was honestly better than that between Alina and Mal or Alina and Kirigan. But maybe the best one by far was the love between Nina and Matthias. The supporting cast has also done well too, with Sujaya and Daisy doing a great job. The CGI is also good and delivers on the expected quality from Netflix.

With great characters and an even greater cast, Netflix’s Shadow and Bone is a promising fantasy epic. The first season is a great start to the wondrous journey that awaits us, and we’re here for it. Our rating for Shadow and Bone season 1 is a 4 out of 5.