Jae Gyung and Sang Hyuk are going to regret everything very soon! 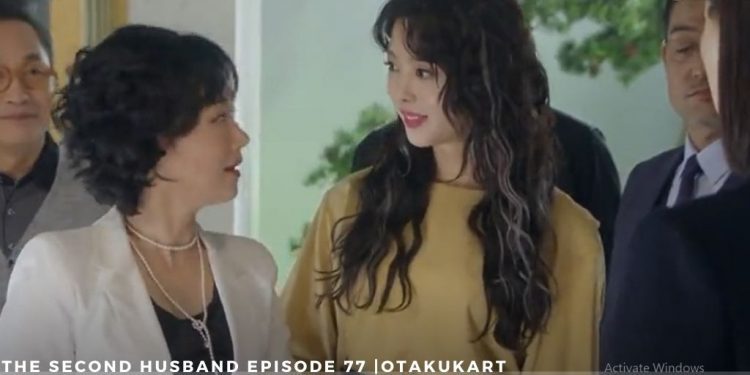 Fans are more than ready to watch The Second Husband Episode 77! Going back to the latest episode, fans’ worries were cleared in the first ten minutes itself. Although along with the audience Jae Min and Seon Hwa got worried when Sharon’s fake mother recognized Jae Kyung, things did not go out of track thanks to their quick thinking.

Later on, the woman explained that she and Jae Kyung back when she worked in a cafe in the US. The woman remembered the meeting clearly because Jae Kyung threw hot coffee on her that has left a scar on her arm. The audience wasn’t at all surprised by finding out that Jae Kyung didn’t even treat this woman properly. But besides that everything has been going on perfectly!

Jae Min’s parents were incredibly impressed by Sharon’s family’s wealth. They even got more flattered when Sharon’s family brought expensive gifts for them. Also, fans experienced happiness seeing Jae Kyung suffer. Jae Kyung keeps getting angry by just looking at Sharon. She even asked Jae Min if he wasn’t going to settle on another house after his marriage. Fans git even happier when Jae Min said that if she doesn’t want to live in the same house as Sharon she better move out.

The audience can’t wait to see more moments of Seon Hwa giving Jae Kyung the taste of her own medicine. In this article, we will be filling you in with all about the release date to the predictions for The Second Husband E[isode 77.

The audience has been having a blast watching The Second Husband. Each episode makes the audience more curious about what Seon Hwa will be planning next. And now that Jae Min and Seon Hwa have finally gotten married, things have gotten more thrilling. So there is no wonder why people have been waiting impatiently for each episode to air. The Second Husband Episode 77 is going to air on December 6.

The Second Husband has been garnering a lot of Korean audiences recently. This is evident as the kdrama has seen a significant rise in its nationwide viewership ratings. But is there anything not to love about the kdrama? It has an amazing cast, an interesting storyline, and beautiful music. So it must be one of the best daily dramas out there.

Where To Watch The Second Husband Ep 77?

As already mentioned, the Korean audience has started to give the k-series the recognition it deserves. Now many households in Korea have been tuning in on MBC Mon-Fri at 7:15 PM. Ever since the kdrama premiered its first episode, the kdrama had already started to get popularity outside of Korea. The international audience has been watching the episodes of The Second Husband on streaming sites like Rakuten Viki and Kocowa.

It looks like that the upcoming episodes will be full of pleasant surprises. In the preview for the upcoming episode, Seon Hwa and her friends found out where Sang Hyuk and Jae Kyung had been hiding all of their savings. And now that she has found out about it, Seon Hwa will surely not rest in peace. She and her trustworthy friends have formed a plan to rob Jae Kyung and Sang Hyuk of all their riches. All that fans hope is that she won’t get caught. It is quite a risky plan but the audience knows that her friends must have come up with a foolproof plan.

Moreover, it will definitely irritate Jae Kyung even more than before. As the audience had expected, Sharon has been giving Jae Kyung a hard time. It appears as if the audience has been enjoying the revenue part of the kdrama than Seon Hwa herself!

Also read: Snowdrop Update: Cast Of The Kdrama Gives Insight Into Their Characters