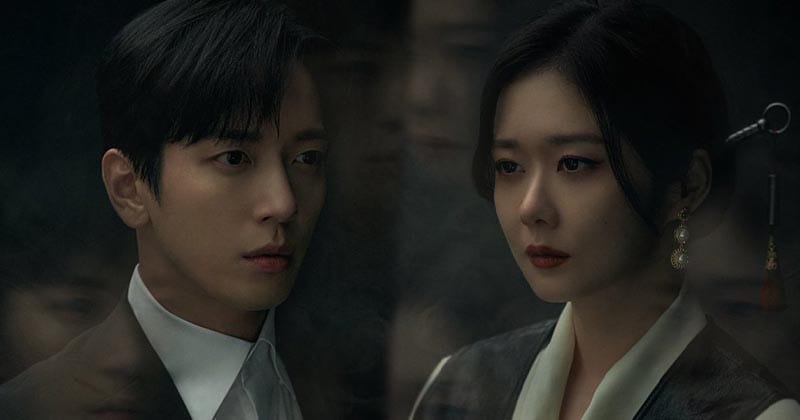 Sell Your Haunted House or 대박부동산 has won all our hearts. The drama just aired episode 10, and fans are in awe of the actors and the storyline. Since the last episode, everyone has only one question: When will Hong Ji Ah and Oh In Beom make up? Looks like they will make up in the 10th episode of Sell Your Haunted House.

Ever since Hong Ji Ah discovered that Oh In Beom and his uncle were her mother’s last clients, she refuses to talk to Oh In Beom and even broke their contract. Although she has fired him, we definitely see her missing him. Moreover, even Oh In Beom is investigating more into his uncle’s death as there are too many unanswered questions. Fans are excited and even nervous to know if the tenth episode will be answering the mystery surrounding Hong Mi-Jin and Oh Sung Sik’s deaths. In the preview, we saw that Oh In Beom asking someone the truth no matter how gruesome it is.

Another thing that has fans itching their heads is Manager Joo Hwa Jung’s mysterious nature. What is she hiding, and what does she know? Moreover, the suspicions towards her are at their peak as even after knowing about Oh In Beom’s past she does not inform Hong Ji Ah. In this article, we will take you through episode 10 of Sell Your Haunted House.

The episode starts with Hong Ji Ah throwing Oh In Beom down to the floor and then treating him to dinner. Nothing different from their usual banter. Oh In Beom gives the necklace that protects him from spirits to Hong Ji Ah. Moreover, he thanks her and tells her that he thought his uncle gave it to him, but it might have been her mom. Hong Ji Ah returns the necklace and tells him to lead an ordinary life while being protected y it. 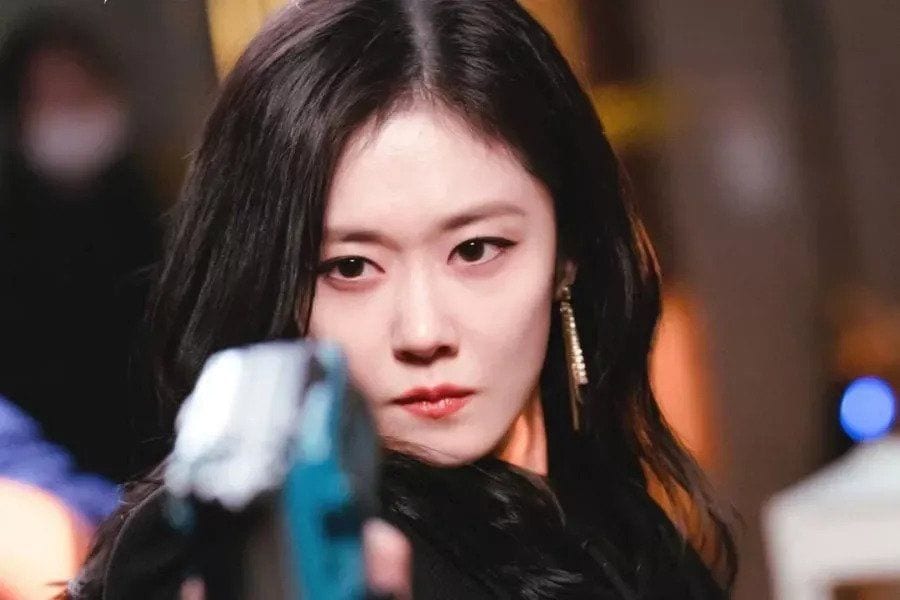 After the terrible accident, Soo Jung is reasonably shocked and scared. She begs Hong Ji Ah to let her stay the night. Hong Ji Ah tries to persuade Manger Hwa Jung to take her as she does not like spending time with people. Manager Hwa Jung refuses. This leads to an awkward Hong Ji Ah having a drink with Soo Jung. Moreover, Soo Jung confesses that she actually saw the woman’s eyes, and it seemed like they were crying for help.

She said that she is scared that the spirit of that woman will not leave her alone. This angers Hong Ji Ah and she reveals to Soo Jung, that the only reason the spirit came back was to protect her from that stalker and not hurt her. Further, that woman actually got on the lift just to save her. Why would a woman who died saving you want to hurt you? Hong Ji Ah questions. Hong Ji Ah tells Soo Jung that Lee Hyun Ju was that woman’s name and she should remember it. While telling her about Lee Hyun Ju, who was an actress for 12 years and was trying to make ends meet, Ji Ah gets teary-eyed. Hong Ji Ah asks Soo Jung to live her life to the fullest for the sake of Lee Hyun Ju who died saving her.

Plan To Catch The Murderer

Soo Jung asks Hong Ji Ah to catch the murderer. The team decides to use Soo Jung as bait although Ji Cheol is skeptical. Moreover, this is the first time Hong Ji Ah gets involved for the first time after performing an exorcism. Just as planned, the murderer follows Soo Jung when she passes by. He enters into her apartment, where the rest are carefully hiding.

The wicked stalker named Ma Kwang Tae tries to force himself on Soo Jung. Hong Ji Ah barges in but he hurts her with a knife. Oh In Beom, who was watching the CCTV footage joins in on a chase that ensues to catch the murderer. Unfortunately, he gets hit by a truck while running and turns into a spirit. Hong Ji Ah tells Oh In Beom to take off his necklace so the spirit can enter. A touching moment during this chaos is when Ma Kwang Tae who has control over In Beom’s body tries to stab Hong Ji Ah but In Beom’s self-control protects her. Hong Ji Ah’s gets rid of the spirit by stabbing Oh In Beom.

A Peak into Manager Joo Hwa Jung’s Past 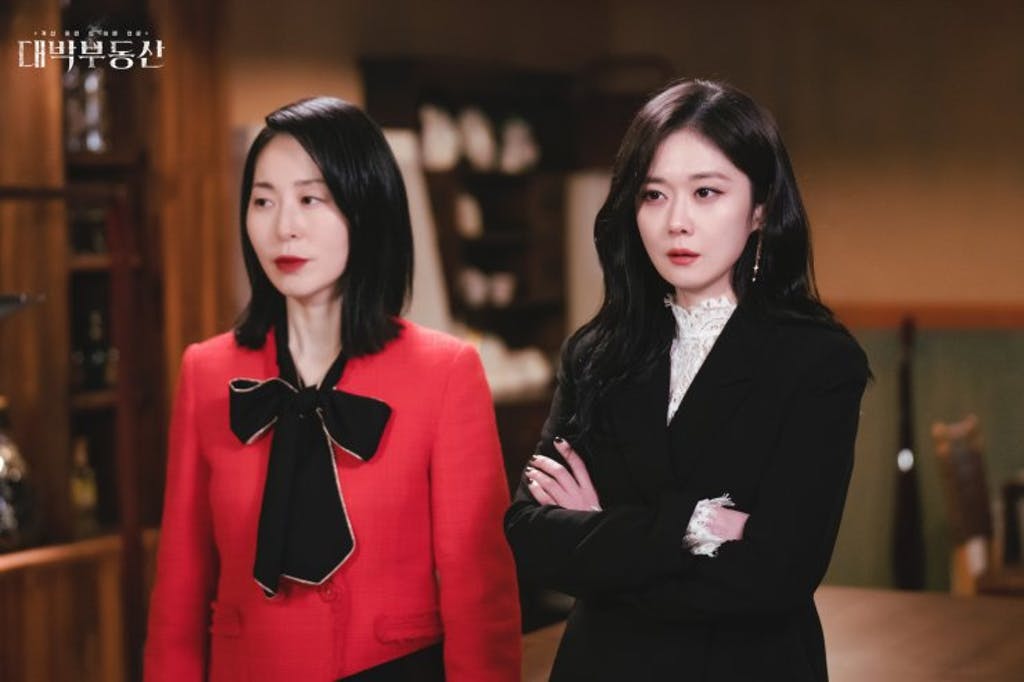 Detective Kang shows up again at Daebak Real Estate to update them on the case. Moreover, he was confused after the events that unfolded earlier. Detective Kang seems stunned by the fact that the exorcist can actually absorb the memory of the dead. The scene shifts back to when Manager Hwa Jung was younger as she tells Detective Kang that she did not want the kids to become a burden. This leads Detective Kang to ask if he was unaware of something back them. ‘ There is a karmic connection to everything’ Manager Hwa Jung replies.

Furthermore, we see that Hong Ji Ah has decided to perform an exorcism on Oh Sung Sik’s spirit. Manager Hwa Jung tries desperately to stop her but to no avail. Oh Sung Sik, In Beom’s uncle lives as an unrested spirit, and In Beom does not know that. Hong Ji Ah got inspired by Bae Soo Jung. How the 20-year-old girl risked her life to catch a murderer gave her the strength to let her mother go. Moreover, Manager Hwa Jung lays down the condition that if she wants to perform an exorcism on Oh Sung Sik, she needs to fire her first. What’s troubling her more is if she should tell In Beom or not.

As Soo Jung is preparing for the police academy, Ji Cheol can’t hold back his tears. Hong Ji Ah asks In Beom to have a meal with her. Oh In Beom thinks it’s a date and gets all pretty in white. Little does he know, Hong Ji Ah is about to tell him that his uncle is an unrested spirit. Oh In Beom does not believe her at first, but it slowly starts to sink in. Furthermore, Hong Ji Ah tells him to stay out of this exorcism as he will not be able to get over the memories. Oh In Beom ensures says that he wants to know the whole truth even if it’s gruesome. He ensures her that he is a special psychic and tells her not to worry.

Oh In Beom Is Back To Scamming 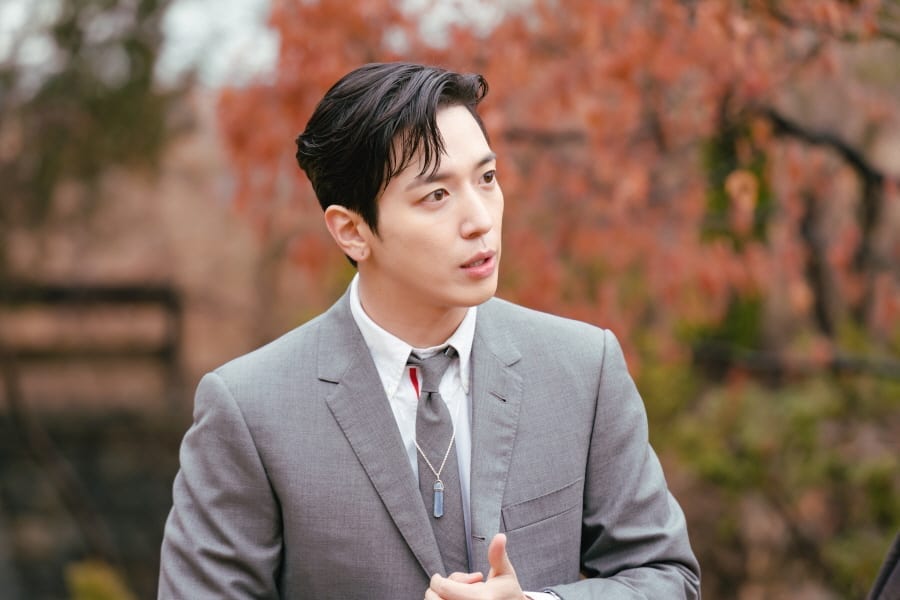 Do Hak Seong, who is the chairman of Dohak construction is required for exorcism. Oh In Beom decides to scam him to make sure that he is present. He goes to meet the Chairman and sets up hidden cameras everywhere. Sadly, he is not able to get the chairman to confess. Hong Ji Ah gets a call from Do Hak Construction to meet them. There seems to be something suspicious about the meeting. When Hong Ji Ah enters the meeting room she spots a spirit.

Oh In Beom and Hong Ji Ah are trapped in the cold warehouse. The Chairman and Manager Jo are having a tense conversation. He questions Manager Jo as to what her intentions are. Chairman Do Hak Seong has planned an attack on Manager Joo. A bunch of wood falls on  Manager Joo from a crane. Hong Ji Ah and Oh In Beom are saved by Hong Ji Ah’s mother as they are on the brink of death.

This episode definitely was a high ride. It left us on a cliffhanger. How did Hong Ji Ah’s mother show up? Will Manager Joo die? What will happen when Oh Sung Sik is exorcised.