Like the saying goes, five is better than four! 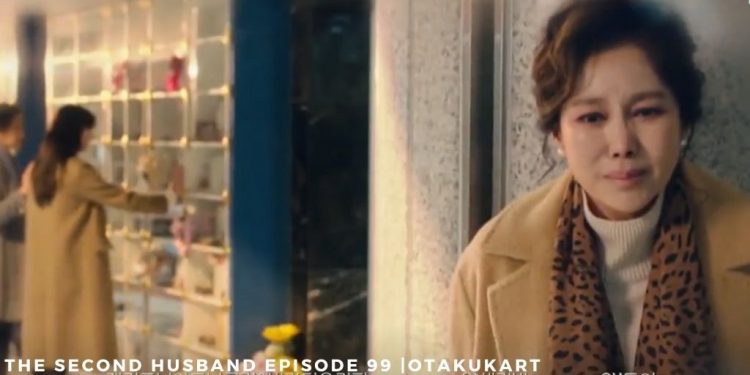 The Second Husband Episode 99 is just around the corner! Now that a new chapter of Seon Hwa’s life has opened, fans can’t help but get excited. At last, the mother and daughter duo are joining hands to take down Jae Kyung and Sang Hyuk for once and for all. But before all of this, Hae Ran couldn’t accept the fact that Seon Hwa is her daughter. She went to the nun that she and Seon Hwa are aquatinted with. Hae Ran gave the nun a photo of Seon Hwa’s grandmother and asked her how she is. After getting her answer, she got out of the cafe and coincidentally saw Seon Hwa and her ex-convict friend Geum Deok. And when she followed them, she saw that Seon Hwa was going to meet her grandmother. The words that Seon Hwa uttered next brought tears to Hae Ran’s eyes.

Finally, she accepted that her daughter is Bong Seon Hwa. As she saw Sharon’s photo frame in her house, she couldn’t help but cry about what had happened. All of the rude things she had said and done to Seon Hwa all flashed in front of her eyes. And then she realized that all of the accusations that Seon Hwa had thrown at Jae Kyung and Snag Hyuk were actually true. In an instant she had called for Jae Min and had asked him more about Seon Hwa, and what had happened to her. Now, Hae Ran knows everything that had happened to Seon Hwa and is totally ready to help Seon Hwa with her revenue. To see how Hae Ran is going to help Seon Hwa, check out the release date, streaming details, and predictions for Episode 99 of The Second Husband.

There is no doubt that fans have been impatient for The Second Husband Episode 99. Hae Ran had been bawling her eyes out when she found at last that Seon Hwa is her daughter. She had regretted her actions to Seon Hwa so much that she had decided to give Seon Hwa all of her shares. Also, in the preview, she could be seen apologizing to Seon Hwa face to face. Is this where she tells Seon Hwa that she is her mother? Or do the audience have to wait longer for that?

If all of this wasn’t enough, Hae Ran has decided t start her fight with the J Capital. Looks like there is no backing down for this mother. The audience can’t wait to see what Hae Ran is going to do for the sake of her daughter. Plus, they would also like to see her start her own revenge plan against Yoon Dae Guk.

The release date of The Second Husband Episode 99 is January 5, this Wednesday. The audience has totally fallen in love with the characters of The Second Husband and the whole story itself. The side plot of Seo Jun and Sang Mi’s love for him, adds the extra spice to the recent episodes. The cast of the kdrama including Uhm Hyun Kyung, Cha Seo Won, Han Ki Woong, and Oh Seung Ah, has done total justice to the daily drama. The actors of the K-series had bagged two awards both of which were Excellence Awards For The Best Actor/ Actress In A Daily Drama in 2021’s MBC Awards. To sum it up, if you are missing out on this kdrama, you are doing something really foolish.

Where To Watch The Second Husband Ep 99?

The Korean audience of the kdrama can watch the episodes straight on their TV screen. The kdrama’s broadcasting channel MBC airs new episodes of The Second Husband Mon-Fri at 7:15 PM KST. In addition to that, the international viewers can watch Episode 99 of The Second Husband either on Rakuten Viki or Kocowa. To access the services of these amazing streaming websites you would need to subscribe first. Other than the, the release time of the 99th episode of The Second Husband is 10:15 AM in the UK, 3:45 PM in India, and 8:45 PM in Australia.

Also read: Top 8 Spectacular IU Kdramas That Prove That She Is A Talented Queen