"SEAL Team" Season 4 Episode 8 is coming out soon and here's all you need to know.

“SEAL Team”, the American military action-drama series that returned with its fourth season last year in December and is soon going to release its 8th episode. Created by Benjamin Cavell, the series made its debut on CBS on 27th September 2017. It received mixed reviews, but the viewers started feeling in love with it gradually. Consequently, CBS renewed it for another season in March 2018. Then, CBS aired the second season on 3 October 2018, which was also loved by the audience. Finally, in May 2020, the channel production renewed the series for a fourth season. This 4th season premiered on 2nd December, making a return after almost 6 months. Anyhow, let us dive further into the article to learn everything there is to know about the show.

Just finished all 3 seasons of Seal Team finally after being behind. Can't wait for season 4! https://t.co/IknM1vLZog

Super excited for SEAL TEAM season 4 premiere on November 25th, directed by none other than our David Boreanaz!🇺🇸 https://t.co/SKiQWriYLp

“SEAL Team” is a military action drama series created by Benjamin Cavell. It revolves around a sub-unit of the US Naval Special Warfare Department namely, ‘Bravo’. It is the most elite unit of the Navy SEALs. They ploy and take on dangerous missions over the world with little notice, along with the burden on them and their families. Todd Louis, Kate DiMento, David Boreanaz, and Chris Leanza are the producers of the show, with CBS Media Ventures being the sole distributors. Anyhow, let us now have a look at the cast of the series that consists of some really talented and experienced artists. 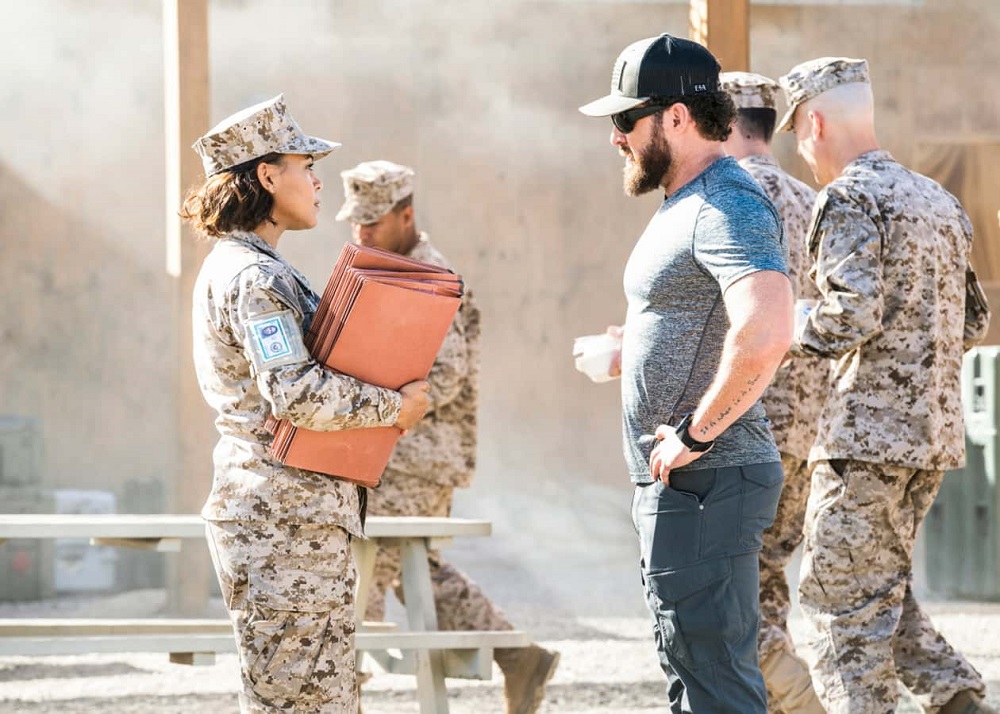 A still from the season finale i.e. Season 3 Episode 20 of “SEAL Team”.

David Boreanaz as Master Chief Special Warfare Operator: David Boreanaz is an American actor, director, and TV producer. Some of his best works include “Buffy the Vampire Slayer”, “Bones”, and “Angel”.

Max Thieriot as Special Warfare Operator Second Class Clay Spenser: Max Thieriot is an American director and actor who is popular for playing the character of Dylan Massett in the series “Bates Motel”. Some of his other works include “Jumper”, “My Soul to Take”, and “Disconnect”. A still of the entire main cast for Season 4 of “SEAL Team”.

Neil Brown Jr. as Chief Warrant Officer 2 Raymond “Ray” Perry: Neil Brown Jr. is an American actor. He has been a part of many famous movies and TV shows like “City of Lies”, “America’s Most Wanted”, and “Suits”.

A. J. Buckley as Special Warfare Operator First Class Sonny Quinn: A.J. Buckley is a Canadian-Irish actor. He is best known for doing films and series like “The Box”, “Murder in the First”, and “Pure”.

Toni Trucks as Ensign Lisa Davis: Toni Trucks is an American television, theatre, and film actress. People know her very well from her movies and shows like “Veronica Mars”, “What If…”, and “Barbershop”.

Judd Lormand as Lieutenant Commander Eric Blackburn: Judd Lormand is an American actor best known for his character from the movie “Carter & June”. Some of his other works include “American Heist”, “Pitch Perfect”, and “Miracles from Heaven”. A still from the upcoming episode i.e. Season 4 Episode 8 of “SEAL Team”.

What to expect from the upcoming episode of Season 4 of “SEAL Team”?

The title for Episode 8 of “SEAL Team” Season 4 is “Cover for Action”. In this episode, we will get to see Jason returning to Bravo. However, due to this, the tension rises as Ray outranks him on a mission. The mission was of recovering military drones in Syria. Apart from this, Sonny will receive a piece of astonishing news from Texas. Anyhow, there is lots of excitement entering this episode. The sole reason being that it will be thrilling to see Jason Hayes back at work. TV Promos has already released a trailer for the upcoming episode on their official YouTube channel. It has already crossed 54k views, and you can watch it below.

SEAL Team Season 4 Episode 8 is going to release on 3rd March 2021 at 9 PM ET. You can tune in to CBS to watch the episode at the same time. However, if you are unable to watch the episode at that time, you can stream it later on the official website of CBS. So, brace yourselves as the SEAL Team is returning to your TV screens this week. Until then, let us know in the comments section how excited you are for the upcoming episode. Also, tell us how will Jason’s day back at work be with the team.