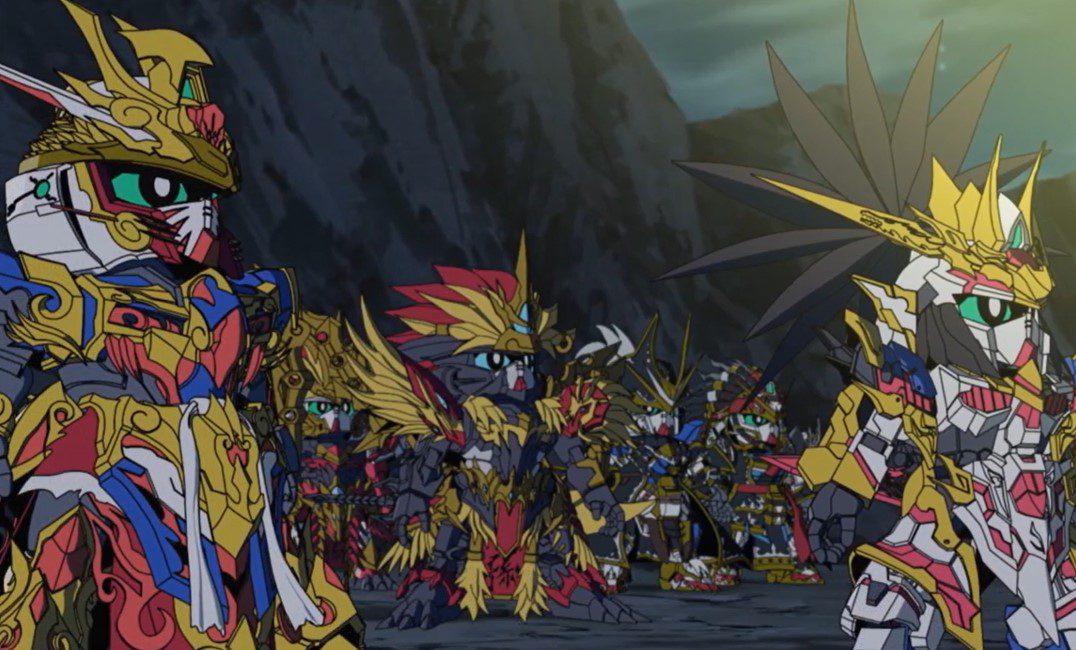 The trilogy starts with SD Gundam World Heroes Episode 23, with Liu Bei helping Master Cao Cao take down the enemy. This episode will be released this coming Thursday. From the recent SD Gundam World Heroes episode, the Heroes gathered and witnessed Cleopatra evening as she flat in mid-air. Caesar wonders what is happening to the princess. A massive yellow light begins to glow around Cleopatra, and the like of Liu Bei realizes that it is a Regina World. Cao Cao is worried about Cleopatra and wonders what will happen since she has evolved.

Cleopatra opens her eyes while floating and comments that she has been waiting for the courageous warriors who stand up to face the world crisis. The gates to the Regina World opens. Sim Yi and Nobunaga realize that they are witnessing the Haro powers and Sim Yi said it is beautiful. Nobunaga said they would get the party started. The Hero party walks towards the entrance, and they are surprised to see a pyramid transforming. Cleopatra thanks them that the five Haros are here, and they built this pyramid for that.

It is a unique interceptor that they can use to defeat the evil star. Zhuge realizes that they built that weapon to fight against the Dark Star. The guy talks with Zhuge and admits that Zhuge doesn’t know his name ever since they have arrived. He told Zhuge that he is Caesar Legend Gundam. Caesar asks the warriors to allow him to express his gratitude again. He told them that the floating lady is Cleopatra Qubeley, who is their leader. Cleopatra reveals that the preparations are set, and they are ready to stop the Dark Star. The episode title is ”Qiongji Attacks.”

The crew heard the sound of a weapon and look above and notice a villain laughing at them. The guy thanks them for the hard work, and Liu Bei wonders who those guys are. Wukong and Cao Cao realize that it is Sima Yi. Zhuge comments that he knew Sima Yi has something to do with this. Wukong steps forward, and Zhuge wonders why Wukong is moving like a robot. Sima Yi said that he misses working with Wukong, and they had a fun journey together in the past.

Wukong said Sanzang and Liu Bei wonders if the second guy is Sanzang. Cleopatra adds that Sanzang is the one who is trying to destroy the world, and the guy is a source of all evil. In the past, an evil dark shadow emerged and said it is Sanzang and danger if coming. Sanzang told Zhuge Liang that he is the only guy he can count on to protect the people of this planet. Back to the press, Zhuge looks at Sazang and asks what is happening. Sanzang teleports to the ground with a massive explosion.

Cleopatra told him they have five Haro in possession, Sanzang’s scheme is out, and there is no reason to fight. The soldiers arrive, telling Sanzang and Sima Yi Destiny Gundam that the area is surrounded and can surrender. Sanzang replies that it doesn’t matter who he is, but he can retrieve his weapon. Cleopatra realizes that he is talking about Haro and tells him that Haro would never follow the commands of an evil man like him. Lui Bei won the battle using Chozetu Ryuhazan, but Wukong rampages. The real Sanzang arrives since the evil one is fake and uses a shield to protect everyone.

Where To Watch SD Gundam: World-Heroes-Episode 23

You can watch SD Gundam: World-Heroes Episode 23 online on Crunchyroll and Funimation. SD Gundam World Heroes updates the latest details of the anime online on official platforms, and the series has English subtitles.