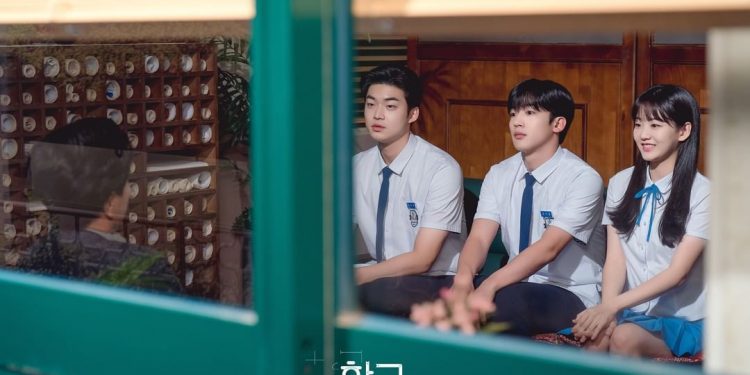 High school has been a crazy ride for everyone. And, the Kdrama fans are experiencing love, career, and family issues once again with ‘School 2021.’ The ongoing KBS2 teenage drama is proceeding with the plot, and things are becoming attractive for the fans. Mainly, because ‘School 2021’ focuses on the life of more than two primary characters, fans are able to resonate with multiple real-life stories at once. In School 2021 episode 4, things went down after the terrace incident. Moreover, Eun Bi and Seo Kang created trouble at the amusement park, only to become close friends. However, School 2021 episode 6 might change the course of friendships and love stories.

The eighth installment of the famous ‘School’ series by KBS is progressing in terms of viewership too. School 2021 is gathering the attention of youngsters with its captivating twists and career issues. The drama talks about the rigidness of life and how career decisions can put one under pressure.

Hopefully, the audience and viewers are also looking forward to finding answers to all the problems. At present, the students at Nulji Science and Technology High School are pacing back and forth between their feelings and career options.

On the other hand, the preview is not available to the audience. But, with all the drama going on and the review of episode 5, we can easily depict the foundation of the upcoming storyline. The destined couple- Gong Ki Joon and Jin Ji Won are getting closer and might get together. But, where’s the fun in that? In the preview for episode 5, we find Jin Ji Won getting into an unexpected situation involving her grandfather. And, it could be one of the reasons behind the change in her bond with Gong Ki Joon.

Meanwhile, Seo Kang revealed that she fell in love with Jung Young Joo when she saw him at the orphanage. Now that the two are in a fake relationship, things might get crazy between them. Also, Young Joo’s possible crush on Jin Ji Won can create more drama among the four students involved.

Following the romantic relationships, the bond between Gong Ki Joon and Jung Young Joo is another crucial aspect of the drama. The two behave like frenemies. Also, their past keeps on creating nervous tension between the two. In the next episode, we can find them opening up more about the history they share.

School 2021 episode 6 will initially release on the KBS2 network in South Korea. But, luckily, the international fans who can only watch the drama have a way to stream the episodes.

With the help of Rakuten Viki, School 2021 fans can watch the latest episodes. Viki serves as one of the original networks of the show. Hence, the latest episodes are updated on its page as soon as they are released. All you require is a subscription, and you are ready to go. The subscription plan and charges vary from country to country. But, you will be able to get subtitles in all languages, including English. Thus, Rakuten Viki is the best option to stream the drama.

Besides School 2021, you can also watch other hit classics and freshly released Korean dramas on the platform. It will also allow you to watch the other ‘School’ installments.

Even though the drama has released only four-episode, the fans have their own reviews on the plot ad characters. As per the official viewership ratings, School 2021 is doing fairly well in the nation. Meanwhile, the fans are happy to see a different story structure than the previous School series.

Furthermore, the absence of not-so-common ‘poor boy’ and ‘bully’ storylines makes the drama more understanding. It deals with more obvious and natural hurdles that students face. Therefore, it has become a favorite among many already. And, we believe that with upcoming episodes, fans will start liking the drama more.