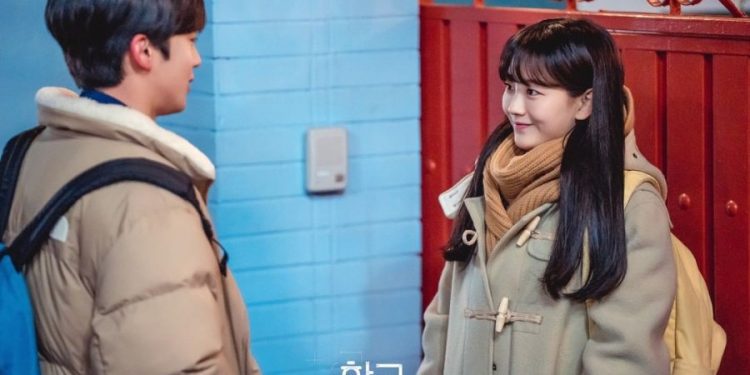 ‘School 2021’, the eighth edition of KBS2’s school franchise, revolves around the lives of eighteen students attending a specialized high school. It takes us on a journey through the highs and lows of adolescence and their path to their ambition. The casting of actors like Kim Yo-Han, Choi Yi-Hyun, Choo Yeong-woo, Hwang Boreumbyeol and more, was like icing on the cake as it enhanced not only the storyline of the characters but also their chemistry. Since it belonged to the most-watched franchise, this drama had been highly awaited by the fans of School 2017. Now, we await ‘School 2021’ Episode 15, which is soon about to be released.

It all starts with Gong Ki Joon, a student who was left uncertain about the goals of his life after his injury. Jung Young-Joo is a troublesome transfer student who also has a past tied with Ki Joon. Meanwhile, we also meet Jin Ji Won, a confident young student who has no qualms about expressing her ideas, and Kang Seo-Young, an aspirant who is preparing to apply to one of the top 5 universities of the country. The drama depicts the innocence of youth and its plea to live the life it desires. Fans are already developing theories and ships in the drama. School 2021 is based on the novel Oh, Naui Namjadeul!

In ‘School 2021’ episode 14, we witness the students deal with the departure of Lee Kang Hoon, a new teacher in the Department of Architecture, from the high school after he testified against the institution’s foundation. As Kang Hoon had testified for Jung Young Joo, this caused him to blame himself. As the students adored Lee Kang Hoon, Jin Ji Won, along with the other students from the department, came up with a plan to protest in front of the school in order to bring Lee Kang Hoon back. Meanwhile, Ji ho sung is seen regretting himself and distancing himself from Eun Bi after receiving negative comments and rumors after she referred to Ho-sung as her boyfriend. While there’s a lot of tension in the air, rest assured as we get our favorite couple Gong Ki Joon and Jin Ji won sneak out on a midnight snack date.

Lee Kang Hoon, unaware of his student’s efforts to bring him back, gets informed that his students are protesting in his support and gets emotional. As we near the conclusion of School 2021 Episode 14, It is revealed that Lee Kang Hoon had been unfairly removed by Chairwoman Koo Mi Hee. The school board had not yet approved his dismissal, and the chairwoman had posted a bogus Log on the school website that stated Lee Kang Hoon as dismissed. We see Young Joo attempting to steal the real log as he felt responsible for Lee Kang hoon. But he is saved from committing the crime by Gong Ki Joon.

After being admonished by both Gong Ki Joon and Kang Seo young, Young Joo realizes that he could’ve ended up in prison. He respects Kang Hoon’s decision and decides to help him in the right way. The fans must be excited to see sparks between Jung Young Joo and Kang Seo Young as it has been looked for the most. While no one steals the genuine log, it is discovered in the morning that it was stolen, and somehow the robbery gets blamed on Gong Ki Joon.

What To Expect On Episode 15?

School 2021 is full of twists and turns, as well as cliffhangers. As we ended on Gong Ki Joon being blamed for the stolen log from the chairperson’s room, we can definitely expect to find out who the true thief is. Hopefully, in this episode, Lee Kang hoon will return to the high school. Fans are eagerly waiting for some warm scenes with Jung Young Joo and Kang Seo Young.

The School 2021 Episode 15 will be released on 12 January 2022 at 9:30 PM KST. It airs every Wednesday and Thursday. The episode will be broadcast on the KBS2 network. As we move forward with the plot, the drama reveals an increased number of obstacles that the students must overcome in order to move towards their ambition.

The original can be watched on KBS2 network. The drama is also available with English subtitles for the international fans on Rakuten Viki

Is Killing Stalking A Horror And Not A Romance?

Will The Contestants Win The Throne From Winter Child In ‘King Of Mask Singer’ Episode 342?