Satoru Gojo vs Ryomen Sukuna: Who Is Stronger in ‘Jujutsu Kaisen’?

Gojo and Sukuna in a still from an episode of JJK

Who will win the battle: Gojo Satoru vs Ryomen Sukuna? Who is stronger between the two in Jujutsu Universe? Jujutsu Kaisen, the anime which has won the Best Anime of the Year Award in the Crunchyroll Anime Award 2021, follows the story of high schooler Itadori Yuuji who becomes a member of a secret society of sorcerers to defeat a legendary demonic curse, Ryomen Sukuna, by becoming a demon himself. JJK has come out to be the most streamed anime of 2021, and we can say with certainty that it is the anime’s unique storyline and amazing character design that has contributed to its popularity and growing fanbase.

Two of the most intriguing characters of the show are Gojo Satoru and Ryomen Sukuna. Not only are the two the strongest in the Jujutsu Universe, with Gojo being the strongest sorcerer and Sukuna being the strongest curse, the two are also the characters most shrouded in mystery. Even with ample screen time, not much information either on their background or the scope of their abilities is given. This element of mystery has been making the fanbase crazy with curiosity. Although with everything considered, one question of utmost importance that comes to mind is, ‘Who is stronger? Gojo or Satoru?’

In this article, we shall answer these questions with the utmost research and by taking everything into consideration so that you don’t have to. Dive into the space specific to the fan-favorite Gojo and Sukuna.

JJK, short for Jujutsu Kaisen, is an anime based in a universe where cursed spirits or demonic entities born out of negative human emotions terrorize and kill humans. Although the cursed have overwhelming numbers, they have been kept secret to human society, with the Jujutsu Society ensuring the world’s safety. Thus, the anime follows the journey of Itadori Yuuji, an ordinary high schooler in present-day Japan who is thrust into the world of curses to protect the ones he loves from curses by becoming one himself.

Also Read: Is Jujutsu Kaisen Getting A Movie?

Who is Ryomen Sukuna?

Ryomen Sukuna is a 1000+ years old legendary curse deemed as the strongest curse to date in the Jujutsu universe. Sukuna holds the title of ‘King of Curses’ and is considered to be so strong that even all the sorcerers combined cannot defeat him at his full power. Serving as the main antagonist or final boss of the series, Sukuna is pure evil. His personality that has no trace of humanity has made him the perfect villain, which has won him the ‘Best Antagonist Award’ during the Crunchyroll Anime Awards 2021. Extremely powerful, he does what he wants to. Sukuna, in one of the episodes, has also threatened Gojo that he will one day kill him. 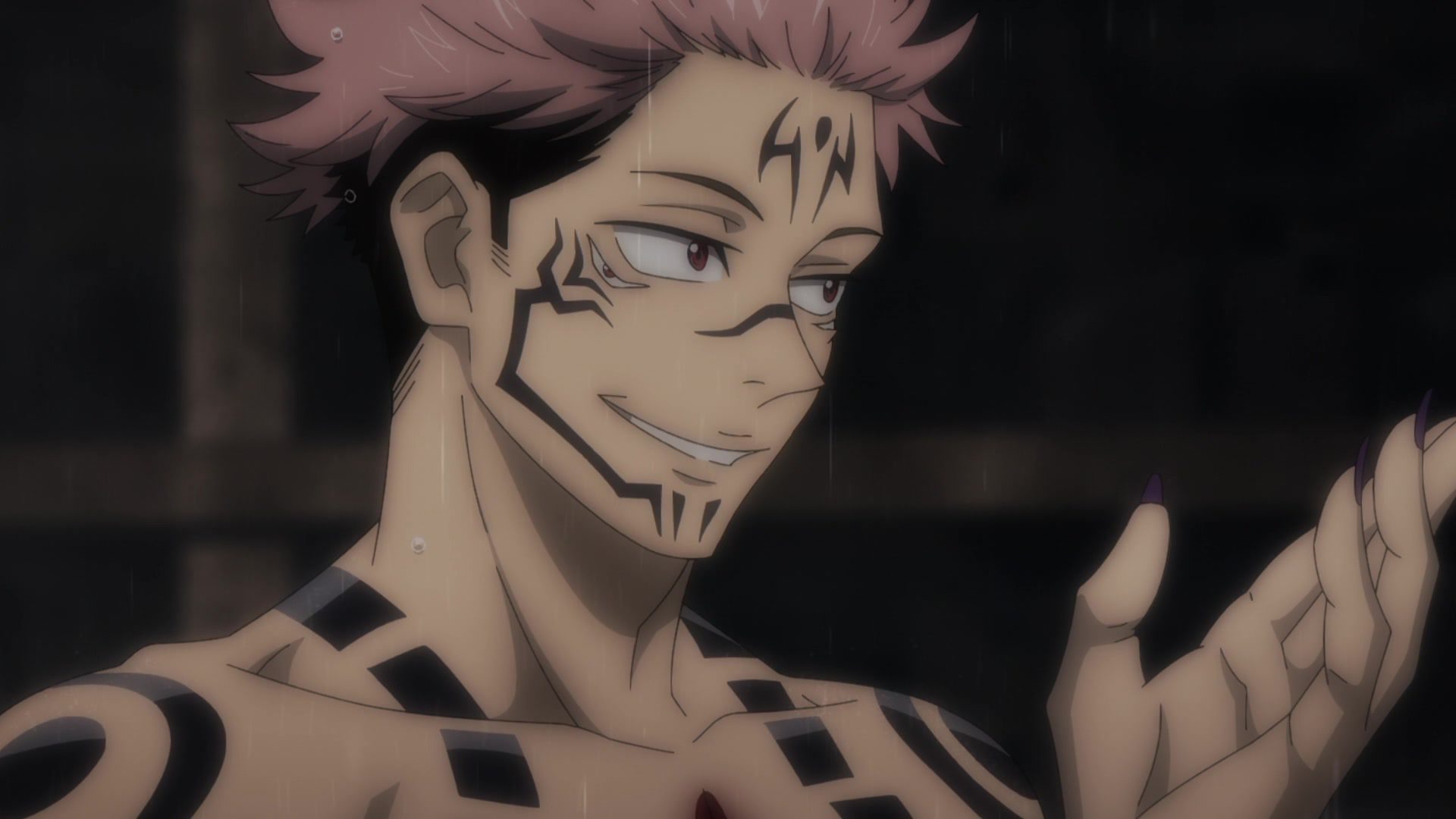 Sukuna was thought to be an Imaginary Demon, but in reality, he was a human sorcerer during the golden period of Jujutsu over 1,000 years ago. After all the sorcerers teamed up to defeat him, he became a cursed ghost after his death. His curse was too severe for his corpse to be completely destroyed, and thus his 20 unbreakable fingers, sealed in burial wax, traveled through the years as cursed artifacts, increasing in power with time. Sukuna in the present has reincarnated into Yuji Itadori due to the latter eating one of his cursed fingers.

Sukuna’s original form is characterized as a four-armed monster with two faces.  During his possession of Yuji, Sukuna looks the same as his host but with lines on wrists and upper arms, circles on both shoulders, two curve lines on his chest, and two lines on his stomach, and two closed eyes under the normal ones.

Who is Satoru Gojo?

Gojo Satoru is the stronger Jujutsu Sorcerer who also works as a teacher at the Tokyo Jujutsu High. He plays a pivotal role in the anime as a secondary protagonist as the only one from the higher authority who wants Itadori Yuji to live. Thus, he becomes Yuuji’s mentor and helps him hone his enormous powers. Gojo is of the viewpoint that the Jujutsu society is corrupted and flawed. Thus, he someday wants to be able to change the structure of Jujutsu society. It is due to this reason that he works as a teacher as he wants to bring about a change in the mindset of the new generation of sorcerers. He has mentioned many times that if he so wishes, he can easily kill all of the high-ranking sorcerers. Though, he has stated that he does not approve of the method and has thus not resorted to murder. 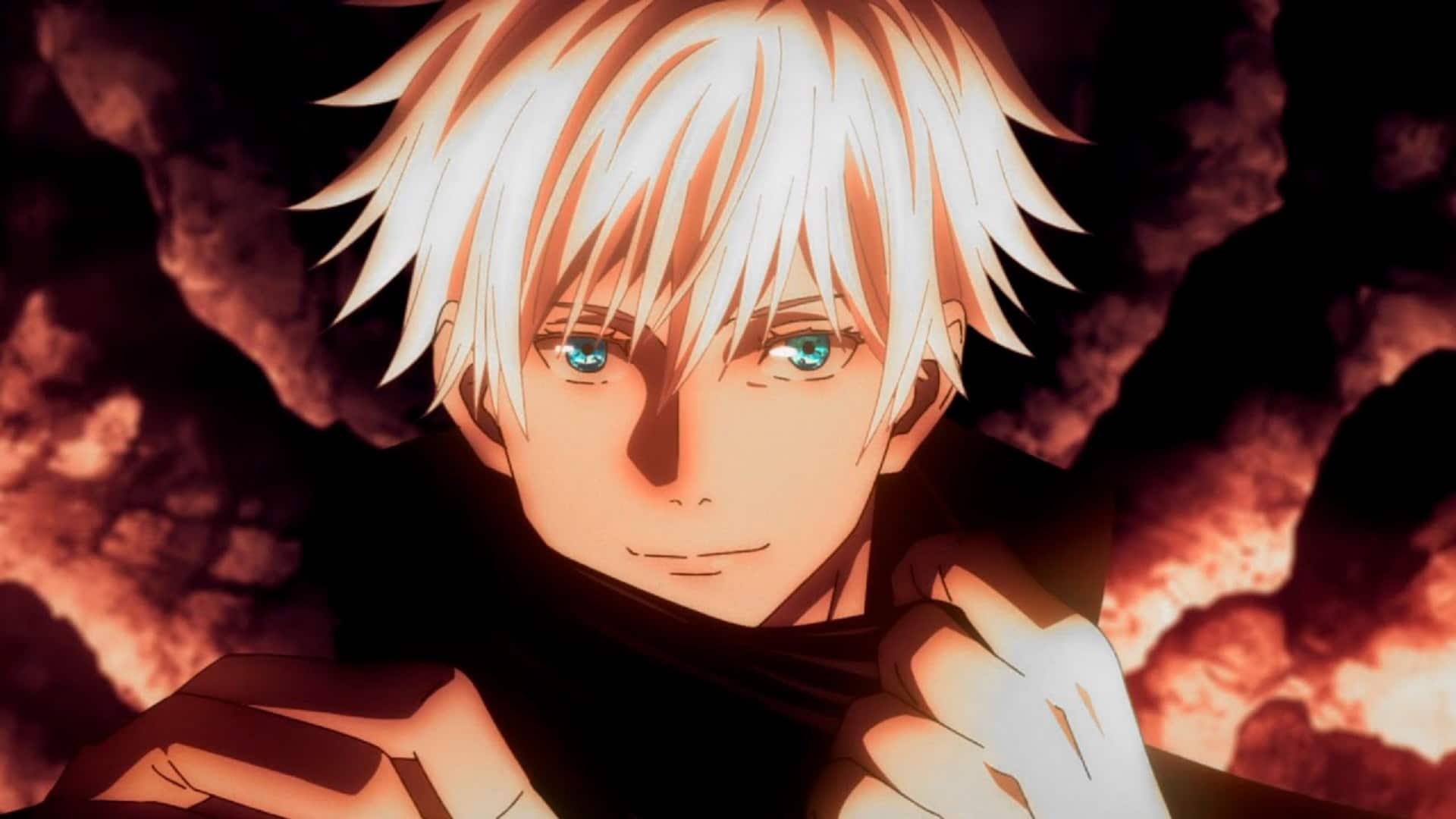 Despite the burden of the aspiration that Gojo carries, he is a very comical character that is always up to some pranks or the other. He always has a smile on his face and is a constant chatterbox. Though, this does not mean in any way that he is stupid. Highly intelligent and observant, Gojo is capable of a cold, calculated analysis that many can only dream of achieving.

Who Is Stronger? Gojo vs Sukuna

As of now, it is pretty clear that the only sorcerer capable of defeating the might ‘King of Curses’ is Satoru Gojo. However, is it as simple as Gojo defeating Sukuna or vice versa. Let’s keep in mind that Sukuna, even without being at his full potential, is so powerful that even the most experienced sorcerers would have trouble coming close to his power. Let’s also not forget that he has been alive for centuries now, so who knows just how skilled he is? And the last thing that adds the cherry on the top is the fact that Sukuna is definitely many times stronger than he was during the golden age of Jujutsu as his cursed fingers have been getting stronger through the years.

Satoru, on the other, is the only sorcerer in four hundred years to have acquired the Six Eyes and mastered the Limitless Cursed technique. This is what has led him to be deemed as the Strongest Jujutsu sorcerer.

In one episode of Jujutsu Kaisen, Yuji asks Gojo who wins in the fight Sukuna vs Gojo, with the latter replying that Sukuna would lose. If the battle came down to their domain expansion strategies, Sukuna’s domain technique is unparalleled. There’s not much Gojo can do unless he can cast Infinite Void over Sukuna’s Malevolent Shrine, which was huge enough to wipe away a large portion of the Shibuya Arc’s terrain. Also, hitting Gojo physically due to his Infinity is not possible.

Gojo is likewise vulnerable to Sukuna’s slicing cursed technique because Infinity doesn’t operate inside Domains. If we take these facts into account, we can say that Gojo and Sukuna might be equal in terms of power. However, these are all simple calculations that we have made on the basis of only a small portion of their true strength being revealed. None of us, as of now, know what both of them are truly capable of at their 100%. So, we are basically just betting here.

What is certain is that a fight between Gojo Satoru and Ryomen Sukuna is inevitable. Some fans are of the opinion that Gojo is stronger, with many fans of the opposite opinion. Pretty soon, we will know who is stronger with the fight that is bound to happen.

Let us know in the comment section who you think is stronger between Gojo and Sukuna.

Sukuna is named after the Japanese mythological character Ryomen-Sukuna who was believed to be a demonic entity mentioned in the Nihon Shoki as having emerged in ancient Hida Province during Emperor Nintoku’s reign in the 4th century. He was characterized as a guy of unimaginable power, with a two-faced head and a total of eight limbs, four arms, and legs for each face. He tormented villages after villages in ancient Hida, looting and spreading devastation in his wake until Takefurukuma no Mikoto, a valiant military commander despatched by the Imperial Court, came forward and eventually defeated him.

Some people worshipped Ryomen-Sukuna as a minor god, and sculptures of his distinctive two-faced head can still be found at Gifu temples and shrines today. Sukuna came 10th in the 1st characters Popularity Poll.

In the Character s Popularity Poll, Gojo came in third place. He began consuming sweets to boost his brain but developed a sweet tooth as a result. He can achieve everything he sets his mind to. Therefore he avoids becoming too engaged in anything.  In high school, he was a Digimon enthusiast. Digimon voice actors have voiced Satoru in both the English and Japanese versions. On Twitter, Kaiji Tang revealed Gojo’s fondness for Digimon. The name ‘Satoru’ is a masculine Japanese given name derived from the verb “to know” or “understand.” in Japanese. His theme song is “Mada Minu Asu Ni” by Asian Kung-Fu Generation and “Shame on Me” by Avicii, according to Gege Akutami.

Shimron Hetmyer Wife: Who is the partner of this Swashbuckling Southpaw?

Shimron Hetmyer Wife: Who is the partner of this Swashbuckling Southpaw?

December 2021 Kpop Comebacks You Need To Look Forward To!