Sandoval & Schwartz are making a name for their bar among friends while Kate and Ariana are pushing their own business with a little help of Lisa. 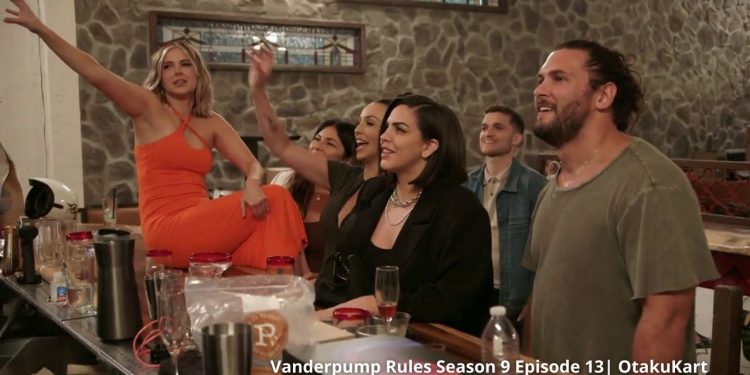 Vanderpump Rules Season 9 Episode 13 sees Kate and Ariana bringing their own business against the boys. For the same, they are joining hands with none other than Lisa. Coming to Sandoval and Schwartz, they are planning to make a name for their bar among friends and peers. A party will surely be enough for the same. Lastly, James probably had it all with everyone calling him controlling. The coming episode may see him going all out and expressing what he feels.

So recently on the show, things haven’t been the best between Schwartz and Sandoval. Kate wanted to inovle herself in their business which only led to fights with Sandoval. So Schwartz and Sandoval had to keep themselves away form each other for a break.  Meanwhile, Kate decided to go on with her own business if boys don’t want her involved. Meanwhile, James being controlling of Raquel is the news that spread like wildfire. Now it has started bugging James from everywhere.

Previously on Vanderpump Rules Season 9, we opened up with Schwartz adjusting his life a little. He is trying to stay away from Sandoval after the big fight Sandoval had with his wife Kate. The guys are on a break and Kate wonders if he is doing good. Raquel and James are planning an engagement party and a bachelorette party. But the thing is James isn’t happy with the strippers or anything. He doesn’t want a trashy bachelorette party basically. Raquel and her sister found James a little controlling that was not cool.

Meanwhile, Lala was preparing for a party, and Brock on his side had plans to get engaged and married to Scheana. He is planning a surprise factor. Kate later paid a visit to Sandoval and Ariana. While boys didn’t want them in their business, Ariana offered to join forces with Kate for the sandwich business. James later visited Lala for the DJ playlist and Lala confronted him for being controlling to Raquel which didn’t end well.

Randall confessed to Lala about Brock’s surprise party while he was coming to Lala’s office. She listens to Brock but is worried that he is trying to do something big in just two days. Of course, the venue is canceling on him. Apart from all of this, she also told Brock about James controlling Raquel. This further moved over to the Sandoval as well when he came to Lala for makeup for her Lala Beauty party.

Later at the party, things got a little awkward for Schwartz. He didn’t know how to communicate with his best friend Sandoval since they are on break. He wants to keep things straight though. James was confronted by both Brock and Sandoval. This further fueled him and he decided to confront Lala himself. Anyway, things cooled down in the end as every celebrated Lala Beauty as episode came to a close.

Vanderpump Rules Season 9 Episode 13 is releasing on 4 January 2022. It is titled, “Unprogress Party”. The official synopsis of the episode suggests Sandoval and Schwartz are planning to throw a progress party so that they can show off their bar to friends and family. After joining forces with Ariana, Katie had pitched the idea to Lisa about the Sandwich shop. So now the trio is coming together to discuss how they can further take this idea ahead.

Closing moments of the previous episode also told us that Brock and James are about to have a blowout. This might have to do with the fact that everyone feels he is controlling. Brock tried to have a conversation with him in the last episode. The same topic resurfacing might have triggered James.

Also Read: Can Kody Put Up With The Pressure in Sister Wives Season 16 Episode 7?