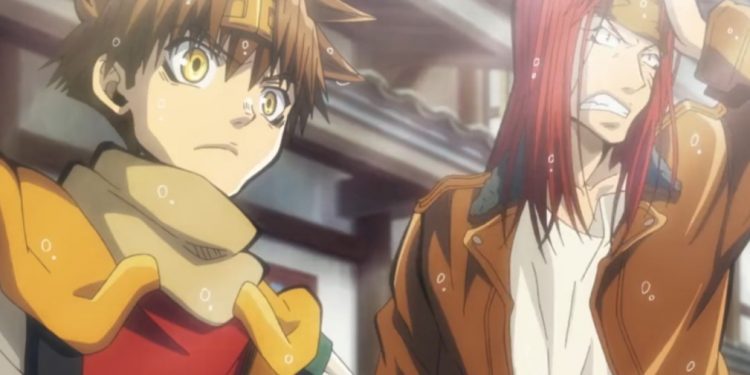 Saiyuki Reload Zeroin Episode 3 reveals the war between top-class assassins and demons. Goku, Hakkai, Sanzo, and Giyo, have recently arrived in town and met with Hazel, who helped them eliminate the monsters. Another war has recently broken out, and Goku faces the demons with his crew. Hakkai jumps out of the window and finds that the monster is waiting to smash him into pieces using a gigantic Axe. By Goku interferes and sends that monster flying. Saiyuki Reload Zeroin’s latest episode reveals the mysterious demons trying to eliminate humankind.

Sanzo told Hakkai, Giyo, and Goku to leave the town. Hakkai realizes that those monsters and demons won’t let them leave unchallenged. Giyo wonders why the demons keep on saying kill the demons. The trio begins to smash them. But Sanzo was smoking and commented that they were making progress. He let the trio fight all the time while he relaxed and enjoyed smoking. Giyo social Sanzo and call him a stupid, lazy Monk; he reminds Sanzo to help them. Goku wonders if the enemies are humans who are turned into monsters. He realizes that they can kill them since they have been revived.

A girl who cares about her father stops him, but he sends her flying. Sanzo gets angry that a father hits a daughter. He believes that no one is supposed to beat a lady. Sanzo told Goku to kill that father who beats ladies. Goku feels pity for a lady since he can’t kill her father. Sanzo shoots the father on the forehead. The father turns into clay, and other monsters get scared; they throw their weapons away since the human instinct has awakened, and they run away. The daughter was shuttered, witnessing her father in the form of clay.

Hakkai wonders why Sanzo has to go that far, and he knows that Sanzo always kills when the demons or monsters arrive. But the daughter decided to pick up a clay form of her father since she believed that the Bishop could revive her father. Goku wanted to console her, but she acted bravely and decided not to drop a single tear. He tried to stop her, but she pushed him away since she was furious. Goku wonders why they have to revive people who will be turned into monsters.

Sanzo told the crew that they were leaving the city. Hazel and Hawks watch the grew as they leave. Hazel realizes that those four will never set their foot in this country. The daughter is searching for the Bishop to revive her father, but she can’t find him. Hazel feels pity for her and believes that life is not valuable to him as an insect. Later the crew arrived near the river and had their lunch. Goku finished more than five cans of food since he has lost a lot of mana during the battle. Sanzo wonders why Goku has to eat like that, and Goku replies that it is nothing.

Giyo scolds Goku since Goku always claims that he is not getting enough when they eat. Hakkai is glad that they are using canned food that will last long. Goku realizes that he is missing eating meat buns and wish he should have saved them. Sanzo reminds Goku not to care about that since he knows that Goku is venting his anger on canned food. Goku finishes his cans and asks Hakkai to give him more food. Hakkai reminds Goku that they will eat later.

Saiyuki Reload Zeroin Episode 3 will be released on 20 January 2022. The elves wielding blades arrived, and the skinny muscle one points at Sanzo and says that it is the men of Sanzo’s group they wanted. Giyo can’t believe that those monsters are starting another battle. Goku warns the monsters that he didn’t have enough meal, making him angry. Hawk and Hazel arrive and kill all the monsters with two shots. Let’s look at Saiyuki Reload Zeroin Episode 3 official details.