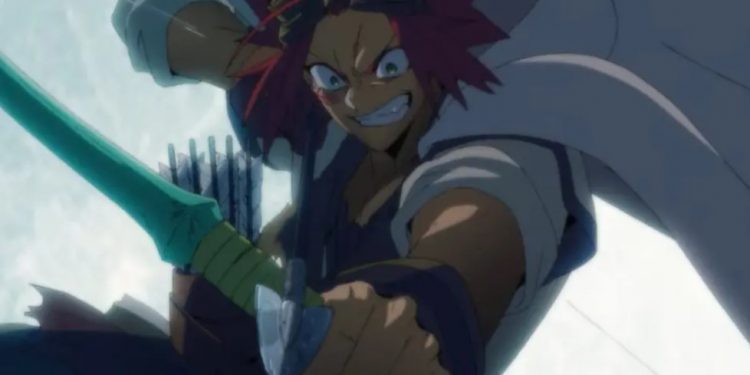 SABIKUI BISCO Episode 2 reveals the mystery behind Man-Eating Mushroom. A mysterious that engulfed the city of Japan wiped out all the buildings and humanity. But a hooded guy traveling alone arrives in Japan and notices the damage that has occurred. Oota and his father helped that strange guy, but his card was not working. They have a wanted poster on the wall of a “Man-Eating Mushroom Akaboshi Bisco,” and whoever finds him will get a reward of 800000. SABIKUI BISCO’s latest episode reveals a strange traveler who recently arrived in Japan. Oota’s father asks the traveler if he knows the wanted guy on the poster.

Oota believes that guys who go there are attending a funeral. He told Watarugani to also look at the Tokyo crater. But His father thinks it is a stupid idea since no one would want to go and bask in the Rusty Wind. Oota wonders why only monks are people who always pass through here. He also told Watarugani about the endless desert of iron and that they are bored. Oota’s father reminds him about a criminal trying to escape, and if that criminal passes them, it will be over.

Watarugani managed to pass, while later in town, the Japanese sell their products, and the other guy talks about rust. The kids meet with an officer riding a dragon and ask about a guy selling mushrooms. The kids told an officer that no one does such things around. But he told them that if they see him, they must inform them. The old lady at the bar narrates how she left the town after her father died from Rusting, and it also affected her mother.

Rusting diseases forced the family to move since the villager didn’t want to get affected. The old lady believes that the villagers are heartless. The girls talked about their clients and that they are from the era before Tokyo was wiped out. One of the girls believes that the lady is crazy since she talks about things that would never happen. The old lady reveals a portal that appeared in the night, and the girls tell the others not to take the lady seriously. She told them not to take her for granted, and they must listen to her.

The doctor treats the patients with Rusting disease. But one of the citizens didn’t have money to pay for expensive Rusting Treatment. The doctor told the citizens not to worry and help them. The guy who sells mushrooms arrives and sells it to the chef. He told the chef not to get caught and mention his name. Dr. Milo bought mushrooms since he wanted to treat his sister Pawoo. Oota bumps with Milo, who treated him and told him to visit Panda’s clinic. Kuro and his men arrive, and Milo realizes that he might be in danger.

SABIKUI BISCO Episode 2 will be released on 16 January 2022. Kuro is glad that Milo buys drugs from him, and Milo thanks him since it is helping his sister Pawoo. Kuro reminds Milo that those with no money will die. On the other side, Watarugani reveals what he is holding, and they give him a visa to pass to the other side. Watarugani realizes that he is Akaboshi, and he once battles with Koru’s Rabbids team and saves Milo and other citizens. Let’s look at SABIKUI BISCO Episode 2 official details.

Akaboshi uses his arrow that releases mushrooms to defeat Kuro’s team. Milo learns that Pawoo is a secret agent who wants to fight with Man-Eating Mushroom Akaboshi Bisco. Akaboshi met with Milo and told him to call him Bisco after realizing that Milo is a doctor. Let’s meet when SABIKUI BISCO Episode 2 is released.

Also Read: Will Richard Become The King In Requiem of the Rose King Episode 2?.

Kaidou Proves to be Undefeated in One Piece Episode 1006