Will The Man-Eating Mushroom Save His Master In ‘SABIKUI BISCO’ Episode 1? 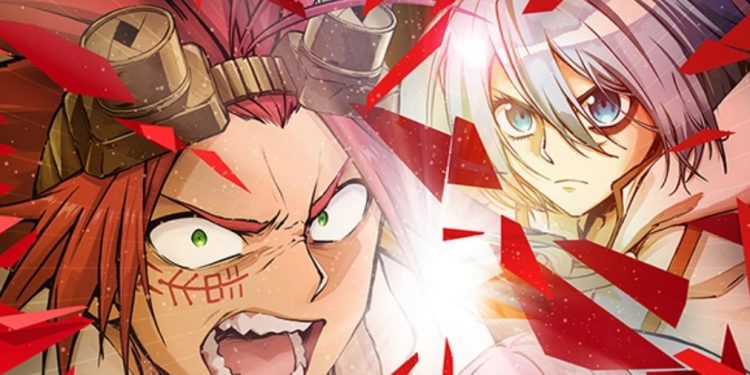 SABIKUI BISCO is a series written by Shinji Cobkubo; it is also known as Rust–Eater Bisco, illustrated by K Akagashi. SABIKUI BISCO has released two PV and official trailers online on Chrunchyroll. Mocha worked with the building art of the anime. ASCII Media Works released eight volumes under their Dengeki Bunko label. Yen Press in North America licensed the light novel, and the manga adaptation by Yusuke Takahashi was serialized online via Square Enix’s online manga magazine Manga UP. SABIKUI BISCO has four volumes collected, and an anime Tv series adaptation by OZ is set to begin this January 2022.

This is about Bisco Akaboshi, who is known as Man-Eating Mushroom. SABIKUI BISCO is making its first appearance on screens, but the manga continues, which will stay on screen for some time. Bisco Akaboshi works with his allies to solve Japan’s mystery, but he used to trouble people before the recent incidents in Japan. The Japanese get worried about Akaboshi since he commits foolish crimes, and they keep on chasing after him, believing that one day he will see the light and change. The incidents changed Japan’s appearance.

But the government tried to find resolve until Bisco Akaboshi learned something about his arrows. It was strange for him to know how his arrows grew mushrooms. Akaboshi loved his master wholeheartedly, and he could do anything for his master. He worried about his master’s illness and couldn’t find the cure. Japan suffered from the worst nightmare and wonders who will solve the mysterious incidents that will soon wipe the humanity. Bisco Akaboshi steeped up to rescue Japan and his master. Let’s learn more about Bisco Akaboshi, Man-Eating Mushroom, and Japan’s incidents below.

One day in Japan, a mysterious wind blows across the arid while the sandy expanses and sweeps living and nonliving creatures, and only rust remain in its wake. After investigating, they find that the mysterious mushroom’s spores caused the incidents and changed the state of the world. Bisco Akaboshi, the “Man-Eating Mushroom,” became the world’s most wanted criminal archer since he possesses strange arrows. His arrows continually grew mushrooms wherever they touched. But Akaboshi is, in truth, a “Mushroom Protector.” He spread the fungi to make the land healthy and return to its state.

During his adventures, Akaboshi met with the crab Akutagawa and young doctor Milo Nekoyanagi who joined him searching for the legendary “Sabikui.” Sabikui is a panacean mushroom well-known for getting rid of all forms of rust. But Akaboshi’s bow destroys the rust of destruction to protect his beloved ones. This happened in the future of Japan, where the “Rust Wind rusted everything.” Humankind feared their worst nightmare Rust Wind since it intended to wipe out humankind. The humans realize that they are in danger, and the world turns into a desert due to this human nightmare.

Fortunately, they were lucky to have the world’s most wanted criminal who decided to save them from the Rust Wind. Akaboshi is known for creating chaos around Japan, but he learned that his master was dying and went out to find a mushroom Rust Eater. The new adventure became exciting for Akaboshi and his allies since he knew he would find a cure to save his master. They encounter the Saitama Iron Desert that blocks their path and the other town formed from the remains of the weapons that destroyed civilization. They travel through an abandoned subway line ruled by giant octopuses.

SABIKUI BISCO episode 1 will be released on 11 January 2022. Akaboshi knew that they had entered giant octopuses’ territory. Still, he feared nothing since he had Milo, a genius, and his arrows. They discovered the evil plots of a wicked prefecture governor. The adventures of Man-Eating Mushroom have begun. The next episode title is “The Man Worth 800,000.” Let’s look at SABIKUI BISCO Episode 1 official details.

Will The Goddess’ Wish Get Fulfilled In Life With an Ordinary Guy Who Reincarnated Into a Total Fantasy Knockout Episode 1?