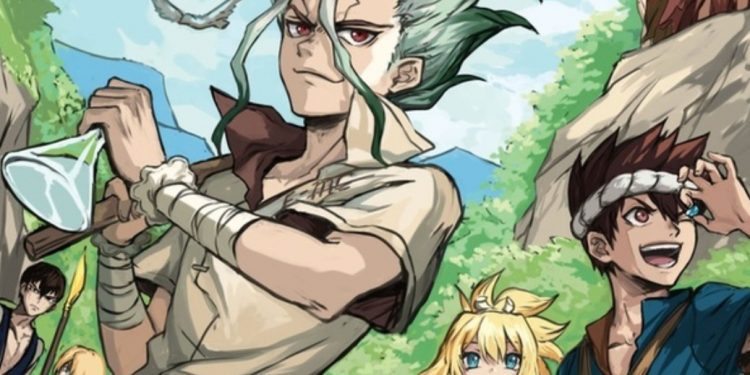 Dr. Stone Chapter 221 reveals Ryusui’s desires, and Xeno reveals the three heroes going to the moon. The science crew gathers and begins with another project, and Gen talks about Ryusui’s desires. Dr. Stone reveals the mystery behind the trip[ to the moon, and this begins after the world got petrified and revived by Suika. From Dr. Stone’s latest chapter, Gen teases Ryusui to be excited to go to the moon. Francois believes that Ryusui is open who desires all. Kaseki reminds the team how they wiped out the persues.

Sai joins the crew and tells them what Ryusui used to do when they were kids. Ryusui loved to build ships and promised Sai that someday he would set sail. Sai was always busy with math and science while Ryusui talked about adventures and would build his ship. One day Ryusui asks Sai to help him with the science stuff of his ship. In the present time, Sai showed the crew a flight simulator for the rocket. He realizes that Ryusui also asked him to make one for the ship in the past. The crew celebrates after witnessing Ryusui’s work.

They enjoy playing games, and Ryusui beat the high score. Taiju was impressed, and Ryusi reminds them that he was the champ of the sim game. He also talked about science and their trip to the moon. The crew realizes that no one can claim that they are better than Ryusui when being a pilot. Ukyo admits that Ryusui is the best in that, and he is the stone world experience pilot. Ryusui also remembered some of the incidents they experienced in the past. Kohaku, Sai, and Minami watch the new science tool that Sai created.

Senku believes that they might have a firefight on the moon. He joins Kaseki and Dr. Xeno and talks about moon combat that they have never experienced. Senku thinks that it will be interesting and Chrome talks about the medusa. He reveals what they will do since they never do something without planning. Joel creates a “Resurrection Watch” and shows it to the team. Crome wore that watch and noticed that there was a dose of revival fluid in it. Joel reveals how the watch works when Petri-Beam strikes. Chrome thinks that it should make it for everyone in the world.

He thinks that worldwide certification will never scare them again if everyone wears that watch. Xeno had his say about the mountains of medusas. Kohaku wonders how they can deal with that. Tsukasa told them about the multistage attacks and gave them some explanation about the waves of Petr-Beams. He advised the crew to do something before the next medusa released its wave of light. Senku believes that secondary special items will help them. They created a new weapon that looked like a machine gun and created an explosion after it worked. The reveals it is the Ultimate Weapon: the Granade Net Launcher.

The Ultimate Weapon managed to destroy the medusa, and Chrome was glad to see that. Later they get guns and practice shooting at the medusa on the line. Senku, Kohaku, and Ryusui practiced shooting since they were three heroes going to the moon. They will get petrified, and the Resurrection Watch will revive them. Ryusui shows great skills during practice. Senku and Kohaku were impressed, and they also praised him. Ryusui thinks that there is someone better than him who is the world’s greatest marksman.

Dr. Stone Chapter 221 will be released on 5 December 2021. Ryusui knows that only those who battle the Kingdom of Science know the mystery behind the hidden chamber. He realizes that it is the place where their strongest warrior once slumbered. Ryusui visited that location, and that strongest warrior is revealed to be Stanley Snyder. Let’s look at Dr. Stone Chapter 221official details.