A Still From Ruthless S02E09 Featuring Andrew and Dikhan, Credits: Bet Plus

Andrew is in big trouble as he was close to being caught by the highest. He has his own motives and is determined to escape. Lacey and Paula, on the other hand, tried their ways to escape. But it seems like the cult and elder mothers are keeping a quiet eye on them. Brian, on the other hand, doesn’t want to be sheriff anymore. But if he is going away, he will want to take the station down if it has anything to do with the cult. Things are clearly building up for Ruthless as it approaches a boiling point. Everyone just wants to escape from the cult, which is getting a deadlier place day by day.

Tyler Perry’s BET+sereis Ruthless is currently on its second season run. The show follows the story of Ruth Truesdale trapped in a cult of sex addicts, finding a way to escape with her daughter and many others. The last episode ended quite on a note for Tally and Andrew. She tried to make up, but it seems like Andrew won’t listen. So what will go down for them in the upcoming tenth episode of the series? Here we are covering everything we can expect from Ruth Season 2 Episode 10.

Previously on Ruthless, we witnessed a messy conversation with Dikhan confronting Andrew. Especially about the missing body of the boy Andrew killed. Andrew tries to explain but only fails. This leads Dikhan to take him to Highest.  They learn that it’s Highest who went there and got the boy back home. The highest only allows Andrew to see the boy’s body to awaken him, but Andrew says he can’t be awoken. A disagreement makes Andrew leave, and Highest scolds Dikhan.

On the other side, Lacey and Paula try to break free only to be confronted by Agnes. Plus, Lynn stands up for herself as well when Brian confesses she doesn’t know how to love someone. Andrew receives the news that the boy’s body has been moved. Plus, River offers the much-needed help Andrew needs at the moment. Only to realize how rational Andrew is and different from others.

Brian confronts Mack about the problems he has and states he will request for transfer if those aren’t solved. Agnes, on the other hand, is on the verge of saving herself by forcing the girls to get back to work. Also, Brian confesses to one of his officer friends he doesn’t want to be sheriff. All he wants is to leave the town once and for all. Sheriff duty is not for him. Ruth approaches Andrew to have a talk which ends in Andrew wanting to leave. Ruth promises Tally loves him, and they need to reconnect.

The Sheriff arrives back at the precinct handling the things at the cult himself. Brian confronts him for that and threatens to shut the station down. At the cult, Ruth and Tally discuss how the cult is keeping an eye on them. Tally agrees the place is getting worst. Ruth tells how mad Andrew is. This leads Tally to finally confess about harassment.

Malcolm arrives to meet Mack and retells his version of the story. Malcolm admits to promising Sarah he will protect her. Ruth approaches River for help about harassment. River advises her to go to their elder mother. Tally tries to make up with Andrew. She informs him she is going to Highest to tell him about their love. The episode ends with a murder to investigate. 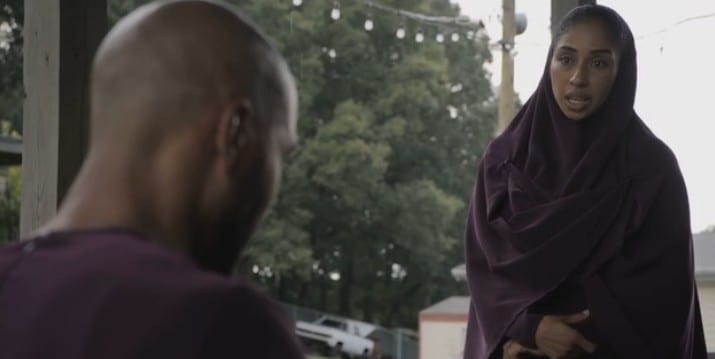 Ruth Season 2 Episode 10 is expected to release on April 30, 2021, and will be available to stream on Bet+. Furthermore, the tenth episode will also be available to buy or rent on video-on-demand services such as Amazon Prime and  YouTube TV.  As of now, there is no official promo or synopsis for the episode. You may check out the official trailer for Ruth Season 2 below and our predictions for the upcoming tenth episode.

The last episode created a new mystery for Ruth. The anonymous man who murdered someone in the end. The question is, was she Sarah, who Malcolm promised to protect? Or who? Furthermore, Ruth won’t be backing down from punishing the one who harrassed Tally. She might finally be approaching Elder mother with the news. Plus, will Andrew and Tally reconcile, and will they accept River’s help. All in Ruth Season 2 Episode 10.

Also Read: What To Expect From Blue Bloods Season 11 Episode 13?