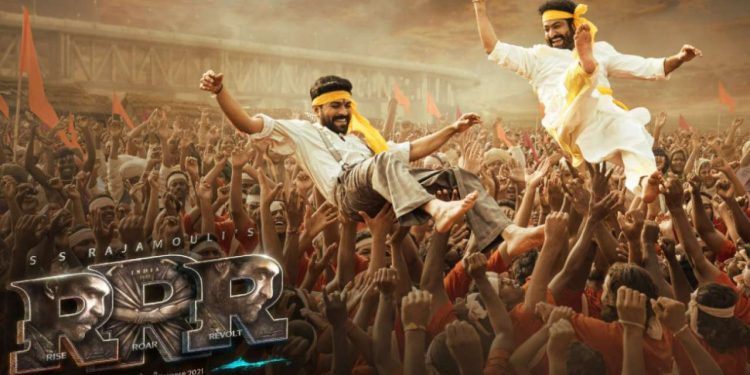 The movie poster of RRR

India has seen a recent rise in the Covid numbers as the Omicron virus strikes again. States are again aiming at least 50% lock down whereas some places have gone for complete lock down. People are quite disappointed as the public places have again closed or are only allowing 50% crowd. Amid all of this, theaters are again closing down all over the country, specifically in the metropolitan cities. For this reason, a lot of good movies that were lined up, now is, unfortunately, postponed.

RRR (Rise Roar Revolt) was supposed to be a huge Telugu movie that would be released all over the country. People were quite excited to see some of their favorite Bollywood actors in the movie. Just like Bahubali and its sequel, people were waiting that the movie might match up to the magnitude. In fact, everyone was quite excited when they got to know that the movie would be released on January 7. However, with all the Christmas and New Year celebrations, the Covid cases increased and now all the blockbusters to take wait for the next time.

On January 1, the team of the movie announced that they had to, unfortunately, that is why the RRR release date postponed. They also wanted everyone to stay safe and had announced that though postponed, they will release the movie at an appropriate time. We are presuming that once when the wave subsides, they would again try to release the movie. As of now, we do not have any information regarding when the movie could be released. Also, as the movie was supposed to be released on January 7, we can hope that the movie does not need any post-production done. Hence, once everything comes back to a bit normal, they can immediately go for the release.

The movie has been anticipated for quite a long time, and productions all over the country were trying to even not to release their movies around the time when RRR was supposed to be released.

Also Read, RRR Pre Release Event: All That Went Down, Plot & Cast of The Movie

Even before the release of the movie, it has already got a rating of 8.7/10 in IMDB. The movie has been hyped for quite some time now, and will also be available internationally. This is a huge thing for an Indian movie to be also released on international screens. Unfortunately, all the plans are to be kept in check for some time, and they have to wait until the theaters start up again.

Here is the trailer of the movie:

Though the movie has not been released yet, and we cannot exactly know what the plot is, here is a small synopsis. The film revolves around two freedom fighters (of course fictional) in the early 20th century. This period drama had got all the people and when they found out about the cast, they were more than bewildered. From the trailer, it could be understood that movie’s productions took a lot, and it is sure to be worth the wait.

Directed by S. S. Rajamouli, the movie has been cast from all over the country. It has some big names from the Telugu cinemas like N. T. Rama Rao Jr. and Ram Charan. However, what is more, interesting is that we will also find Ajay Devgan and Alia Bhatt from Bollywood, and Oliva Morris who works mostly in British movies.

The reason why the movie is also hyped is that it is Devgan and Bhatt’s debut in the Telugu movies, and they are more than excited for the movie to be released for the public.

Zee5 and Netflix have the rights to the movies, but only once it gets released. Hence, even if you want to watch the movie, you will have to wait for it to come out in the theaters and then for another 90 days for the movie to come on the streaming platforms.

Also Read, ‘Pushpa: The Rise’ Ending Explained! What Should We Expect In Its Second Part?