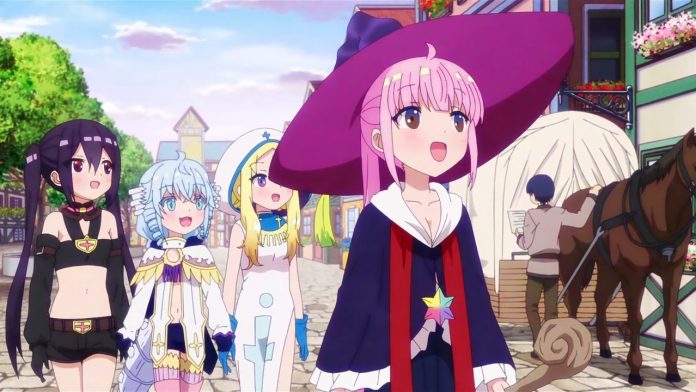 Although most people prefer anime packed with a lot of action, some of us prefer anime that are chill as well as funny. Not only this but these anime manage to make us feel calm. The CGDCT, short for Cute Girls Doing Cute Things, is a subgenre that introduces us to such vibes. There have been much anime related to this genre, the newest one being RPG Fudousan or RPG Real Estate. However, although this anime belongs to the CGDCT subgenre, it has some action-packed themes. The anime RPG Fudousan released its first episode on the 6th of April 2022. It has released 6 episodes so far. Although the anime has introduced us to most of its aspects, RPG Fudousan episode 6 dropped hints of an interesting plot twist. Thus, fans of RPG Fudousan have been anticipating what will happen in the upcoming Episode 7.

RPG Fudousan is adapted from a manga written and illustrated by Chiyo Kenmotsu. The manga’s serialization began on the 27th of July 2018 and is still ongoing. It is produced by the studio Doga Kobo and directed by Tomoaki Koshida.

Episode 5 takes an interesting turn as a new threat is introduced to the plot. This is also an aspect that troubles Kotone the most. This dragon attacked the town and disappeared. Kotone dwells on the disappearance of the dragon as well as Rufuria’s doubts that Fa must have been the dragon. However, Kotone is conflicted about this because Fa would never do something like that as she is really nice. Still, Kotone doesn’t fully dismiss what Rufuria said and decides to sleep with Fa for the night to find things out herself. When she enters Fa’s room, she watches her stand near the window and seems like a completely different person. Suddenly, Fa collapses on the floor and wakes up to reveal that she is really sleepy. When they go to bed, Kotone cannot help but think about how different Fa seemed some moments ago.

Episode 6 begins with Kotone waking up to a phone call by Rufuria asking her and Fa to come to the castle. When they reach the castle they come across many people and a gloomy Rakira and Rufuria. It is then revealed that the castle is helping people seek temporary refuge for those who lost their homes in the dragon’s attack. Due to this, they all are busy with the extra workload, causing Rufuria to become sulkier but Kotone being herself, cheers everyone up. Besides this, Kotone wanted to ask Lady Satona about Fa’s sleeping habits but could not do so as she wasn’t available. This is when Kotone hears people resenting the dragon that destroyed their homes and thinks about Fa.

Among all this, the girls help resolve a fight and end up finding a hidden basement on the castle grounds. After exploring it, they realise that this basement was huge enough as it contained many rooms for the refugees. After all this, Fa asks Kotone if they can sleep together again and hears Kotone singing a song she really likes. However, Kotone does not remember the further lyric of the song and stopped at the words “a pure white rising dragon”.

Regardless of her worries, Kotone and Fa go to work and they have to help a terrible singer get a house. In order for her to sing to her heart’s content, finding a home for her was difficult but thanks to the reaper who stole her destructive singing voice and left her with a sweet one, she was able to not only sing but also entertain others through her singing. Interestingly, she sings the same song Kotone has been singing and manages to complete the lyrics. As fans speculate, this song definitely is a foreshadowing of Fa’s connection with the dragon.

What is RPG Fudousan about?

As mentioned above, RPG Fudousan introduces us to a world where the main protagonists carry on their daily lives while making everything they do seem cute. The main character of this magical world, Kotone Kazairo, is a magician who has recently graduated from school and is looking for a place to live. She then meets the other protagonists who all are very different from each other – Rufuria is a priest, Rakira is a soldier and interestingly, Fa is a demihuman. Together they help people find homes that are suitable for their livelihood.

Where to watch RPG Fudousan Episode 7?

You can watch RPG Fudousan Episode 7, as well as the upcoming episodes, on the online streaming platform Crunchyroll.