Enter into the world of the Rookie Cops and their lives at Korea's most prestigious university. 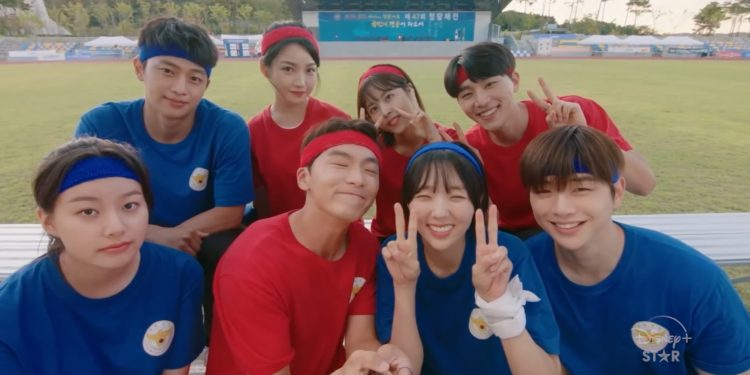 Rookie Cops is joining the list of 2022 kdramas. The upcoming drama is about individuals in a police university and how they deal with themselves and the situation around them as they head towards a different chapter in their lives. The kdrama consists of an ensemble cast that has Kang Daniel, a former member of Wanna One as Wi Seung-Hyeon, Chae Soo-bin as Go Eun-gang, Lee Shin-young as Kim Tak, Park Yoo-Na as Ki Han-na is among the main leads.

Due to its storyline, the drama is quite an anticipated one. The characters in the series are at a point where they experience new things about themselves and others. The individuals in the series are all distinctive from each other, so a lot of chaos can be expected. They all have a different perspective for joining the university, so it is quite interesting to watch how will they react when they are put in a common situation.

‘Rookie Cops’ follows the storyline of such youths who enter into one of the most prestigious and conservative universities of South Korea. Wi Seung-Hyeon is someone who always wanted to make this father proud, and that’s why he decided to enter this university. However, things do get a bit out of proportion for him when he meets his future love interest Eun-gang.

Kim Tak comes from the Judo team, and though he is kind of always alone, he does find himself a friend in the form of Wi Seung-Hyeon. Han-na is someone who loves to do her work in her way. She is the queen of her own choices, however, her extremely individualistic lifestyle does disrupt the students at the University who are accustomed to group life. The other characters also have a lot of input into the plot.

The series is about in the age where dilemma and assurance got side by side, how will they cope up with unwanted situations. The everyday fight to make oneself stand out in a crowd despite having multiple issues surely will be a fun and admirable watch.

From The Trailer Of Rookie Cops

The trailer of the series portrays the life of the rookie cops at the University. Though they go through rigorous training, the factor of fun is included extremely well. Since all the characters are so diverse, when they come together, it’s complete chaos. However, it also shows how much fun they have when they are around each other. It kind of resembles the hostel life, which is full of laughter, making memories, learning, and so much more.

Although they are at the university for police training, through each other’s company, they learn something even more important, life. Factors like love, dating, hardships come into account, and by the looks of the trailer, it’s going to be an amazing ride with epic emotions.

Following is the cast of the anticipated kdrama-

The South Korean singer-songwriter essays the role of Wi Seung-Hyeon. A headstrong youth who always dreamt of making his father proud by following his path. He even aced the college entrance exam by being first on his second attempt. According to the MBTI released in the posters, he is an ISTJ. This completely matches be person Wi Seung- Hyeon is. He is extremely loyal and forbids to shake hands with injustice. Him, following the footsteps of his father and coming to a police university agrees to this fact as members from this personality type tend to work in organized sectors where order and discipline prevail.

Kang Daniel was last seen as a television host in Street Women Fighter. Now with Rookie Cops, he will make his acting debut. People are excited to see his performance, and surely it will be great to watch him on screen.

The Strongest Deliveryman actress portrays the role of Eun-gang, who has a different motive for entering the police university. Extremely courageous, she wanted to go after her one-sided love. Eun-gang falls under the personality type of ESFP. Given the fact she came to a police university just to follow the person she loves, it is something. People belonging to this personality type are spontaneous and speak their hearts out. They try not to have a dry moment and keep everyone entertained by being the center of entertainment. Both ESFP and ISTJ are opposites of each other. It certainly will be an interesting watch as to how Eun-gang and Wi Seung-hyeon acts in their relationship.

Lee Shin-Young plays the role of Kim Tak, a young soul, however, doesn’t have many friends. Although, things do change at the university when he meets Wi Seung-Hyeon. A passionate individual, he is a freshman from the junior nation judo team. Kim Tak has the ISFP personality type, someone who likes to keep themselves within a small group than hanging around with lots of people. Kim Tak had a very small friends circle, which included Wi Seung-Hyeon.

Those who were missing Kang So-jin, here she is. Park Yoo-Na is back with her portrayal of Han-na. An independent personality, she is used to being in the first position. However, this attitude of hers brings a difference between students in the university who are used to being in groups. Han-na is independent and has the personality type of ISTP. People from this group loves to work in their own space, this reflects her personality extremely well as people around her at the university had a difficult time adjusting around her as they believed in group culture. However, sometimes they do sound insensitive as they believe in a practical approach rather than something emotional.

He played the role of Yoo Dae-il, who went into the university after getting inspired by a kdrama named Signal. His personality type is ENFP. Outgoing, being open-hearted are some of the qualities the people from this personality type possess.

Seo Beom-Joo, although is upright, however, overthinks a lot, and he always goes by the books. His personality type is ESTJ. These people follow traditions to bring family and relations together. They cherish the feeling that comes from staying together.

She played the role of Shin Ah-ri, who is kind of the face of the university, though for her it was not the first impression is the best impression thing at the university, however slowly she became close to her classmates. Her MBTI is INFP. People of this type love to daydream and live in their world, and they are passionate individuals.

Apart from them, there is Jung Soo-bin as Baek Seon-yoo, who participates in a lot of activities at the university. These are some of the few names among many others in the drama.

When Will Rookie Cops Kdrama Release?

The upcoming drama will be airing from 26th January 2022. It is scheduled to release per week on Wednesday. It can be available for streaming online.

The drama already has a lot of anticipation, and we can’t wait to view it.

The drama will go on air on Star via Disney+. This makes the drama the first Korean series to be available for streaming on this platform.