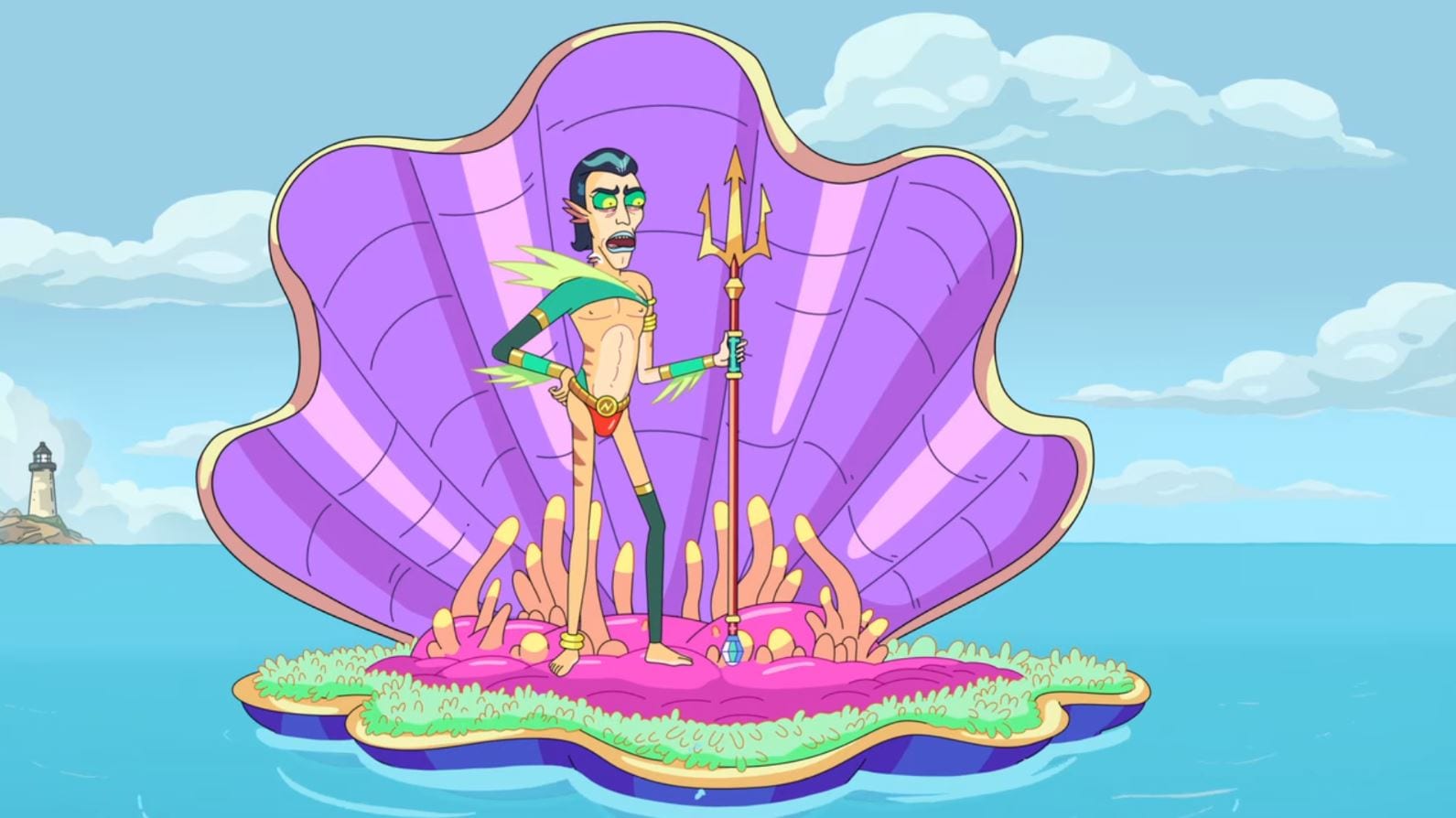 Rick and Morty Season 5 Episode 1 is a delight to watch as here we are to get its ending explained. Rick and Morty is part of the Cartoon Network’s night-time block under Adult Swim Programming that has returned to streaming channels (Netflix, Hulu, and YouTube TV). Here, we follow the gimmicks of the grandfather-grandchild duo of Rick Sanchez and Morty Smith. Rick is a selfish cynical scientist while Morty is a seemingly good kid. And both spend their time embarking on interdimensional missions headed by Rick. And this seems to be working with the viewers as the show has become a hit. This can be identified by the fact that back in 2018, the show got renewed for 70 new episodes. Considering that each season has 10 episodes each, which should witness a total of 10 Rick and Morty Seasons in the coming years.

Rick and Morty Season 5 is no different from the duo’s previous escapades. The season premiere starts off with Rick and Morty surviving a battle on a distant planet. As they get back on their ship and head towards the Earth, Morty loses control as they start hurdling towards the ground. So before he crashes, he calls Jessica to reveal his true feelings towards her. But astonishingly, she was glad that Morty called her up and even asked him to hang out. Now that Morty was rejuvenated with a new purpose to live, he manages to save himself and Rick by landing their ship on the ocean. But just then as Rick wakes up, he is worried about the fact that they landed on earth’s ocean. That’s when a man appears from within the ocean claiming to be Rick’s nemesis, Mr. Nimbus, King of the Ocean. 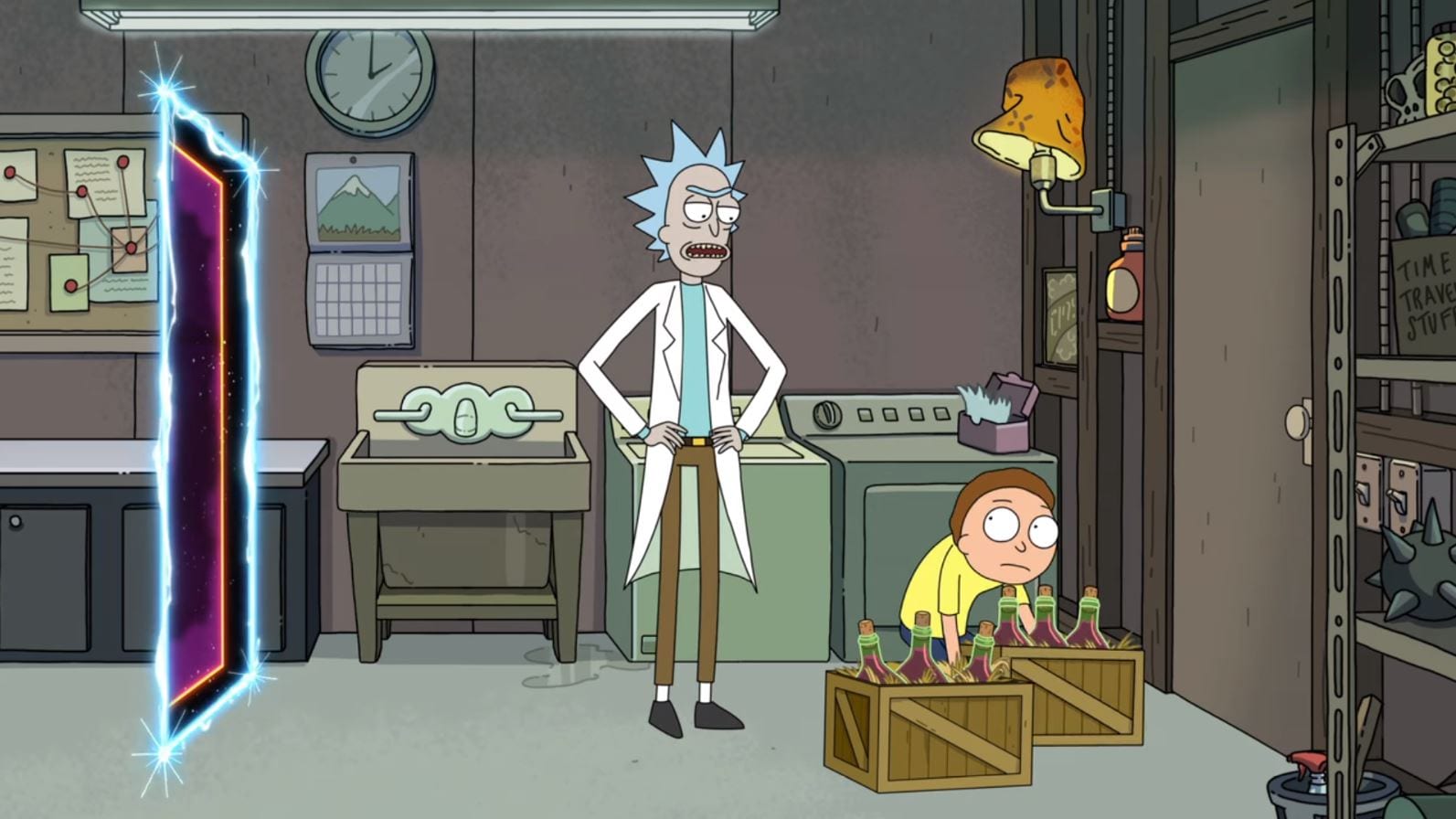 Rick and Morty preparing the wine.

What Happened in Rick and Morty Season 5 Episode 1?

Rick and Morty Season 5 Episode 1 titled “Mort Dinner Rick Andre” primarily focuses on Morty. After Mr. Nimbus is seemingly enraged that Rick was on his ocean, he was coming to their place to sign a treaty. And while Nimbus would be at their place for the treaty Summer, Morty’s sister was to attack Atlantis and steal a horn. During this, Morty is tasked to arrange the wine for the low-budgeted Aquaman. So that the wine they provide Nimbus is aged well, it is thrown into a portal in which time is supposed to move faster. So sometime in the real world would account for centuries within the portal. Just as Nimbus arrives, due to some heckling by Jerry, Rick’s dad, we learn that Nimbus has the ability to control policemen. And as he enters for the dinner, Nimbus invites Jerry and Beth for a sexual encounter.

Just then, even Jessica arrives at the Smith’s place, and Morty takes her to his room. But before Morty was to engage in his activities, Rick asked him to bring the wine back from the portal for Nimbus. When Morty takes Jessica to his room, unknowing of what to do, Jessica asks if Morty can bring some extra wine over for her. So, Morty quickly heads into the portal and meets an anthropomorphic dog named Hoovy, who helps him to carry the crate of wine back to Earth. During this, we see that Hoovy’s wife Bova was pregnant. When Hoovy returns, Bova had died ages ago while his son who had sworn to avenge her kills him. As Hoovy dies, he tells his son how it was all fault of the boy from the portal. 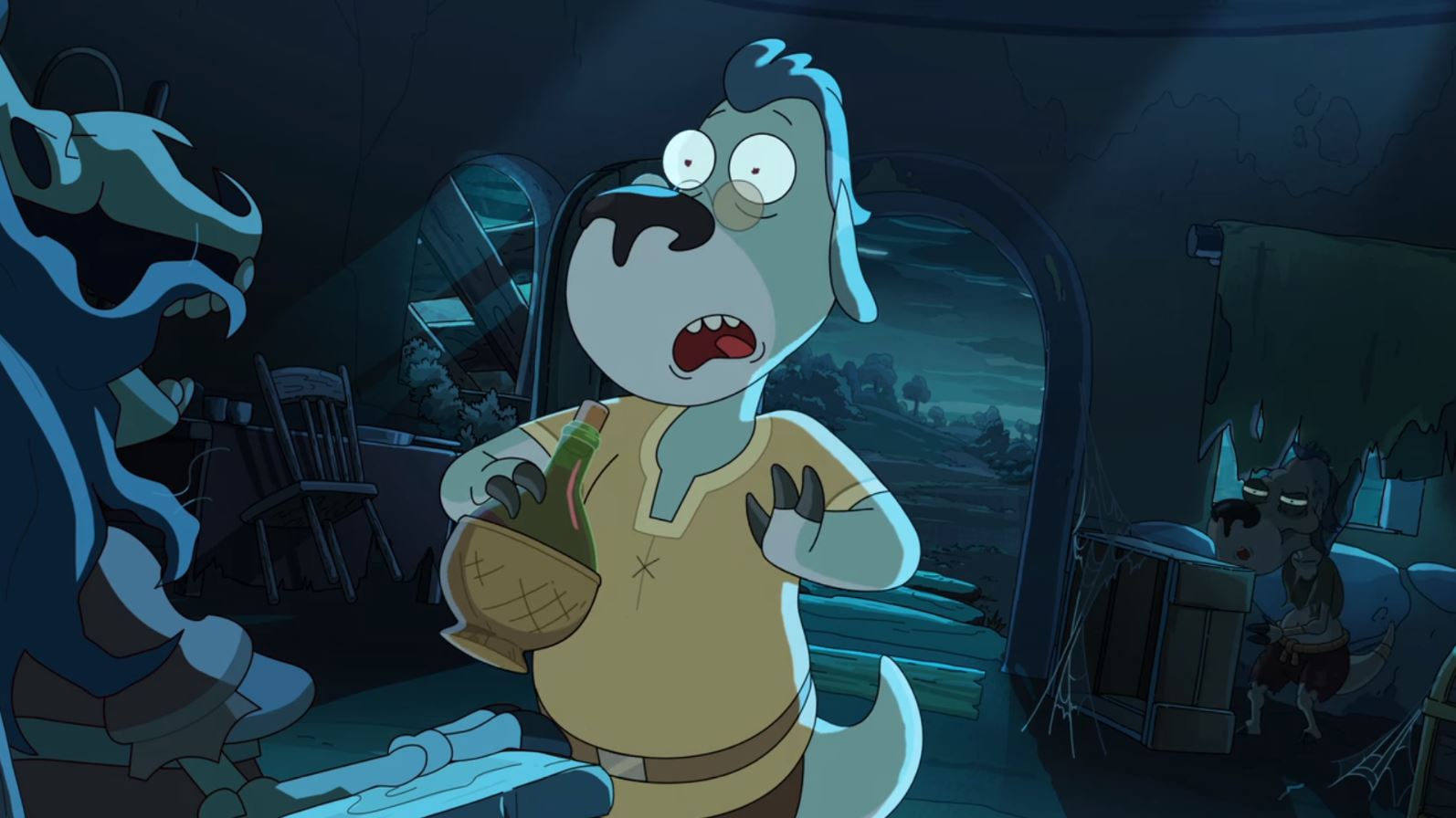 Hoovy back at his place.

Also Read: When Does Rick And Morty Season 5 Come To Netflix?

Morty now has two bottles of wine, both of which he ends up serving to Nimbus. So, with none to bring back to Jessica, Morty heads back into the portal. Now, Hoovy’s son had grown up and become fully jacked up. He had sworn to take revenge on the portal kid and thus beats up Morty. Morty runs back to his portal but soon enough reenters it. This time the creature had grown up to be old and dad to his three sons. Morty kills him, taking the wine with him. The three sons had witnessed the murder firsthand and now had started building defenses to fight imminent danger. They built a castle with soldiers at the spot and had now grown up to have children of their own. Meanwhile, the wine that Morty takes over for Jessica gets spilled, and he again enters the portal. 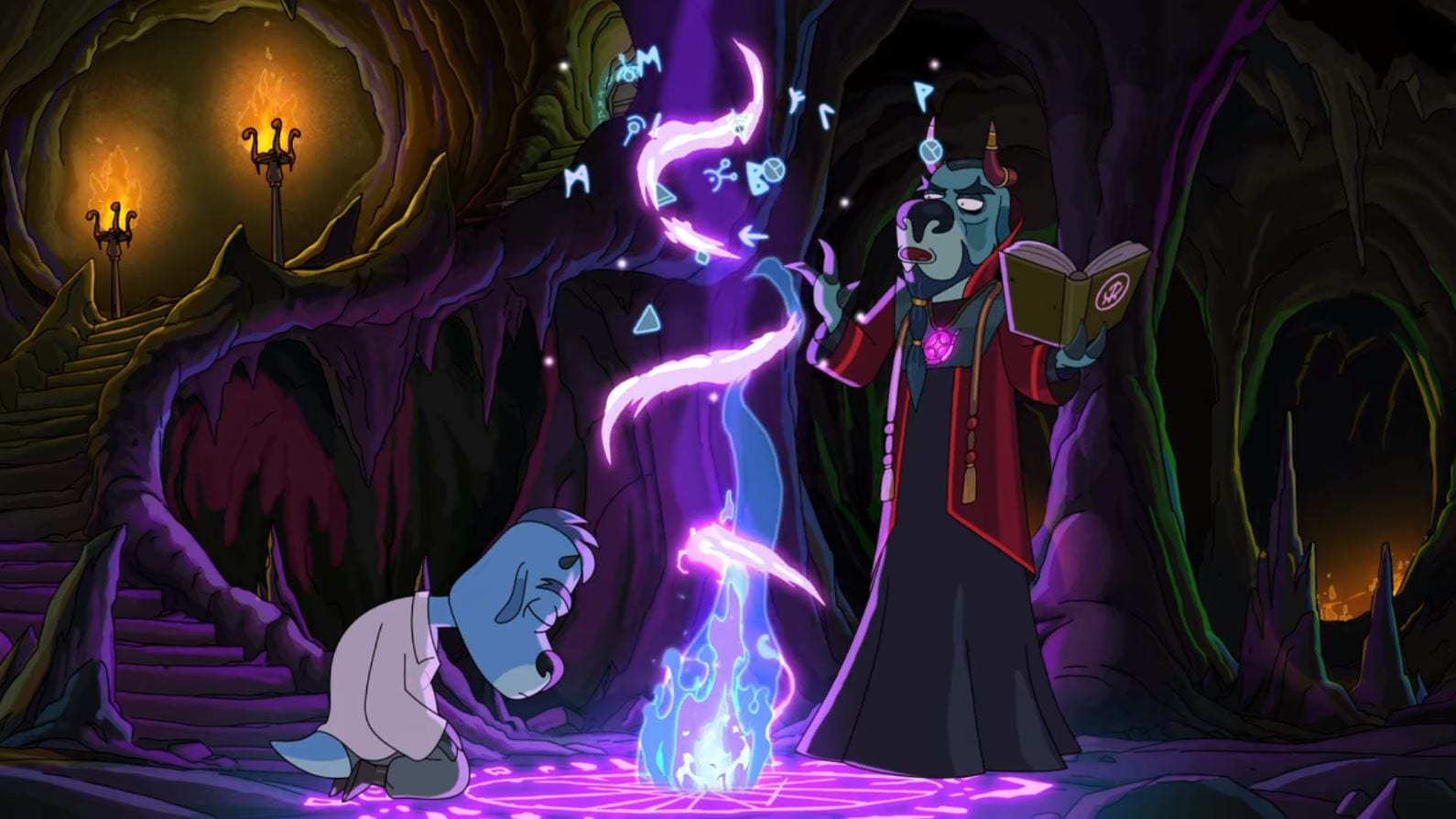 Making use of their defenses, the Hooves are able to make Morty flee. Years have passed as a youngling in the Kingdom tries to defy his father. He believes that they are investing their time in a prophecy that was a hoax. He is thrown out of the castle hall as another elder takes him under his wing. The kid is experimented on and starts training daily to one day attack his father. But as soon as he kills his father, he is backstabbed but son enough, Morty comes back with added artillery to kill all of them. Morty takes over two more bottles of wine, one for Nimbus and the other for Jessica. He and Jessica kiss, after which Morty goes over to fetch an opener for the bottle. During this, Rick heads to Morty to bring him as a witness to the signing of the treaty. 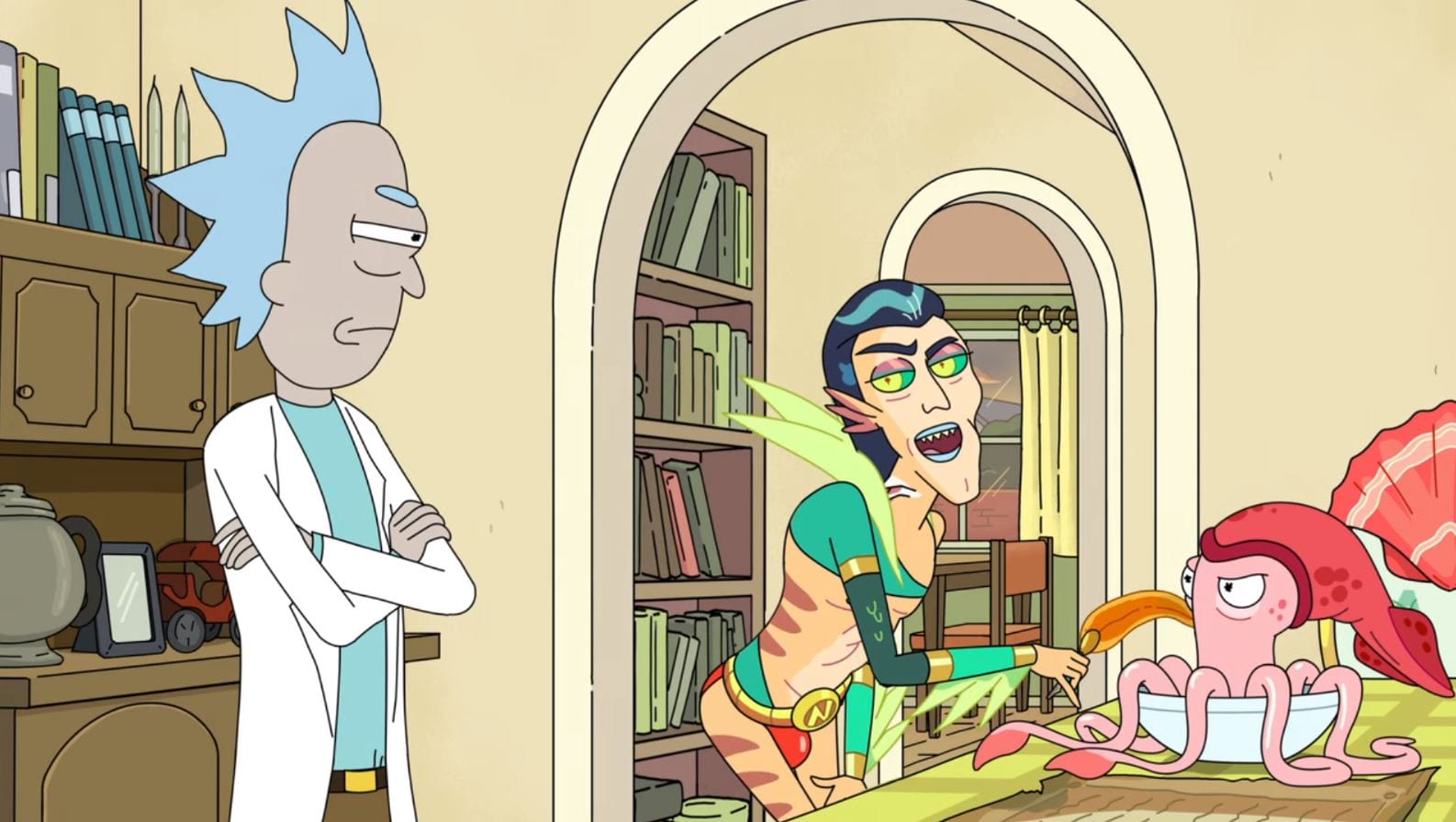 What Happens In Rick And Morty Season 5 Episode 1 Ending?

A new agent, Adam, is being trained back at the Hoove Planet. He is the one tasked to travel through the portal to the Earth and kill Morty. After years of training and suited up in a Bane-like suit, Adam comes to the Earth to avenge his planet. Here as he is attacking Morty, he ends up killing Nimbus’s eyewitness. And just about as he was about to kill Morty, Jessica saves him by pocking a hole in Adam’s suit. Adam dies, but due to some reason, Jessica is pulled over to the portal and travels to Hoove. And again, Morty heads into the portal equipped with a gun. This time, Morty is deceived in a Star Wars kind of arrangement, after which he is captured off-guard. He is questioned by one of them, during which the now cyber-anthropomorphic dog reveals Jessica, who has been captured within a crystal. 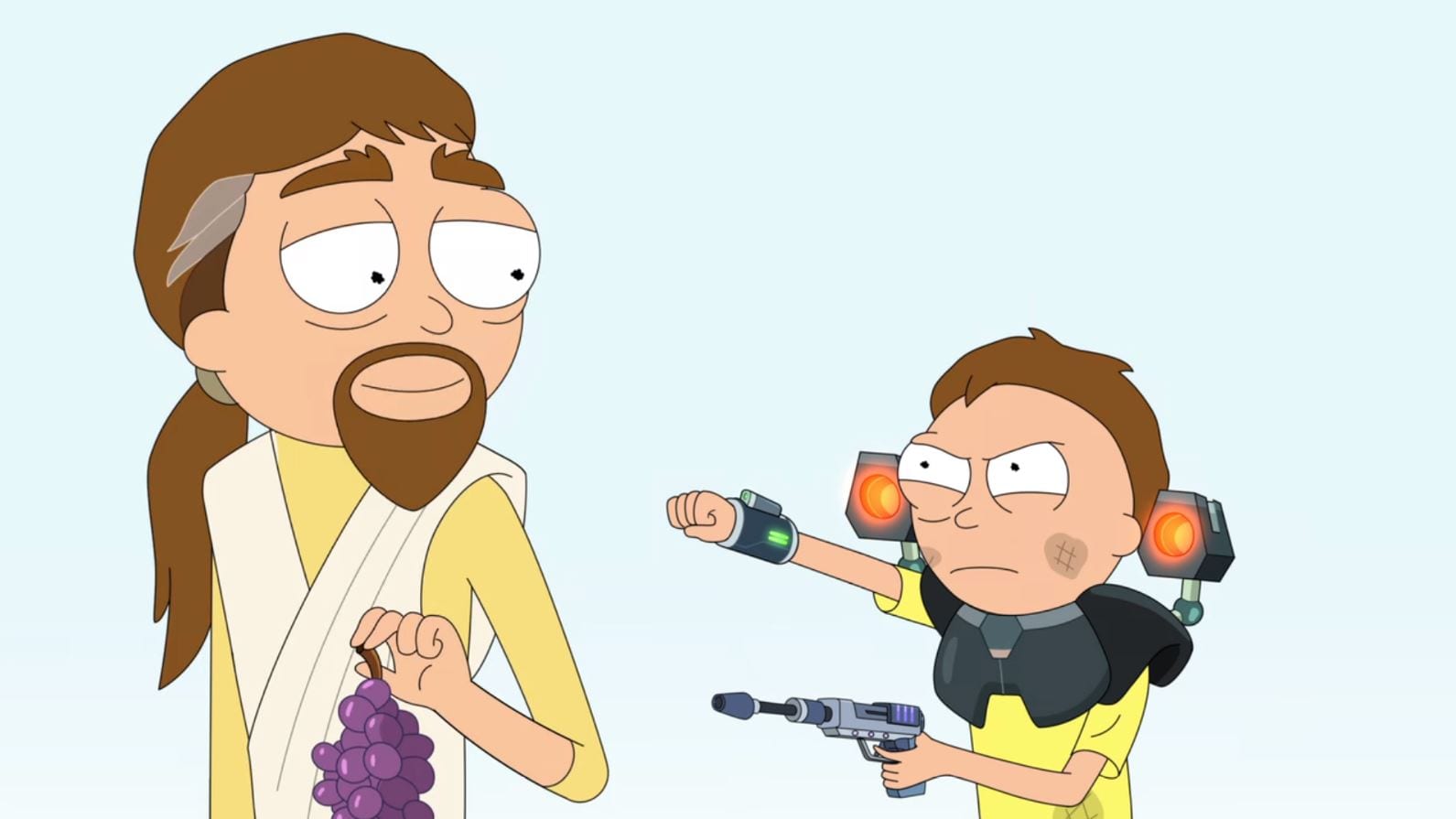 Morty has had enough as he frees himself to attack the dog and free Jessica. Both of them make a run back to the portal, during which they are caught. Meanwhile, Rick was seeing Nimbus off to the door, during which we learn how both of them had a history of friendship and rivalry. Hearing Morty’s voice, Rick heads over to the portal but is instead sucked into it along with Morty and Jessica. While Rick was astonished by the level of development in Hoove, he was not surprised that Morty had messed up. Rick’s confidence to survive the planet is soon diminished as he witnesses how far into the future had their technology grown. Just then, Nimbus comes to the rescue, summoning a huge tide to wash away the city.

Are Rick And Nimbus Friends Now?

By the ending of Rick and Morty Season 5 Episode 1, it is well explained that Rick and Nimbus have some past. Nimbus even knows of Rick’s late wife Diane and how he has changed after his death. After Nimbus saves him, everything seems well as Nimbus declares that they no longer had a war between them. Just then, Summer returns from Atlantis with the horn. Seeing that Rick betrayed him, Nimbus starts beating up Rick. Summer who had no clue what to di starts blowing on the horn instead of destroying it. But this only makes Nimbus jacked up to make him have an even bigger advantage over Rick. After Nimbus thoroughly beats up Rick, he commands the police officers to arrest him. And at the end of the episode, Jerry and Beth have cold feet for their agreement with Nimbus but go along with it anyway. 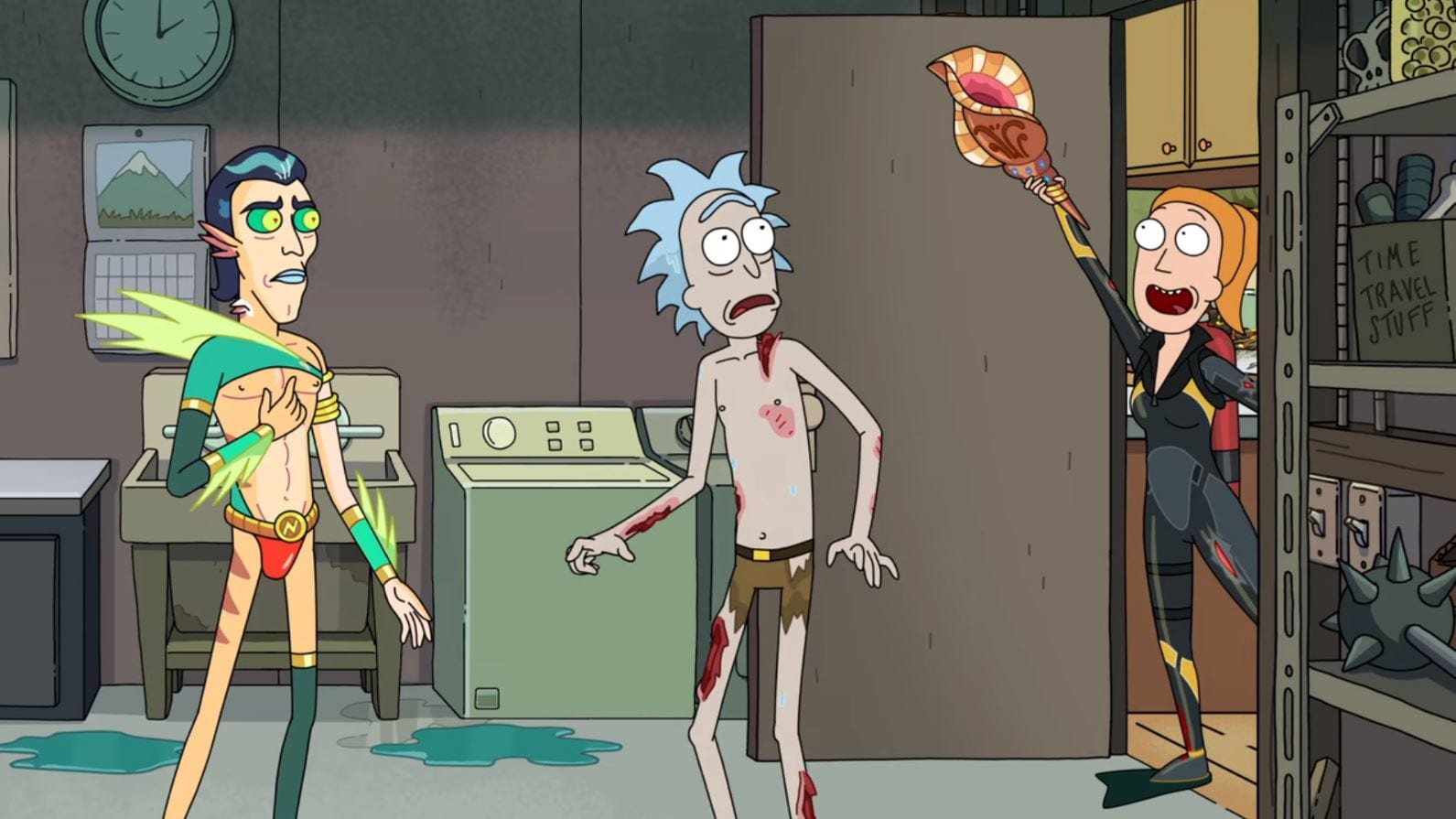 Summer coming back with the horn.

What Happens To Jessica?

When Jessica was captured by the Hooves, she was trapped in time itself. She experienced madness and enlightenment over and over. Jessica had become time itself as she was witnessing time pass in front of her with nothing significant occurring. She had the vastness of time but no purpose. And according to her, time without a purpose was a prison. Jessica feels that she had glimpsed into eternity or the mind of God, but all she witnessed was silence. Due to this, she decides to be just friends with Morty for now. 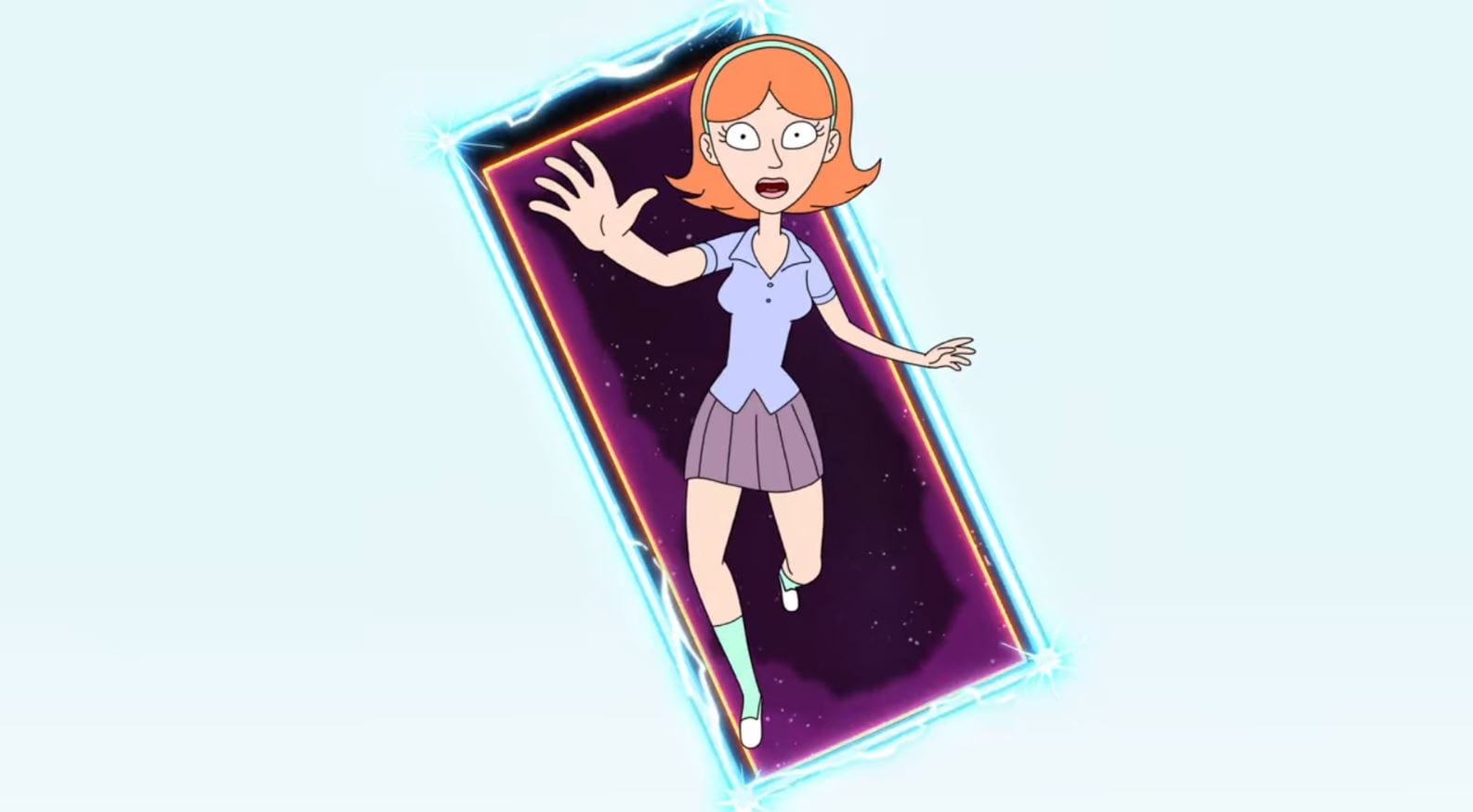