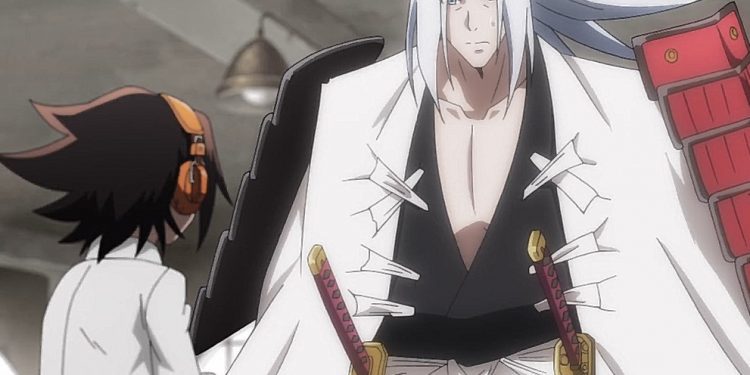 Shaman King (2021) Episode 35 reveals Anna and the future Shaman King’s new journey after solving Anna’s problems with demons. That happened after Asakura Yoh used Ultra Senji Ryakketsu: Cresent Moon Purification that killed Demon Re. The Shaman Fight will continue soon after Yoh decides to enter again since he has quit after learning to lose more of his precious friends. The anime reveals Yoh’s past after Peyote and Chubby Shaman defeated Ren. The episode begins with Yoh and Amidamaru talking about Matamune.

Matamuna sacrifices his life for Yoh to protect Anna. Asakura Yoh also reveals that he has learned that Hao was Matamune’s master. They think they have enough time to talk about it since Yoh feels free after quitting Shama Fight. Amidamaru recalls when Ren gets injured and realizes that Yoh has decided to help Ren and abandoned his dream to be the Shaman King. Asakura Yoh thinks that those were pointless battles, but he has things that he has to do. Anna arrives and asks Yoh if he is thinking about defeating Hao.

She reminds him about the promise that he made with Matamune. Asakura Yoh knows that with the help of Anna, he promised Matamune that he would defeat Hao in a Shaman Fight. Anna thinks that they can’t let Matamune’s death be in vain. She asks him what will happen to her since she is supposed to be the wife of a Shaman King. Asakura Yoh apologizes and gets that slap. He rolls on the ground, and Amidamaru pities for him after noting that Yoh has begun to bleed. Ren’s reincarnation will begin when they reach the HQ and meet with the Maiden, who promised Yoh that she would help.

Amidamaru realizes that Anna will never stop slapping Yoh if he makes a mistake. Anna sends Yoh flying with a single slap and tells him that she had forgiven him since he was soft-hearted when they started. She reveals that Yoh’s innocence made her fall in love with him. But he must know that it is not over until he becomes the Shaman King. Anna leaves the building, and Amidamaru smiles that she has forgiven Yoh.

Marko and the X-Laws arrive at the HQ and tell Maiden that Ren’s revival is ready. Basson gets angry when Marko thinks they should not reincarnate Ren but bury Ren. They seize Basson, and the X-Laws reveal that they cannot spare Ren since he has killed one of the ten Officiant to get the Oracle Bell. They know that a Shaman pays with their life; Lyserg thinks it is unfair since they have promised Yoh that they will revive Ren. He knows that Yoh won’t like that idea. Marko reveals that the X-Laws are the Apostles of Justice, and they cannot allow such Ren to get away after doing such an evil act.

He thinks it will be better to send Ren to the graveyard, not the reincarnation room. The Maiden reveals that she promised Yoh that she would revive Yoh. But she will never break that promise, and Marko accepts that after the Maiden explains. Marko is touched by her speech and apologizes that an evil spirit blinded him. They begin with the process, and Ren has dreamed about Shaman Fight. In his dream, he saw himself overwhelming his opponent with news powers. Ryu and Manta arrive at the scene and realize that Ren will wake up.

Shaman King (2021) Episode 35 will be released on 9 December 2021. Ren wakes up after the reincarnation process, but his bossy attitude has not changed. He scolds Ren for arriving late since he will never lose a single battle. The IceMen encounter Hao’s Men. Let’s look at Shaman King’s (2021) Episode 35 latest news and official details.

Also Read: Will The Makers Reach Their Labyrinth’s Destination In Episode 10 of SAKUGAN?.