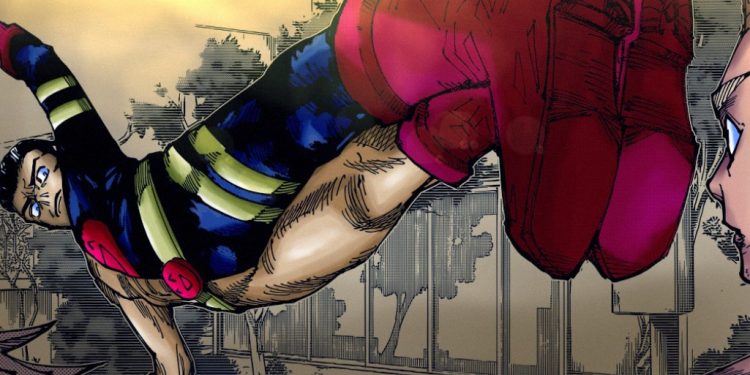 Reggie, Hazenoki vs. Fumihiko and Megumi begins in Jujutsu Kaisen Chapter 170. Fumihiko has recently joined the Culling Game with zero points and decided to help Megumi beat Reggie and Hazenoki. Megumi almost gave up on getting points since he trusted Yuuji, but after defeating a sorcerer, he earned five points. He knew that Yuuji would never disappoint him since they had the same goal and would meet soon. Jujutsu Kaisen Manga has delayed chapter 170, so we will be looking at the recent updates. In the recent chapter of Jujutsu Kaisen, Fumihiko allied with Megumi since Reggie’s offer is not attractive.

Megumi noticed that Fumihiko was hurt, but he is glad that they are potent sorcerers. The two talk about something, and Megumi accepts Fumihiko since he saved him from Hazenoki’s killer blow. Reggie talks with Hazenoki about Fumihiko’s skills. But Hazenoki knows nothing about Fumihiko. Hazenoki asks Fumihiko who that guy is, and Fumihiko gets furious since they are underestimating him as a top sorcerer. He told them that they would know him when he beat them. Hanezoki notices that Fumihiko has weird costumes and wonder which Era he comes from.

Fumihiko reveals that his costume resembles a Superhero who saved him and wearing that costume makes him want to brutalize them till death. He decided to crack a joke that they would use to propose their crush. Reggie told Hanezoki to get ready since the joke wouldn’t be funny and ruin their day. Fumihiko stretched his legs, hands like a dancer, and said, Marry me and Be My Wi-Fi. They both realize that it is one of those lame jokes and show weird faces due to disappointment wondering who cracks such jokes in this Era.

Fumihiko continues to crack lame jokes, and Megumi thinks that Fumihiko will give them a headache with lame jokes. Megumi realizes that Fumihiko reminds him of someone who helps Yuuji and has a oneliner:  “Best friend.” Fumihiko jumps and smashes Hanezoki’s face after landing a dropkick. He reminds him that he is an entertainer. But Hanezoki was not prepared for that since he saw Fumiko dancing and thinks it was part of his lame jokes, and he has realized that he paid the price. Reggie admits that Fumihiko is faster than he knows.

Fumihiko uses his hands to walk forward while his feet dance midair and says he was once an old-schooler performer. Reggie admits that Fumihiko has worse jokes, but he is honest. Fumihiko’s hand emerges below Reggie, who overlooked that. But Reggie moved and almost got knocked out by Megumi’s punch. Fumihiko told Megumi to lure the two to different areas due to the curse technique of exploding body parts. Kogane joins and talks with Megumi about Hiromi Higuruma’s stats.

Megumi realizes that there is a new rule: Rule Number 10. He knows that Yuuji adds that rule after dealing with Higuruma and getting his points; Megumi knows there is no need to fight since Yuuji has completed the mission. He told Fumihiko to retreat since he has no longer interested in Colony. But Reggie hesitated, and Megumi told him that he wouldn’t kill him if he cooperated. Fumihiko decides to handle the rest and tells Megumi to leave since he has unfinished business with Hazenoki. Hanezoki uses an Eye Ball Technique, but Fumihiko is a ballerina dancer. Fumihiko likes Hanezeki’s Danger Technique. He uses explosives against Hanezoki, and Megumi wants Fumihiko to win no matter what happens during the fight.

Jujutsu Kaisen Chapter 170 will be released on 3 January 2022. Fumihiko and Hanezoki exchange massive punches. But Hanezoki loses focus, and Fumihiko hits him below his belt. Hanezoki pretends his balls are made out of steel even though he feels pain and continues to fight and is angry why Fumihiko pulled a childish move. Fumihiko lands another strike that sends Hanezoki flying and realizes that Hanezoki is finished with that one.  Let’s look at Jujutsu-Kaisen-Chapter 170 official details.

You will be able to read Jujutsu-Kaisen-Chapter 170 online on Shonen Jump’s official website. Jujutsu Kaisen will return since chapter 170 was delayed, but the recent chapters and latest news are serialized on Shueisha’s online magazine & VIZ Media every Sunday. Fumihiko believes that he has beaten Hanezoki and tells Megumi to meet soon. Reggie jumps in front of  Megumi and sees that Hanezoki is dead.

Are Madelyn Cline And Zack Bia Dating? All About Their Relationship