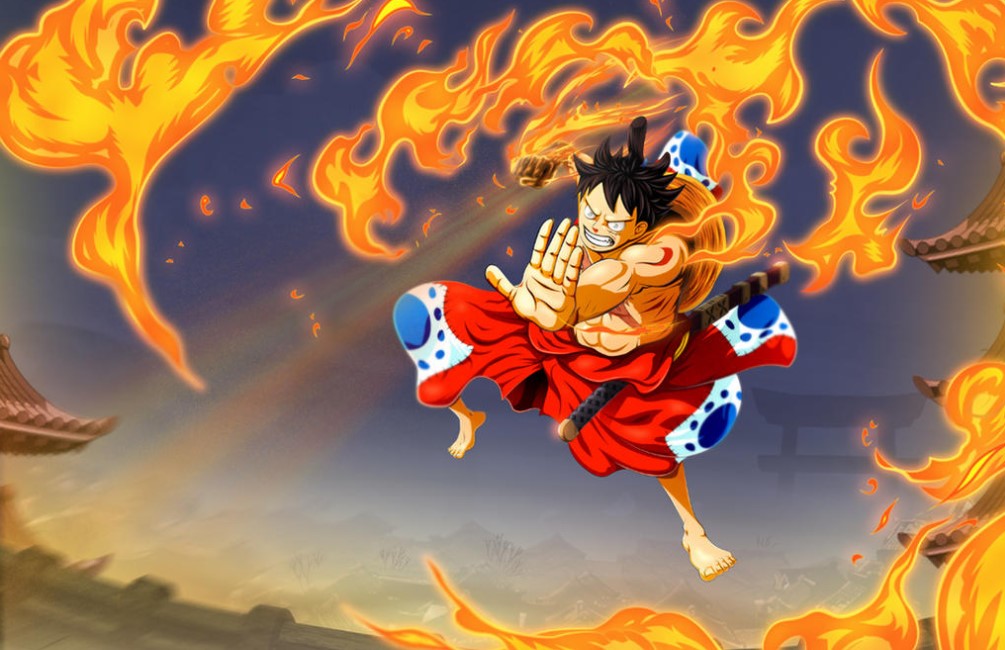 In the last chapter of One Piece, the truth of the mysterious shadow has shocked The Red Scabbards. This week One Piece 1009 spoilers are out, we are getting there but first a recap. They thought it was real that Oden is alive. But it was Kanjuro who fooled them, and they fall for it except for Ashura. When they find that it is Kinjuro, Ashura decides to end the Kanjuro’s act. He told Kanjuro that he would pay for playing with Oden’s honor. Kin’emon decides to join the battle, and he told other members of The Red Scabbards to leave. One Piece is title Hell the update continues below.

Kanjuro comments that he will pierce the heart of Kozuki’s clan. The Red Scabbards realizes that he is referring to Momonosuke. Kin’emon warns Kawamatsu and others to inform Shinobu and Yamato. They both left the battlefield while Ashura clashes with Kanjuro. Kin’emon faces Jack and comments that he will end his rampaging and distraction. Meanwhile, at Momonosuke’s side, Shinobu and Yamato are heading with him somewhere. Yamato wishes to fight alongside the Straw Hats.

Yamato said she wishes to help Luffy face the two Beast Pirates. She is not worried that she won’t be able to see Kaido being taken down. Momonosuke wishes that his dragon could help during the battle. Shinobu console Momonosuke while Luffy and the three captains witness Kaido’s new Hybrid Form. Luffy has unleashed Gomu Gomu No and comments the two Beast are like any other humans; they can feel pain. Kaido smiles and comments that the Straw Hat is on fire.

The Red Scabbards vs. Orochi 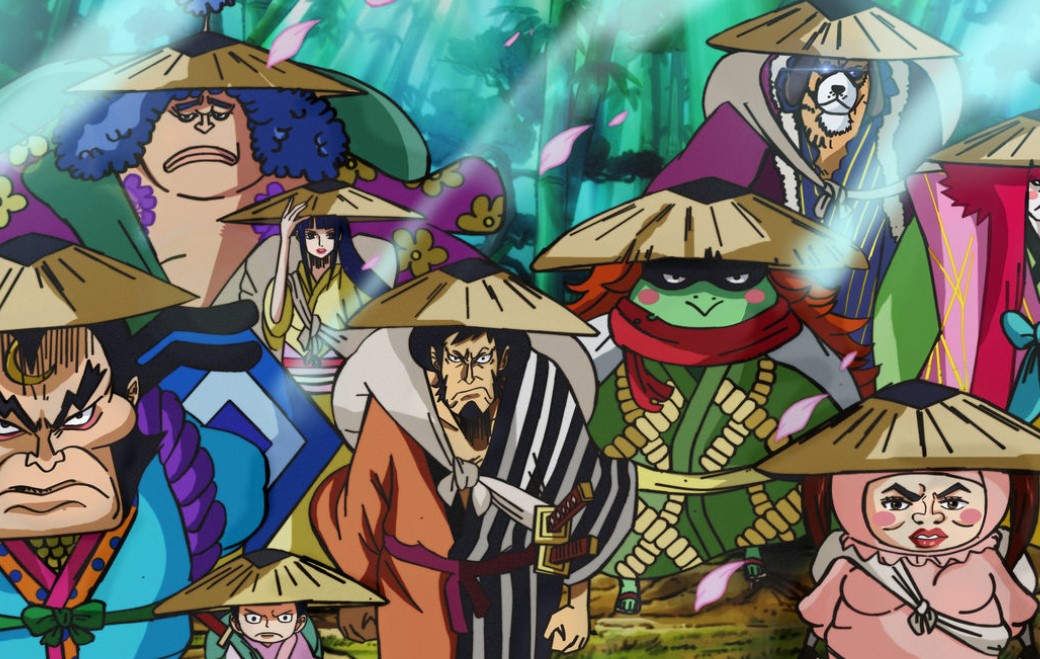 In the present day, Orochi was trying to flee, and he encounters The Red Scabbards. But he noticed that they are injured, and he considers the weaklings. Orochi smiles, thinking that the tides are in his favor; he gained confidence that injured weaklings can’t beat him. He vows that he will thrash The Red Scabbards and walk away with the victory.

The intense battle between The Red Scabbards and Orochi began. Orochi started to receive massive blows. He was stunned by The Red Scabbards’ fighting skills. He wonders where they are getting stamina to fight since they are severely injured. But it didn’t take long for the battle to end. The samurai smashes Orochi and slice him, and they thought that they had finished him. But he was half-dead, and he regenarate and transform into his six-headed monster’s beast.

The Red Scabbards realize that fighting with Orochi is a waste of time. He is also not a worthy opponent since they can kill him multiple times. But Fukurokuju attempts to clash with The Red Scabbards. Meanwhile, at Onigashima, the fierce battle continues. It’s two Beats Pirates against three captains and one swordsman. Captain Kid asks Trafalgar Law if he can separate Kaido and Big Mom using his powers. Law replies that if it was possible, he would have done it a long time ago.

We have also shared a post on One Piece 1009 Release Date. 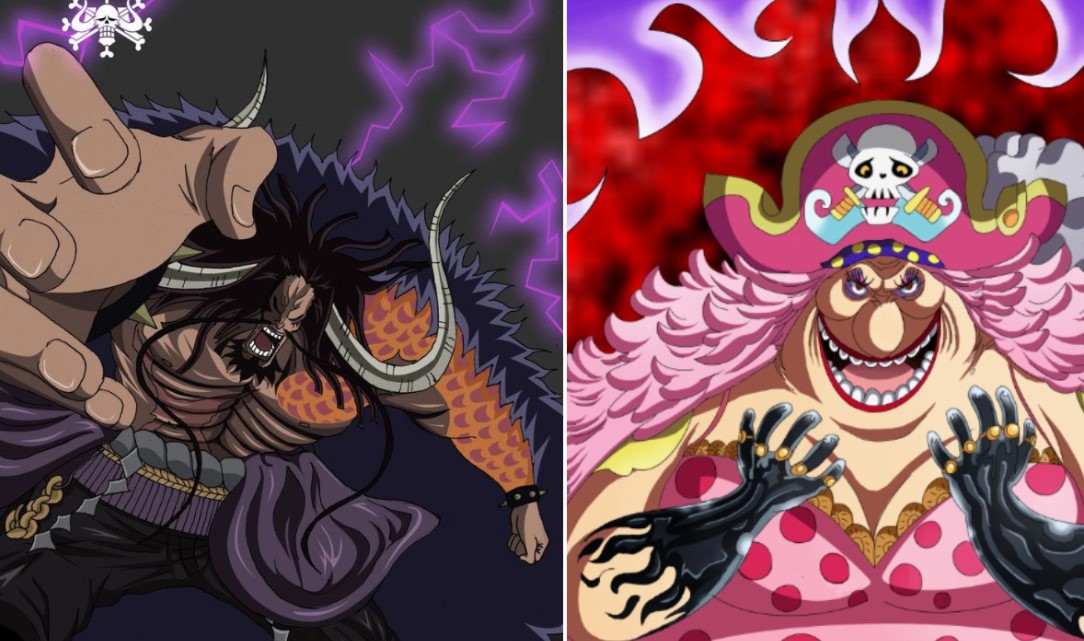 Law reveals that Kaido and Big Mom possess strong Haki, making it difficult for them to be separated. Luffy warns the trio to watch out for the beats coming toward them. Kaido and Big Mom unleashed an attack called Hakai at the same time. They combined their Hakai. But Zoro rushes in and blocks the attacks using his swords. Zoro is left injured after Kado and Big Mom’s super move vanishes. Luffy, Law, and Kid have managed to survive the attack, and Captain Kid thanks an injured Zoro for his effort.

Luffy gets furious after seeing that his comrade has been hurt. He attracts back with Gomu Gomu No: Fire Red. But Kaido blocks the attack using a  lightning bolt from his mouth and sends the Gomu Gomu No: Fire Red away. They started to exchange powerful blows, and Kaido attacks again with  Hell of the Three Realms using his Kanabo. At the same time, Law teleports Zeus inside a metal box created by Captain Kid. He uses shambles to perform teleportation. Zoro also joins the battle and slashes Prometheus.

While Killer smashes Napoleon, Big Mom questions Captain Kid if he can defeat her because she is bare-fisted. She didn’t wait for him to respond, and she slams him with the ground. She continues to showers Captain Kid with massive blows. But he managed to blow her away using his metal attacks. Big Mom receives a powerful blow from Captain Kid and is sent far away, where she lost her footing. In the end, Big Mom was spotted falling away from the island to the sea.

One Piece Chapter 1010 Release Date and Where to Read Online

The summary below is unedited and given by u/gyrozepp95/

Luffy appears on the cover of Weekly Shonen Jump #18, holding his hat while sakura petals fly around him.

In the Color Spread, the Straw Hat pirates are playing in the snow with Otama, Komachiyo and Bunbuku (the kettle that ate Inu Inu no Mi model Tanuki).

The fire is still spreading inside Onigashima castle. The Red Scabbards run into Orochi and Fukurokuju on the way, both are shocked.

In an epic double spread, the Red Scabbards cut all of Orochi’s head at once. Kinemon says they have no time to waste with him (he’s implying that Orochi is not dead yet?) so they will leave his judgement to hell. The Red Scabbards continues on but Raizou stays to fight Fukurokuju.

Raizou: “I have misjudged you. I didn’t expect you to fight for such a fool to the very end.”

Fukurokuju: “I could say the same about you. It is fate that we will have to fight each other at last, Raizou!”

Cut to Onigashima rooftop. Kid asks Law why he can’t just transport one of the Yonkou somewhere else. Law replies that he’d do that long ago if he can, but their Haki is too strong so he can’t move them anywhere.

Big Mom suggests to Kaidou that they attack together and finish all Supernovas in one blow.

Kaidou: “I hope your legs and hip are still good enough, old hag!!”

Big Mom and Kaidou use a massive combined attack, they swing their weapons at the same time and send massive wave at the Supernova which is too fast for any of them to dodge. However, Zoro blocks the attack with his swords.

Big Mom and Kaidou attack destroys part of the island. Law transports Zoro out in time so he survives but is heavily injured. Kid thanks Zoro for managing to slow down the attack even if he managed to do it for 1 second.

Luffy immediately jumps again and uses “Gomu Gomu no Red Hawk” at Kaidou, but Kaidou dodges it before Luffy can complete the attack. Luffy smiles.

Luffy: “So you have to dodge it because this can actually hurt you, right?”

Kaidou hits Luffy with his Kanabo. Luffy is thrown away but he manages to block the Kanabo with haki-cladded arms. His arms hurt but Luffy is still fine. Kaidou follows up by shooting a beam from his mouth at Luffy that dodges it. Then Kaidou jumps up and uses “Kouzanze Ragunaraku” (降三世 引奈落 Three-world Ragnarok) an attack where he spins his Kanabo around with a lot of black thunder coming out before striking down on Luffy.

Back to Big Mom Vs. the other Supernova. Kid creates a metal box then tells Law he is ready. Law then uses “Chambres” to transport Zeus into the box.

Killer and Zoro (that is still coughing up blood) then attack together. Zoro uses “Homurasaki” to slice up Prometheus while Killer attacks Napoleon, separating both of them from Big Mom.

Big Mom: “Do you think you can win just by separating them from me?”

The arrows don’t work on Big Mom at all. She then punches Kid down to the ground. Kid takes Big Mom punch in full but he then grabs her arm and uses “Repel”, bouncing Big Mom’s body up into the air. Law then uses “Takt” to throw a huge rock at Big Mom.

Big Mom: “Why do you still think these rocks can work against me?”

Then Big Mom realizes that the rock has pushed her off the edge of Onigashima, and below her is only the sea. Big Mom then summons Zeus to help her, but Zeus is still trapped in Kid’s box.

Law: “If we manage to stop them from helping her, then there’s one player off the stage!”

Big Mom starts to fall into the sea…

Hakai (覇海) is an upgraded version of Hakoku (覇国). Big Mom and Kaidou have the same pose than Dorry and Brogy, but we see the attack from above them. The attack is devastating, probably the most powerful attack in all One Piece until now (in TOP 3 100% sure).

Supernova barely managed to escape the Hakai attack. Zoro used “Homurasaki” and “Rokudou no Tsuji” to slice down Prometheus. And Kidd took Big Mom’s attack on purpose so that he could ‘Repel’ the metals on his arm to throw her off.