Quintessential Quintuplets Movie to hit theatres in May 2022. 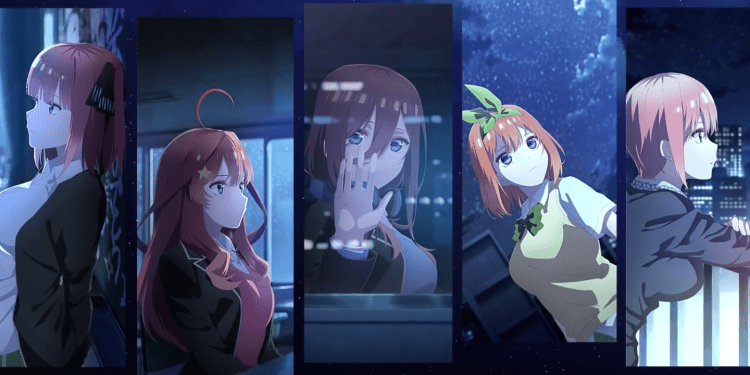 The love that harem anime receive is no joke. One of the most popular harem to have ever been created is Quintessential Quintuplets, an anime that defines the very essence of cuteness. As the fanbases of the Nakano sisters argue to debate who the best girl out of the five is, Bibury Animation Studios picked the anime for another release. As previously announced, the Quintessential Quintuplets movie will premiere in early Summer. While previously there was no determined date, a recent update from the anime’s staff has revealed the Quintessential Quintuplets movie release date. The anime movie is sure to bring about a huge scale of hyped-up fans who had been anticipating the movie’s release.

Futaro Uesugi, the private tutor of the quintuplets, will return with more situations of romantic crisis. The series is coming to its conclusion with the five stars making moves to win his love and attention. It is quite unclear if the movie will be the last of the anime series or if it will be followed up by another project. We are definitely yearning to know more about it on its release. Luckily, Quintessential Quintuplets release date is out and here is all that we know about the upcoming anime movie.

Several anime movies were successfully released in 2021. But what has fans on their toes is the set of brilliant anime movies set to premiere in 2022. On 29 December it was announced that the Quintessential Quintuplets will premiere on May 20, 2022. Masato Kinbo is taking over the movie as the director, replacing Kaori. It is to be noted that the anime movie will premiere in Japanese theatres. Pre-booking of the tickets is currently ongoing too. For fans who have been waiting impatiently for its release, it’s time to get really excited!

In addition to revealing the release date, a short PV was also uploaded featuring the main characters.

Furthermore, the anime movie also updated the second key visual of the anime.

It is to be kept in mind that the movie will only be released in Japan. There has been no mention about its international release so far.

Also Read: 19 Days Anime Adaptation: Will There Be One?