Queen Reveals Germa Science In Chapter 1035 of One Piece 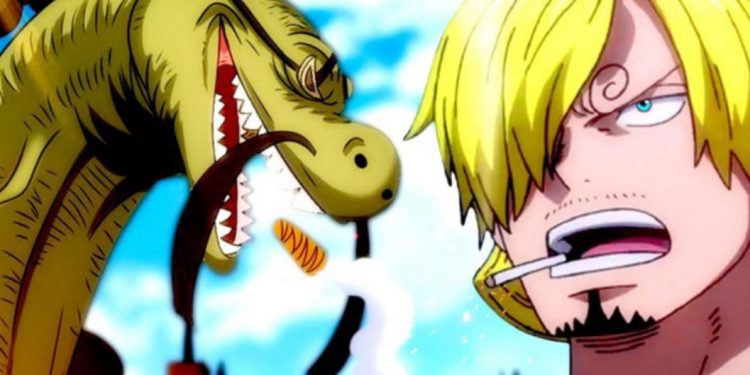 One Piece Chapter 1035 reveals Sanji Vs. Queen, that has been going on lately. That has begun in Pleasure Hall, in the Leftbrain Tower of the Skull Dome, where explosions were taking place everywhere. Geishas fled from the place, but Osome did not want to leave her pet Chuji. The other Geishas told her they were sure Chuji was fine and that if possible, they’d flee from the island to Wanokuni. From One Piece’s latest chapter, Momonosuke attempt to grab the Flame Clouds: Homuragumo. He thought it was a brilliant idea since he is also a dragon but could catch Kaidou’s Flame Clouds.

But If he couldn’t push the island back, he could at least stop it so that they could avoid the worst situation. He decided not to let it fall on the Flower Capital. The Beast Pirates want to escape the castle on the Live Floor, but the Samurai stop them. At the Pleasure Hall in the Leftbrain Tower of the Skull Dome, Queen attacks Sanji. Queen unleashes “Sparking QUEEN.” Queen fires a laser beam from his eyes. Sanji jumps and dodges it as he remembers Ichiji’s “Sparking Valkyrie.” Queen attacks again with Henry Queen.

Queen coats his body with electricity, stretches his neck to grab Sanji. Then he sends Sanji flying with a powerful electric shock. While being attacked, Sanji remembers Niji’s Henry Blazer and falls to the ground. Queen asked  Sanji if he understood that these are ”Germa 66” techniques he was planning to reveal to him after wearing his suit and that Judge’s children are the high point of his abilities. Queen shoots laser beams from his eyes at Sanji, who dodges.

Previously on One Piece Chapter 1034

Queen thinks he can defeat Sanji while he is using his suit. Queen extends his left arm with the exact mechanism that Yonji uses, catches Sanji. Queen reveals that he was playing dumb since he knows’ Germa Science. Sanji asks him to put him on the ground. Queen thinks that Sanji’s brothers’ abilities can be copied. Sanji reminds him not to treat his brothers like they are family. He remembers Yonji’s ”Winch Danton” while Queen spins; Queen makes Sanji crash with walls and doors at high speed as he spins around.

That makes Sanji bleed, but he uses a flaming kick. Sanji uses a flaming kick and destroys Queen’s arm after breaking the cable that connects it. He decided to offer free advice to Queen and that he must not talk about that guy’s name. Sanji hits Queen’s bell with a powerful kick that makes him bleed from his mouth. Sanji told Queen that there was no way his kicks wouldn’t work on him and that he was weakening too, which left Queen speechless. He also told him that he had already accepted his destiny. Queen reveals ”Stealth Black”, which is Sanji’s power.

But Sanji disappears, suddenly, a tiny mouse enters the room where Sanji and Queen are, but the two are invincible. Osome was also hiding, but Queen hadn’t moved from the room, so he could see Osome and tried getting closer to Osome little by little. He decided to punish Osome; Sanji is flying in the air and sees Queen approaching the girl and preparing to attack him. Sanji uses Exoskeleton, strength, and speed that makes his leg shines brighter and flames more powerful.

One Piece 1035 will be released on 19 December 2021. Sanji released frit Jambe: Demon-God-Wind-Leg and flies towards Queen while thinking to himself that Queen’s speed and strength are different. Sanji yells at Queen with a furious tone thinking that he has solved the mystery. He then realizes that he didn’t hit Osome; Queen did it while he was invisible. Sanji strikes Queen, who becomes visible again. Sanji then sends some attacks on different parts of the Queen’s body. Let’s look at One Piece Chapter 1035 official details.

You will be able to read One-Piece-Chapter 1035 online on Shonen Jump’s official website on Sunday. One Piece chapters are available on VIZ Media & Shueisha’s online magazine. The spoilers of One Piece-Chapter 1035 will be released during the week. Let’s meet when the One Piece latest spoilers are released.