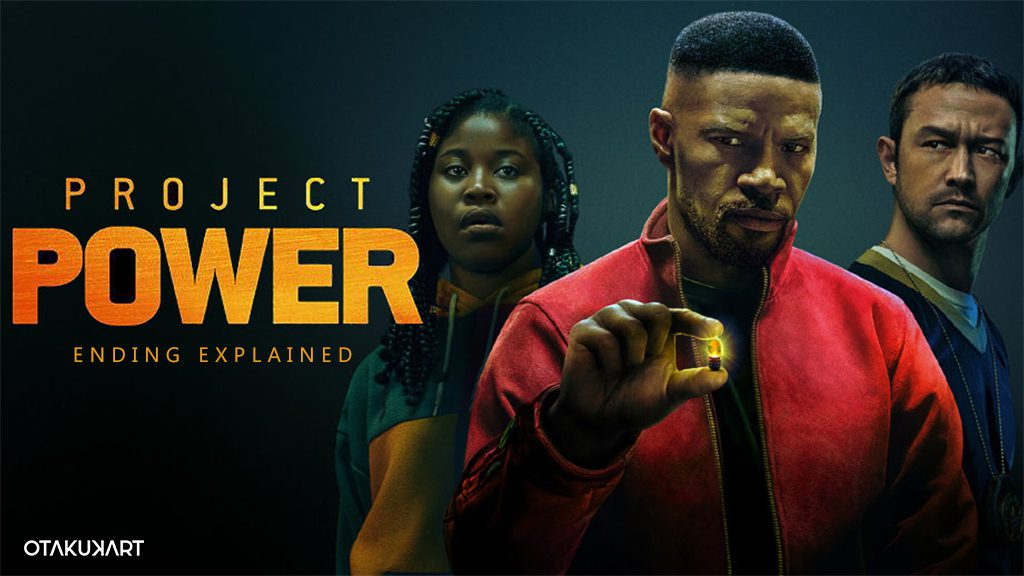 The 2019 American superhero movie ‘Power Project’ ending left many wondering what happened at the conclusion. This 2020 superhero movie is an original franchise and is not part of the DC or Marvel Cinematic Universe. Henry Joost and Ariel Schulman directed this movie, whereas Mattson Tomlin wrote the screenplay of this movie. The 114 minutes long movie came out on August 14, 2020. This movie features many talented actors like Jamie Foxx as Art, Joseph Gordon-Levitt as Frank Shaver, Dominique Fishback as Robin Reilly, and Colson Baker as Newt. Project Power presents a lot of heart-pumping action and thriller sequences throughout the movie.

The usual concept of superheroes is either that they are born with power, or somehow they got their powers because of an accident. This movie has a similar concept where the protagonist gets his power from a drug, but there is a time limit on using that superhuman prowess. Further, the movie received mixed praises from the audience and critics for the directing and writing. But the audience praised the performance by the actors. However, the ‘Project Power’ ending left fans with many questions in their head. Thus, we will explain the ‘Project Power’ ending in this article. Further, beware of reading this article as it will contain many spoilers. So to avoid spoilers, you can watch the movie on Netflix before reading this article.

What Happens In The Superhero Movie?

The movie is set on futuristic earth where superhero powers are no more something fictional but are a reality. However, these powers are only available after one takes a pill called “Power”. The story shifts to Newt, a drug dealer and his cousin, Robin, who is also a drug dealer. One day, some customers rob Robin for the “Power” drug. However, she was protected by detective Frank Shaver. He was a regular customer of Robin and also a detective investigating the source of the “Power” drugs.

Later, a mysterious man called Art was hunting for a dealer named Biggie when he came across Newt. The two break into a fight which leads to the eventual demise of Newt. Frank also stops a superhuman robbery from happening. However, he himself had to use the “Power” drug to stop the robber. But using the drug led to his suspension. But later, Frank’s senior informs him that the government is trying to shut down any investigation related to the “Power” drug. Thus, the senior officer informs Frank that Art is the source of the drug and he should go after him. 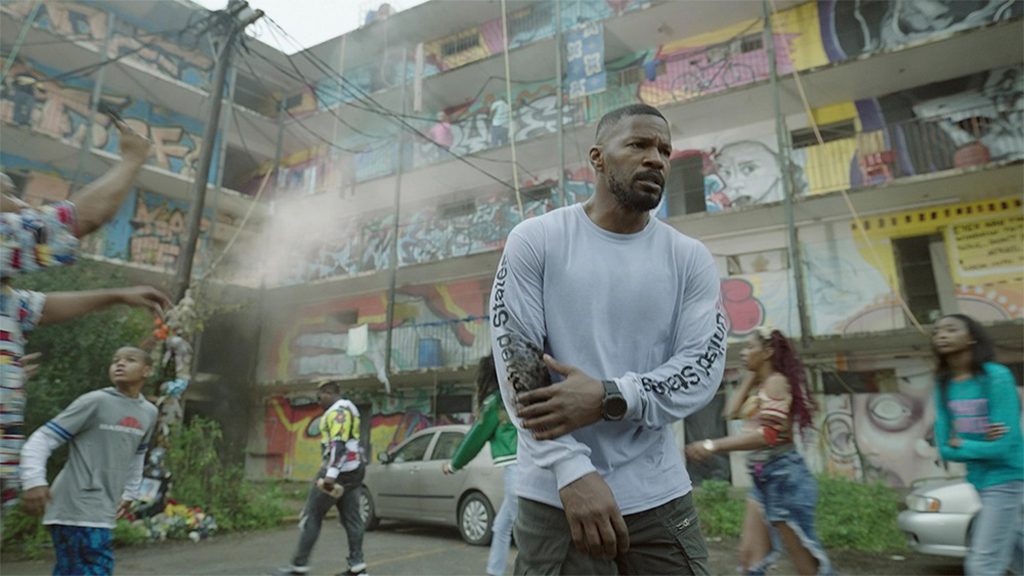 Meanwhile, Art kidnaps Robin and asks her to lead him to the safe house of the drug cartel. There he took down many of the cartel’s men while he himself got hit by a few shots. However, he discovers that the government is also involved in this “Power” drug and the people living in New Orleans are like lab rats who are using these drugs. Later, he forms a bond with Robin and tells her that he was once in the army. After quitting the armed forces, an organization called Teleios hired him. They experimented on him to develop these superpower drugs. However, Art had a daughter after undergoing the experiment. Thus, his daughter, Tracy, was born with powers, and she doesn’t need the drug.

Art and Robin finally succeed in finding Biggie, who claims the superhero drug is the way for humanity to evolve. However, Frank intervenes to arrest Art, and Biggie takes a pill and uses the opportunity to escape. However, he fails to escape, as Art eventually kills him. Later, Frank arrests Art, but he reveals the whole truth about the “Power” drug to Frank. Thus, Frank joins hands with Art and Robin. However, he let Art get captured, as Frank’s senior was also working for Teleios. Thus, he wanted Art to get to Teleios base, which is on a ship. Meanwhile, Frank and Robin will follow Art from behind.

Also Read: What is Jamie Foxx’s Real Name? A Surprise For Fans

What Happens In The ‘Project Power’ Movie Ending?

After Art gets himself caught by the Teleios, they take him to a ship called Genesis, which was the base for Teleios. Soon, Frank and Robin also arrive on the ship. While Frank and Art were taking care of the Tellios operatives, Robin was looking for Tracy. Eventually, they succeed in finding Tracy, and she reunites with her father. But during their escape from the ship, Dr. Gardner, the head of the “Project Power,” takes Robin hostage. She further depends on sparing Robin alive only when they return Tracy back. 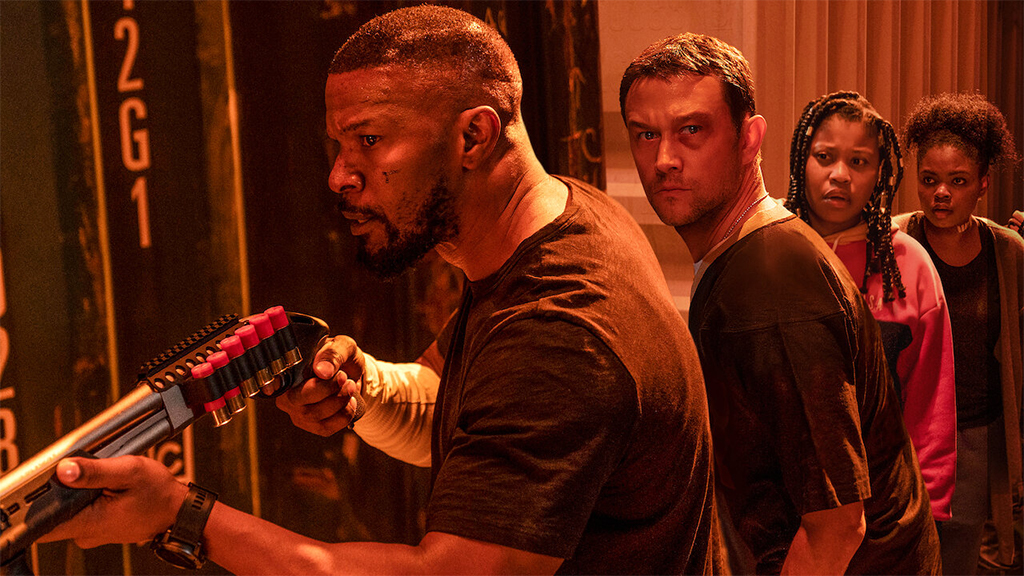 Art uses his superpower to take down Dr. Gardner and her soldiers but using his powers costs him his life. However, Tracy had the unique ability to heal organic matter, which she used to revive her father. After their successful escape from the ship, Art and Tracy leave afar to stay away from this mess. Meanwhile, Frank decides to expose the truth behind the “Project Power” to the whole world. And Robin sets on a new life to become a rapper.

The end of “Project Power” was fulfilling. However, there is still a doorway for the superheroes to return for the next installment as Frank decides to reveal the truth. Thus, he might face the government, which will try to hide their dark secret. So, there are possibilities that Frank will once again call upon the help of Robin and also Art, who might return from his solitude. But for now, there is no info available about a second sequel.

In this article:Power Project ending