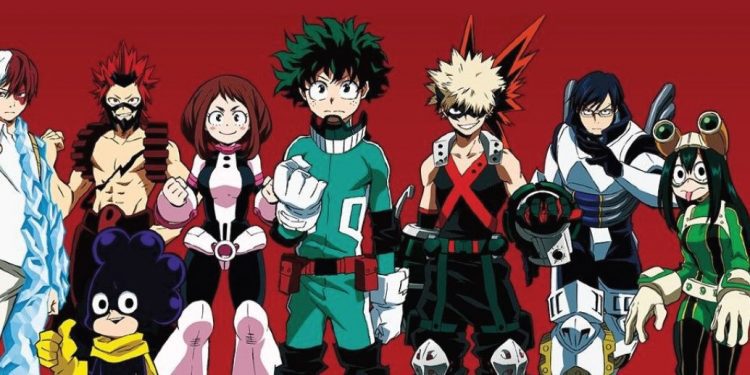 My Hero Academia Chapter 338 reveals U.A High’s traitor after Deku met with Aoyama. In villains’ territory, Dabi says that if the U.A High students find the traitor, they will get in trouble. But All For One believes that Aoyama’s parents are successful and nothing like that will happen since they know the outcome. All For One knows that he has other options if Aoyama’s parents fail and that he will find other disposable tools. In My Hero Academia’s latest chapter, In Deku and Aoyama’s side, Aoyama continues to cry, and his parent realizes that Aoyama might reveal the truth.

They took him away and decided to leave. While they take him away, Aoyama recalls his childhood and how his parents raised him. He realizes that his parent faces many obstacles, and they have suffered more than him trying to help him get power and be like other kids who have Quirk. Aoyama realizes that his parent searched for a rumored guy to give Quirks to the Quirkless people. But when he received his Quirk, it was not cooperating with his body. But things worked when his parent gave him a tool, and his Quirk activates.

Aoyama begins to get used to his Quirk, and Aoyama decides to accomplish his goal. But he receives orders from All For One and begins to serve him. Aoyama abandons his dream and continues to work for All For One. All For One manipulates Aoyama in everything he does and forces him to continue working for him. Aoyama enrolled in U.A High and still followed All For One’s orders. During that time, All Might was a teacher at U.A High. After learning about Deku’s letter, Aoyama finished thinking about his past and said he felt pain.

Previously on My Hero Academia Chapter 337

He realizes that he receives his Quirk from that guy. Aoyama cries and attacks Deku using a laser, but Hagakure uses her Quirk to block the attacks and deflect them. Hagakure asks Aoyama if he would have been happy if other students had been killed and remind him of the time he spent with them when he was still at U.A High. She also shed tears, and Aoyama’s parents tell Deku and Hagakure something, but they insist on taking Aoyama away.

Deku delays them by holding them back using Quirk: Black Whip. He told them that Hagakure was not hurting anyone, but they could leave. Later Aoyama and his family are somewhere tied with chairs. Nezu, All Might, Tsukauchi, U.A High students, and the other teachers are in front of them. They try to find what is happening and think why Aoyoma received the Quirk from All For One. Ojiro realizes that things would have been bad if Hagakure had not learned anything. Kirishima scolds Aoyoma asking him to tell the truth.

Tsukauchi asks them to explain everything about All For One. But Aoyama’s father says that they don’t know anything. He adds that they were doing what they were told to do and that All For One threatens them that they will lose their life if they don’t work for him, and if they fail, they will die. Aoyama cries and admits that he is the dirty villain. But Deku thinks that Aoyama is not evil since he helped Tokoyami and Bakugo during training, and he would have misled them and helped him help All For One. Deku reminds Aoyama that he is not crying because he is afraid of All For One, but he doesn’t want to betray his friends.

Also Read: The Final Showdown Between Musicarts In Episode 11 of Takt op. Destiny.

The Game Awards 2021: Where to Watch, Timing and Everything to Know