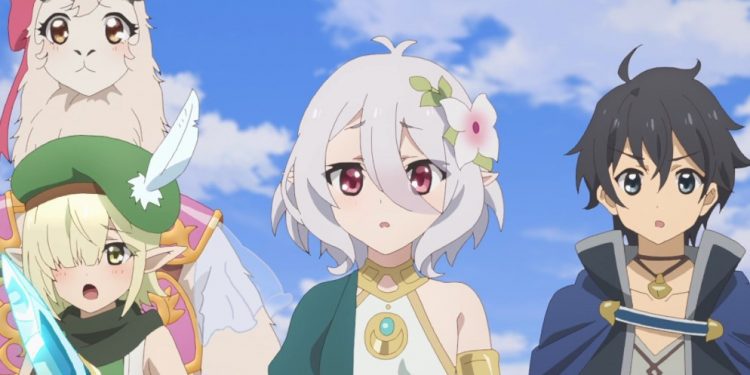 Princess Connect! Re: Dive Season 2 Episode 2 reveals the tale of Beastman and Princess living under the same roof. One of the Princess met with the Prince, chopping woods in the morning, and asked about Peco. The Prince reveals that Peco went to the market. The citizens enjoy living a peaceful life and doing their daily chores. Beastman Karyl wakes up and realizes that someone has called her for breakfast. Will Yuuki explore the Legendary Seasoning In Princess Connect! Re: Dive Season 2? The latest episode reveals a happy family that enjoys staying together despite their race. The family enjoys breakfast together after Karyl joins them.

Karyl reminds the girls about the leaking storeroom. Yuuki told the girls to leave it to him, and they realized that he had gotten better at fixing things. Karyl realizes that they have a wonderful family that they are used to, and everyone is happy. The blond Princess noticed that Karyl hates to eat veggies, and she always left them out every day. The silver-haired elf showed the girl a map that she had taken from the Guild Association the other day. She realized that the green elf gave it to her after completing the mission.

Miss Karin was impressed by her collections. The silver-haired girl told Karyl and the other that Miss Karin told her that the information would be useful to the Gourmet Guild. Yuuki knows that the map is leading them to a legendary seasoning. Karyl thinks it is a boring adventure and decides she will not be part of it. The blond Princess reminds Karyl that it is about a legendary seasoning and nothing is boring. She told her that they could try and remember the Gourmet Guild’s goal.

Yuuki and the others convince Karyl to go with them. They remind her that they are seeking all the delicious food in the world. The whole family heads to the forest and explores an adventure. They had fun traveling mountains and riding various monstrous creatures. Karyl realizes that her problem is that she is afraid of the mountains and dark forest. Yuuki stopped near the heal after seeing wild dogs barking at them. He embraces those wild dogs, and they act like a puppy. The wild dogs told Yuuki that they loved him, and he treated them well.

The girls were impressed by the way Yuuki handled the animals. But the other one always wants Yuuki to bring meat bites his hand, and the girls rescue him. They arrive at the village nearby, and the farmer realizes that they met with wild dogs. Yuuki gave him the map wondering if he knew the place they were looking for. The farmer realizes that it is hard to tell and thinks if he knows that place. He told them to be careful; since there were a lot of monsters around. The other Princesses learn that Yuuki has gone on an adventure at the Guild.

The guy with a long haircut told the girls that Karin approved Yuuki, and the others would complete. He also talks about the legendary seasoning that Yuuki and the girls are searching for. On the other side, Yuuki and his team arrive at a mysteriously beautiful place and realize that they have to collect food and other stuff to return with them to the Guild. They were excited to witness the fish that swim in the sky. Karyl realizes that it is good they came.

Princess Connect! Re: Dive Season 2 Episode 2 will be released on 18 January 2022. Yuuki and the girls mess up when they enjoy everything at once. Those wild dogs arrive and realize that they are hungry. The girls suggested cooking the dogs for dinner, and the dogs decided that they should run away with empty stomachs instead of getting cooked. Peco is disappointed that the dogs have escaped and won’t have beef for dinner since those dogs taste like beef. Let’s look at Princess Connect! Re: Dive Season 2 Episode 2 official details.